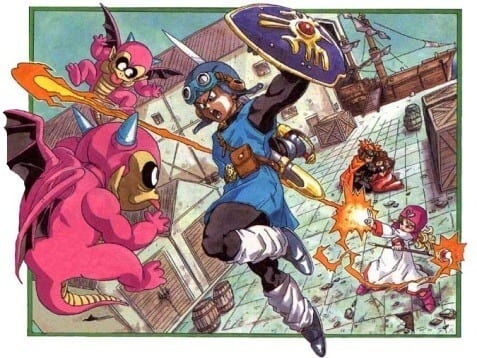 This is my second post on Dragon Quest 2: Luminaries of the Legendary Line. You can find the first part here. And you can buy the iOS version I played right here for just $4.99. Last time, I talked about all the different times I nearly quit playing this tough game, and how I was glad I stuck with it and finally beat it. Today, I want to dive deeper into what exactly made Dragon Quest 2 (kinda-sorta-maybe) worth the struggle!

So, without further ado, let’s dive in!

Killing Stuff With Your Cousins

The three main characters in DQ2 are all cousins–a princess and two princes (just like the Spin Doctors song!)–who are descendants of the hero from the original Dragon Quest. Set about one hundred years after the first game, I found DQ2 to be challenging (and even nerve-wracking) at times. However, the longer I spend away from the game, the more I realize just how much fun I had with it.

The appeal is pretty simple: run around the world and kill stuff with your cousins. Once you get strong enough, take down the bad guy and save the day! Sure, the story is a bit more complicated than that, but there’s your elevator pitch.

The combat in Dragon Quest 2 was probably my favorite part. The game expands on the combat system from the first, giving you waaaaay more spells to choose from. The Princess of Moonbrooke, by the way, is a great spell-caster. Early in the game, I learned that the AI wasn’t the best. There were several times my Hero or the other prince, the Prince of Cannock, needed to be healed and the Princess used the last of her MP to cast Dazzle on the enemies instead. Infuriating? You bet. But I quickly set her Tactics to Follow Orders and loved her much more after that.

In addition to all the new spells, Dragon Quest 2 also has more monsters to battle, more bosses to challenge, and lots more armor and weapons to choose from. While a (kinda-sorta) job system is present, it isn’t nearly as refined as the one in DQ3 and later entries.

That’s right, folks. While you get to hack n’ slash your way around Alefgard, taking out bad guys and slaying monsters, these baddies also get to kill you and your cousins. A lot. Specifically, the Prince of Cannock seemed to die…A BUNCH!

It was one of my main frustrations with the game and with the character. He isn’t as physically powerful as the Hero, and his magic just doesn’t cut it when compared to the Princess of Moonbrooke. His defense stats aren’t so great, either. It seemed like a bulk of the time, I was playing with the Hero, the Princess, and a Coffin holding the dead Prince inside. In fact, during the final battle, once the Prince died in the third round I didn’t use him at all.

And he doesn’t just die in battle. Oh no! This guy, who is super flaky and whines a bunch, also gets a bad case of (INSERT YOUR OWN MADE-UP ILLNESS HERE) and refuses to get out of bed if you stay at the inn in Beran. So, you and the Princess have to journey across the world to pick up an Yggdrasil Leaf and revive him. It’s the only way to get him back. Why was this in the game? I have no clue. It still feels out of place and is mostly just annoying. Pro tip: Don’t stay at the inn in Beran and avoid this whole mess.

Although the Prince of Cannock was a constant pain in my tuchus, the characters are overall an improvement over the original Dragon Quest. I felt like I was playing as actual characters in this one. In the first game, you only have to worry about the Hero. He’s the only person in your party, the only one who gets to eat Skill Seeds, and he’s the only one you have to worry about leveling up. DQ2 provides a much-needed party element and tries to add some personality to its cast.

Yes, Dragon Quest 2 was a struggle for me. In the last post on it, I talked about all my struggles in vivid detail. Overall, though, it was a decent entry in the series. In this one, the series seems to dive a bit into the silliness and fun that you see in the later entries. The Princess is a dog, for instance, the first time you meet her. The enemies start having pun-based names. And, as far as I can tell, it has twice as much puff-puff.

It’s also practically an open-world RPG, since you can take your ship to almost anywhere in the world once you get it. I sometimes found the lack of objectives alienating and boring, but for the most part, I liked the freedom of roaming around and discovering things on my own.

I found Dragon Quest 2 to be a fun but flawed, grind-heavy JRPG. And a fair word of warning: Malroth is one heck of a final boss. I know I said that last time, and I stand by it. I have battled many final bosses before, and this is the one that had me swearing under my breath and promising all sorts of bad things I was going to do to this game once I beat it. Side note: I did not, in fact, end up burning it inside a Dumpster as I had previously threatened.

If you’ve played other early Dragon Quest games, and especially the other entires in the Erdrick Trilogy, then you might want to try this one out. Otherwise, I wouldn’t start with it.

DQ2 is just simply too flawed for a first-time dive into the series. While it isn’t the worst entry in the series, it is far from the best.

If you’ve played Dragon Quest 2, feel free to share your thoughts with me. And if you haven’t and have questions, I’d be glad to answer them if I can. See you next week!