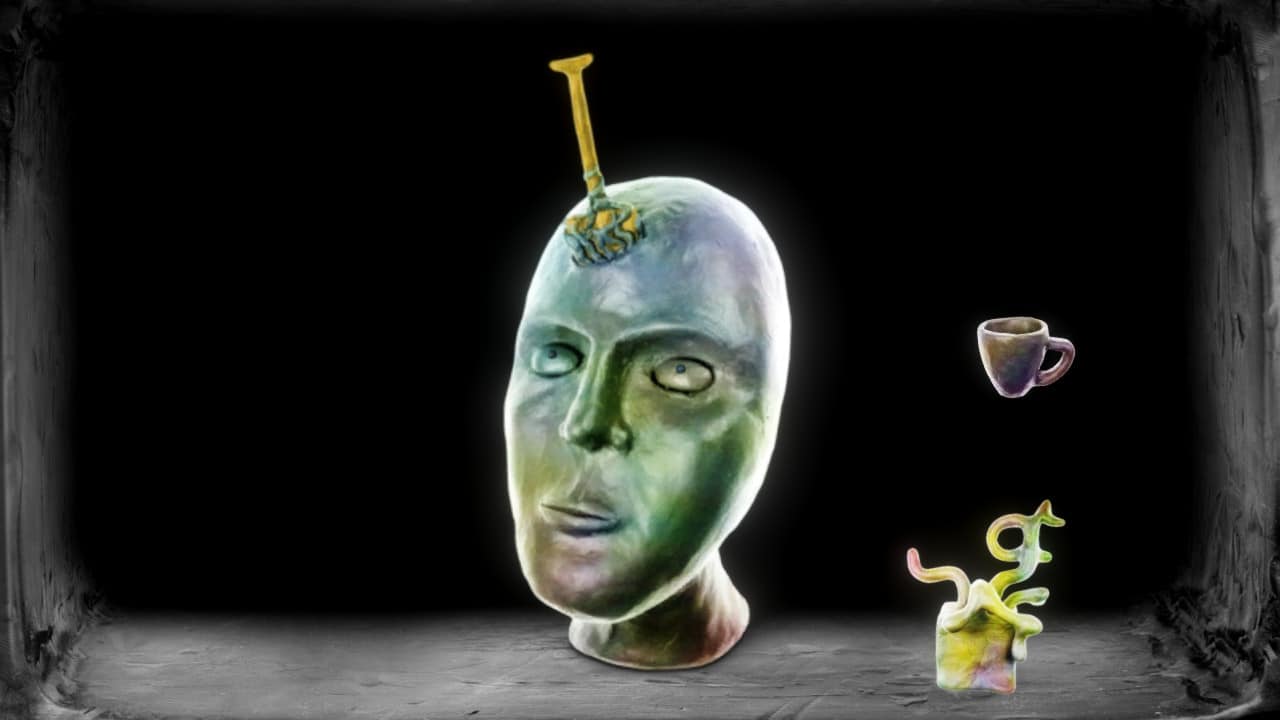 A code for this game was provided by Sometimes You.

Wurroom is a game that… is not really a game. What it is, exactly, is extremely difficult to describe. A brief, psychedelic experience created by Michael Rfdshir and Serge Bulat, Wurroom is a fusion of surreal art and meditative electronic music that recalls the works of stop-motion animators such as the Brothers Quay and Jan Svankmajer. It’s practically tailor-made for midnight movie aficionados – those strange people (like myself) who will spend an inordinate amount of time trying to convince their friends to watch weird Chilean movies from the ‘70s with them.

Playable only in handheld mode on the Nintendo Switch, Wurroom’s controls are as simplistic as they get. You control a disembodied hand that acts as a pointer/cursor, and you move the hand over objects to interact with them. There is a light puzzle element to these interactions, but experimentation is encouraged, and logic takes a backseat to the artistic presentation. See a rounded impression on the surface of a large cube? Try placing the pointer just to the side of it and perhaps the hand will push it in to reveal a new object that can be manipulated. Finding the correct spot to place the pointer can be extremely finicky, but there is absolutely no penalty for failing to locate the necessary prompt.

A description of the opening sequence effectively paints a picture (or molds a sculpture, to be more precise) of what Wurroom is like throughout. After a brief introduction showing the pointer hand’s place of origin (the game’s official description poses the question of whether the hand is just a hand, or the guiding force behind the game’s strangely serene, alien worlds), you are thrust into a scene with a golden shovel lying alongside a large, propped-up plasticine head. You use your finger to drag the hand over the shovel to pick it up, and place it over the head, where it is absorbed into the head by several tendril-like objects. As the head seems to adjust to its newfound sentience, a chair-like object crawls out of a hole in the wall and grows a valve. You pull the valve to release a cube of water before being forcefully thrust into the next scene. Needless to say, you’ll need an open mind going into Wurroom.

Wurroom forced me to reconsider how I approach reviewing video games. As a piece of interactive art, it excels at providing you with an all-too-brief visit to a dimension of wondrously weird sights and sounds. All of the objects on the screen were created using plasticine and animated with stop-motion. Try to imagine what The California Raisins’ most bizarre dreams might look like, and you’ll have an idea of what Wurroom is going for. The plasticine models are beautifully crafted and animate smoothly as they shift from one shape to another, often evolving into bizarre alien forms.

The game’s soundtrack is equally impressive, with Bulat’s music lending a reflective tone to the striking visual artistry on display. The visuals are often driven by the music in such a way that makes Wurroom feel something like an interactive concept album. It’s the sort of music that I would listen to by itself when in a contemplative mood, though I would have a difficult time separating it in my mind from the strange dreamscapes on display within the game. It is a joy to hear the music evolve along with the visuals as you progress through a stage, and you’ll definitely want to wear headphones while playing to best experience its richness.

Wurroom doesn’t misrepresent itself in any way, but that won’t prevent some gamers from being disappointed in the simplicity of interaction. It’s fun to interact with each object on screen to see and hear what happens when your hand pointer prompts it to become something else entirely, but it is occasionally unclear what to do to move beyond a certain point. More than once, I performed a sequence of actions multiple times to seemingly no avail, only for the game to suddenly move to the next “scene,” leaving me baffled about what I did to trigger the transition. While I was entranced throughout the experience, I was often unsure of what my interactions were actually doing as I used my finger to drag the hand across the screen over every object.

This sort of extremely art-centric experience is unique, but certainly not for everyone. The $0.99 asking price is more than fair for a 10-15 minute experience, but those on the fence might consider trying the Steam version first since it is currently free to play. Those solely looking for a game with clever puzzles need not apply, as Wuroom’s “solutions” often defy logic. I would not necessarily say that this game is an acquired taste; you just need to have an appreciation for a product that is almost entirely a sensory experience.

Wurroom is a strange, surreal, and wonderful journey through a world of astounding creativity. At $0.99, it’s the type of experimental product I would love to see more of on the Nintendo e-Shop. The ephemeral tour is not without its minor frustrations, but its dreamlike visuals will be floating through your mind long after you finish it. I played through it several times for this review, greatly enjoying each opportunity to experience the lush visuals and trance-inducing music, and I will most definitely play through it again.

But what does it all mean, you ask? The answer is simple: whatever you want it to.