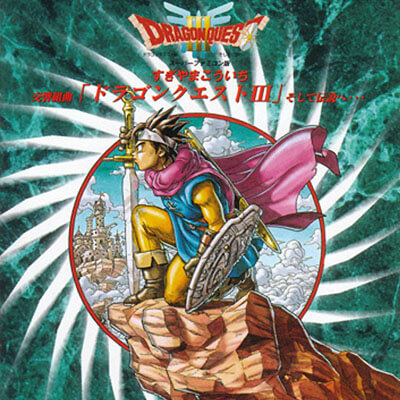 Last week, I talked about my early impressions of Dragon Quest III: The Seeds of Salvation and the fairytale influence in much of the game. I also talked briefly about a gorgeous giant bird you can ride, and all the towns that mirror places in our own world.

But now, it’s time to dive into the middle part of the game. As in a lot of JRPGs, DQ3 gets a little grindy at its midway point. But that’s not all–there’s also an unexpected twist. THIRTY-ONE YEAR-OLD SPOILER INCOMING!* You have been warned!

*Can it still be a spoiler if it’s been thirty-one years? I’ll let you decide.

One of my biggest complaints with Dragon Quest II was that it was super grindy. Most people told me DQ3 was better, but… I don’t think so. I think I grinded just as much–if not MORE–in this one than I did in DQ2. When facing Robbin’ ‘Ood for the first time, which is early in the game, I already had to grind for a couple hours to beat him. Oh, and guess what? It was totally optional. Didn’t know that. Wasted a bunch of hours. But I beat him. Oh, well. #hindsight

Other than that, the first part of the game was a breeze. Then I hit a few roadblocks in the mid-game. First, there was Orochi’s Cave–a hellish dungeon of fire that was thankfully very short since it had some powerful enemies. Maybe part of what made it so difficult is that the neighboring town, Jipang, doesn’t have an inn to rest up before diving into a dungeon with strong enemies and a pretty tough boss.

Seriously, Orochi gave me one heck of a fight. I came close to dying several times, but I made it out alive. Plus, I got a really cool new sword as a reward. I thought all was well, until I had to fight a stronger version of Orochi about two minutes later without saving.

Finally, much later, I arrived at the Cave of Necrogond. I was almost to the end of the game. The only thing standing between winning and me was one of those infamous Dragon Quest late-game caves. And while the Cave of Necrogond isn’t nearly as terrible as the Cave of Rendarak/Rhone in DQ2 (which is still the worst dungeon ever), I found myself struggling to get out of there. There’s quite a few twists and turns, and the enemies here ain’t no joke.

When I reached Castle Baramos at last, I felt like I’d ran a marathon. Seriously, it’s a bit of a slog to get here. It didn’t help that I got lost a bunch, either.

This last section is going to have spoilers. As I mentioned earlier, it’s been thirty-one years, so I don’t feel super guilty for sharing, but I still want to give you fair warning. If you don’t want anything spoiled, you should totally not read this last part.

Are you still there?

If you don’t want spoilers, turn back now!

So how’s the weather where you’re from? It’s sunny here.

Okay, last chance… spoilers are about to happen!

Hey, btw, anybody catch that SNL bit last week with the raw meat? What was up with that? Why did they use real meat?

I mean, I guess it’s hard to make fake meat look real? But c’mon, you could obviously tell it smelled really bad.

Oh, and hey, did you hear that Kenan Thompson might be leaving SNL if his new sitcom gets picked up? That dude has been on SNL for, like, sixteen years.

It won’t be the same without him. Who’s going to host all the game shows?

Okay…okay…let’s get back to Dragon Quest III.

Are You Still There?

Finally, with my party in good gear and well-leveled, I took on Baramos. He was a challenging–but not super difficult–boss. Compared to Malroth in DQ2, he was even a bit of a pushover. I beat him, he vanished, and then I went back home to celebrate with all my friends and family.

I was finally at the end of Dragon Quest III. The only thing I had to do was talk to the King and let everyone in town celebrate ME!

Or so I thought…

You see, there’s a twist at the end of this game. I had somehow avoided it all these years. Baramos isn’t really the final boss. The game does an excellent job of making you think he is, but then in the middle of celebrating, Zoma makes his existence known!

That’s right, folks! The true final boss has been revealed. So, I packed up my things and headed for a giant hole in the ground. I thought maybe I’d be in a final dungeon or something.

Wrong! You fall through this hole and end up in another world entirely! But not just any world! It’s Alefgard–the world from Dragon Quests 1 & 2. What the heck was going on? This game surprised me twice! I thought I had beaten it, but instead I was only 2/3 of the way finished!