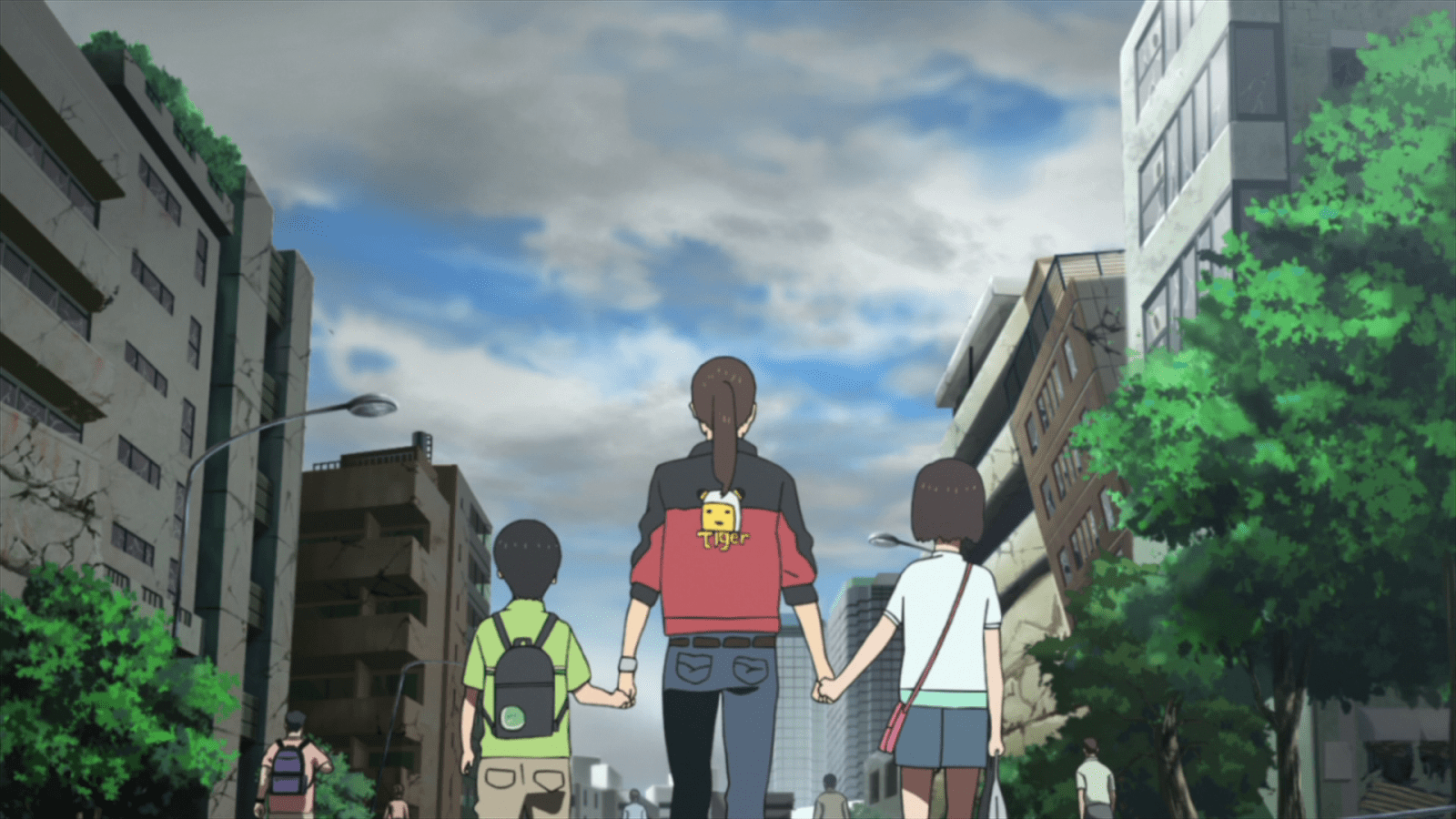 Tokyo Magnitude 8.0 is available to stream on Hulu, HiDive, and VRV.

When the world becomes inherently stressful, people’s taste for fiction tends to gravitate toward one of two directions:

And both of these are deeply useful as different forms of a release valve. I’m right there with the legions who fell headfirst into Animal Crossing and barely resurfaced for the first week, and I can absolutely relate to using heavier stories as a form of catharsis.

But some of the most pertinent stories for these times, oddly enough, are neither of these things.

That balance is what I adored about Tokyo Magnitude 8.0. Where it’s certainly bleak in places – as its subject matter absolutely demands – it never feels unnecessarily so. The very first imagery in the show – its title credits – certainly play up a post-disaster cityscape, presented in a monochromatic sepia that so overtly evokes another, very particular kind of fallout. The rest of it, however, is depicted as looking barely less bright than your average non-disaster television drama.

Presumably in no small part because we’re riding through this story from behind the eyes of a twelve-year-old.

And one who acts her own age, at that. Mirai starts as a bit of a brat before an earthquake throws the entire city off its balance, and she continues to be a bit of a brat afterward. Likewise, her kid brother Yuuki stays the same precious little naive sun-spot from his first moment on screen until his last.

In fact, the kids are easily the most resilient and stable force in the entire series.

It’s the adults that waver most – pinned down by the enormity of everything that’s happening.

Kids just assume that things will work out all right in the end.

It’s presumably why the show’s third lead – single mother Mari – would take two kids under her wing when she has her own daughter to get back to. Because it’s the right thing to do? Sure, that’s in line with what else we see of Mari. Out of some replacement-puppy syndrome? Possibly, given how immediately she takes on a parental role toward Mirai and Yuuki. But because the children act as much as an emotional lifeline as she does a physical lifeline? Almost certainly – Yuuki’s bright outlook just doesn’t exist in any still-coherent adult victim of a natural disaster, and even Mirai’s petty concerns can come across as quaint after you see a building collapse.

And as much as that hope is an understandable sentiment to want to have, it isn’t exactly a cure-all. More often than not, hope complicates things.

Mari subsists on what little information she can get through news broadcasts on her phone – ahead of the curve for 2009, even with the show being written out of thorough-if-speculative research. She looks for any sign suggesting her family’s safety – and gets secondhand reports that present-day viewers are all too aware can be spun depending on the source. And while that outlook may be enough motivation to keep pulling her homeward, she’s moving forward based on something not entirely reliable.

The reality of their multi-day trek across the city would be more telling.

And even though its harsher edges are filed off, leaving Tokyo Magnitude still feeling a bit safe, it never completely looks away. We’re shown a shop window smashed and inhabited by pests – could be from aftershock damage, certainly, but the next thought it brings to mind is of pillagers and thieves. Bodies are ever-present, both in morgues and in hospital overflow where nobody can get the attention they need, and the children are hurriedly ushered away. And there’s an uncomfortably long shot of someone emotionally unable to identify a potential family member among the deceased.

But even more than the dismal, tangible fallout of a natural disaster, the series spends most of its time dwelling on the slow, unpleasant process of recovery, aggravated by ordinary people focused inwardly on their own immediate needs. It’s a conga line of first- and second-responders trying to speed people through the aid process as quickly as possible, ultimately to a cold and crass degree. It’s a displaced man taking the last bit of food from right in front of a child, with the hanging ambiguity of whether they were bringing their spare portion to an injured family member or hoarding in fear of having enough to eat tomorrow. And it’s Mirai having to contend with food poisoning in the middle of a public park, unable to reach even an emergency bathroom due to overcrowding.

Not always the kind of dramatic dust-in-your-eyes moments.

But always the kind of disparaging, dogged problems that would plague on a disaster victim day after day after day.

And seeing the frog boiled in that way that makes Tokyo Magnitude 8.0 feel grounded. It’ll hit hard at times, and it’ll lull into a sense of uncomfortable peace at others. Nobody ever feels especially fine about their situation, let alone genuinely optimistic – nobody older than eight does, at least. But they pull on the same unwashed clothes each morning, slap a fresh bandage over their blisters, and keep walking.

Even and especially past the point where they would’ve been felt defeated before any of this.

Not because they’re stronger or more positive. Just because that’s what’s in front of them on that particular day. It’s necessity-driven, but it’s still perseverance. Sometimes to a deadly degree, as when someone jumps in the harbor chasing the last ferry, or hides their injuries so as not to slow down the group.

Which can be every bit as valuable to see as acknowledgements that these situations are tough and painful – in varied and equally-valid ways – or upbeat ways to break away from that negativity for just a little while.

Different people need their own ways to stomach harsh events, certainly. But more often than not, we’re not confronted with single-event troubles. We’re put into long-lived situations.

Problems from this month will regularly live on to next month, are inherited from the last, and are rarely easy to solve – sometimes impossible. There are aftershocks, and even between those, lingering effects to contend with at nearly every step. To an ongoing situation, the longest-lived response isn’t to escape nor to wallow.