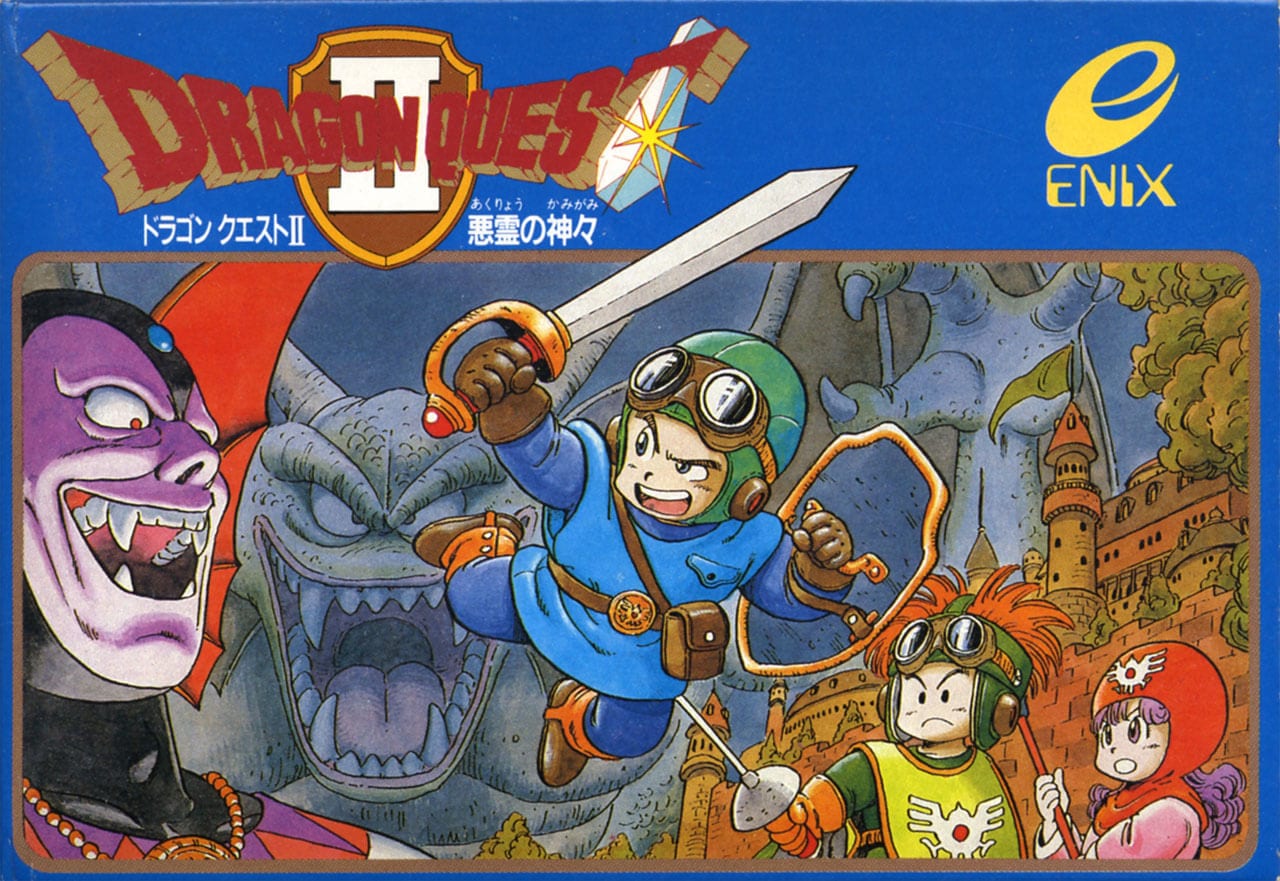 Murder by Malroth: Dragon Quest 2 and the Time(s) I Almost Quit

I loved DQXI and I had a great time with DQ1. I was expecting to love DQ2, too, since it gave you a 3-person party and expanded on gameplay and combat from the original. I managed to snag it on sale from the iOS App Store during the holidays for only $2.99. You can grab it here too, where it’s normally priced (at still a great deal) at only $4.99.

Dragon Quest 2: Luminaries of the Legendary Line is a game I had already heard a lot about before playing it. To a lot of players, it seems to be the black sheep of the Erdrick/Loto Trilogy. The first one, after all, practically launched the JRPG genre and Dragon Quest 3 is a beloved and certified classic. Dragon Quest 2 just doesn’t seem to get as much love. So, I approached the second part of the mainline series with an open mind and cautious eagerness.

Let me get this out of the way: Dragon Quest 2 is a good game. I had a lot of fun playing it. Is it flawed? You bet. Is it horrible? No, and I don’t think it deserves the hate that some folks are eager to sling its way.

While it isn’t my favorite entry in the series, DQ2 still has its merits and still gave me an overall enjoyable gaming experience.

Let’s Begin, Shall We?

The story of Dragon Quest 2 is very similar to its predecessor. One hundred years after the events of the original Dragon Quest, you are the descendant of a legendary hero (the hero from DQ1, by the way) and once again darkness is overtaking the land. An evil sorcerer named Hargon has already destroyed one kingdom and has his eyes set on destroying a lot more. It is your job to band together with your royal cousins and defeat the evil sorcerer Hargon once and for all. Sounds fun, right?

The cast this time around includes our Hero, the Prince of Midenhall, and his two cousins. There’s the Prince of Cannock, a flaky dude who is hard to track down at the beginning of the game–and one who was personally a pain in my butt long after he joined the party (more on that later). Then there’s the Princess of Moonbrooke, the survivor of Hargon’s initial attack, and a pretty awesome spell-caster.

Early on, I liked Dragon Quest 2 even better than the original. I liked that the characters had more personality, that there was something close to a job system, and that it had more spells and gear. The world was also bigger–or at least it had a lot more things to explore.

But Then I Almost Quit…

I enjoyed most of the game until I tried to find the Sunken Treasure. It was a frustrating and arduous part of the game for me. I had talked to NPCs, I had gone out to the area where the treasure was supposedly sunken, and I couldn’t find anything. I ran around some more, thinking I just needed to advance the story a bit more, but after another three hours I still had nothing.

Now, Dragon Quest 2 is basically an open-world RPG. Once you get your ship, you can sail around to dozens of places. There are warp pools you can step in that send you to other parts of the world, and as long as you are strong enough to fight the enemies in certain locations, you’re essentially free to go wherever you want–with only a few exceptions. This means finding things like the Sunken Treasure can be a bit tricky, since sometimes you show up in an area you aren’t technically supposed to visit until much later.

Eventually, I gave in and started searching the internet for ways to find this treasure. There were a few obstacles:

(1) Most of the information online was from earlier versions. I was playing the iOS version, and pretty much everything is slightly different on there.

(2) The biggest obstacle is that names in the iOS version are different from some of the previous iterations. This meant cross-referencing the names in my game to those in the videos and FAQs I found online.

(3) The location of the treasure, according to people on Reddit, had changed slightly from the original to the iOS version. The animation was also different. So, maybe I was searching in the wrong spot from where the videos told me to look.

(4) Even after reading all these FAQs and watching all the videos, cross-referencing everything, and spending WAY too much time on Reddit, I still couldn’t find the Sunken Treasure.

So what did I do to find it?

To this day, I’m not sure if it was a gaming bug, if I was doing something wrong, or if I was overlooking something. I sent countless texts to B.J. during this time, proclaiming I might have to quit this game and earn an asterisk beside my “Year I Played and Beat Every Mainline Dragon Quest Game” title. Thankfully, I was finally able to get past it and eventually beat the game, too.

And you want to know what really gets me? Afterwards, I found out that even though it’s a good idea to get it, the Sunken Treasure part is OPTIONAL. That’s right, folks: optional. As in, I didn’t have to do it. As in, I totally could’ve spared myself the pain and agony. I wasted some serious hours in Dragon Quest 2 trying to find this treasure, and this bit of news was like salt in my open, angry wounds. Oh, well, maybe I’m a better person for having done it.*

Once I got past the Sunken Treasure, I started enjoying the game again. I wondered why I had ever been so close to quitting in the first place. Everything was blue skies and green pastures.

But Then I Almost Quit…Again!

Besides almost rage-quitting over Sunken Treasure, I came really close to not beating the game. I had made it to the Cave of Rendarak, you see, which is still probably my least favorite dungeon of any game I have ever played.

The Cave of Rendarak is notorious for its difficulty. I didn’t know that at the time, since I was trying to play through the game without spoilers. But, boy oh boy, let me tell you: it is super difficult.

First, there are infinite loops/endless staircases. So you can spend hours and days and weeks just getting lost in this cave. Sounds fun, huh? Thankfully, I had learned from my mistake in the original Dragon Quest and managed to avoid a lot of these by being sneaky and looking at a FAQ the entire time.

Secondly, there are pitfalls. There’s no way to know where they are without looking at a FAQ. You’re just strolling through the cave, and then–BLAMO!–the floor opens up and you fall into the basement, get attacked by really strong skeleton monsters, and maybe even die before you can find your way back to where you started.

To get past this, I made frequent use of the Quick Save function on the mobile port. It was pretty much cheating, yes, but it got me through the cave. I would make a quick save every ten steps or so, and if I fell into a hole, I’d reset the game and avoid the pitfall the next time. I’m sure that means I lose some sort of gaming cred, but I MADE IT THROUGH, DAGNABBIT!

Lastly, the enemies in the Cave of Rendarak are pretty tough. The difficulty curve in Dragon Quest 2 is insane. It starts off relatively easy, with some periodic grinding needed to advance the story. Then, it turns into this stupidly hard game where all the enemies are overpowered and get multiple turns and want nothing more than to send you to a GAME OVER screen before you can so much as yell, “Oopsie Daisy.”

When I finally saw sunlight again, I wanted to jump around and dance. If it was Enix’s intent to make it feel like you really earned something upon exiting the Cave of Rendarak, then they succeeded. I was super proud of myself. And now that I was nearing the final dungeon, nothing was going to stop me from beating this game once and for all!

But Then I Almost Quit…A Third Time!

This post is getting a little long, but I promise I am almost finished. The third and final time I almost quit, I had reached the final boss of the game. Hargon wasn’t exactly a tough fight, but the real surprise came when I tried to leave the area. Hargon uses his dying breath to summon Malroth, and then the true final boss fight ensues.

Malroth is one heck of a final boss. I had grinded up a lot of levels before trying to tackle Hargon, so I assumed I was prepared. Well, I wasn’t.

The first time I took on Malroth, he wiped my party in about four turns. I went back to the castle and tried again. This time, I got pretty far, but his back-to-back fire breaths just obliterated my party if I wasn’t careful.

After four failed attempts, I grinded for several more hours until I had gone up another eight levels. I was confident I could take on Malroth this time. But then Malroth showed up and was like, “No way, buddy!” And with a snap of his fingers, I died over and over again. I don’t know if I was just terrible at this particular fight, or if I had some really bad luck. Either way, it took me FOURTEEN tries to take him down.

Make fun of me all you want, but I finally beat him. And you know what? I’m still convinced most of it was luck. So many of his attack patterns seem to be based on RNG that I’m almost positive I’m right. The Prince, who generally dies a lot in this game anyway, pretty much stayed dead the entire time. I had the Princess constantly heal herself and the Hero, and then used the Hero to chip away at Malroth a bit at a time. Once I wasn’t worried about keeping my whole party alive, the fight seemed much easier.

Malroth was defeated. I got to see the ending. And I have never felt so accomplished in my entire life. Seriously, this game takes a toll. But if you stick it out and power through, it’s well worth it.

I’m nowhere near finished talking about Dragon Quest 2, but this post has gotten too long. Next week, we’ll dive into it even more. In the meantime, I hope you’re out there playing a Dragon Quest game! And if you’ve played DQ2 or any of the others and want to talk about it, leave me a comment!