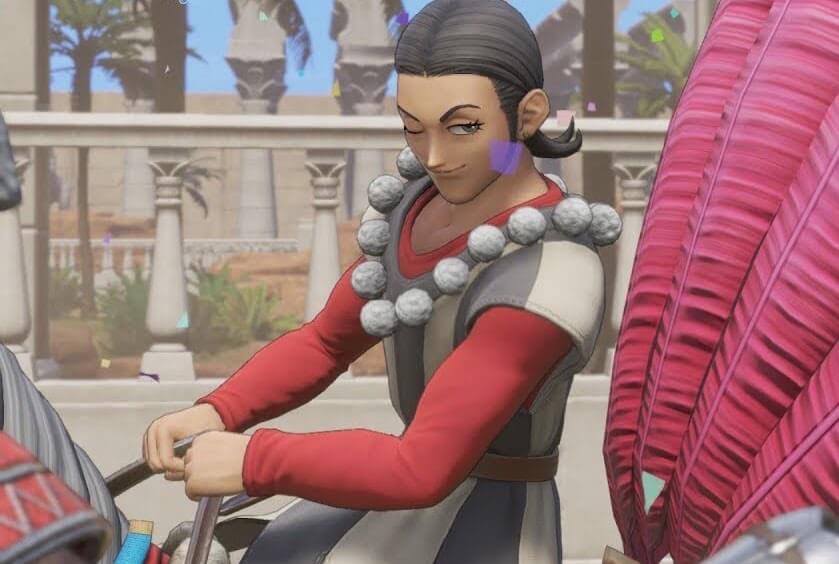 Back in the Saddle: Horse Racing and Mini-Games in Dragon Quest XI (S)

That’s right! My “Dragon Quest” Quest is back, and since (like Dragon Quest) I love puns, I thought this was a perfect way to get back into writing about all my DQ shenanigans. “Back in the Saddle?” Get it? Get it?

Are you still there? Okay, cool. Let’s jump right in and talk about some fun mini-games in Dragon Quest XI (S)!

I know I’ve talked about this before, but I loved the horse racing in XI (S). I’m not usually a fan of racing mini-games. I either suck at it and get frustrated, or it gets repetitive and boring.

I think the horse racing in XI (S) is the perfect balance of challenging without being difficult. Sure, it takes a little effort, but I pretty much always won on my first try. And if you have the golden reins, you can blow through the races in no time at all and get the rewards without even trying.

And, thankfully, horse racing has some good rewards, but it’s not something you HAVE to do to advance. If you want a super great sword or a swanky outfit, you’ll need to it. But if you’re just playing for the story and want to skip horse racing, you totally can.

The Wheel of Harma

And speaking of things that are fun to do but you don’t HAVE to do, the Wheel of Harma is great. It’s a gauntlet of battles that require strategy and (sometimes) the right amount of luck to win. If you want the best items, you also have to win within a certain amount of rounds.

I had a blast with the Wheel of Harma when I was playing the PS4 version of XI, and I’ve had a good time with the one in XI (S) as well. It has new additions and additional prizes, so check it out!

I have an entire post dedicated to Tockles, Tickington, and pastwords, but I still wanted to include it on this list since it’s technically a mini-game. For me, looking for Tockles and their “pastwords” was a highlight of the new content available in XI (S). Like mini-medal hunting, it appeals to my desire to collect stuff and explore every nook and cranny in a video game.

The Altar of Ages section is a lot of fun, and I enjoyed all of the Tickington quests. You get some cool items and equipment for doing them, including a red leather bodysuit for Serena that looks a lot like the one Brittney Spears wore on Mars in her video for “Oops!… I Did It Again.” Seriously, Google it if you don’t believe me.

There’s a ton of stuff to discuss when it comes to Tickington. I have a LOT to say about them.

In Dragon Quest XI, you collect mini-medals but you also collect mini-medal stamps. You even get a trophy in the PC/PS4 version for completing the third (but not final) page of stamps. It’s like two mini-games for the price of one!

The headmaster of the pseudo-French school for girls rewards you periodically. As you bring in certain amounts of mini-medals, he stamps your page and gives you a reward. Did we really need them to add stamp collecting to the mini-medal mini-game? No. But do I like it? Yes.

Down and Out in Octagonia

One of my favorite parts of XI (and XI [S]) is the casino. And while the first one in Puerto Valor is nice and all, the second one in Octagonia is where I spend my time. In fact, out of almost 100 hours of XI (S) so far, I’ve easily spent ten of those hours at the Octagonia casino. It’s why, despite being arguably the ugliest town in the game, Octagonia is probably my favorite city.

Specifically, I love the roulette tables in Octagonia. There’s a side quest that involves hitting a jackpot, which is the only reason I even gave roulette a shot the first time. But in the year since, I’ve come to love roulette in this game. As soon as it was available in XI (S), I played it for close to two hours. Seriously, I love it.

And I can quit anytime I want!

Other Stuff to Do

There are plenty of other things to do in XI (S) that you might consider a mini-game. Whether you want to fill up your bestiary like I do, want to get +3 on every forged item, or something else entirely, there’s almost always something to do in Erdrea. Dragon Quest XI is massive in scope, and XI (S) is even massive-er. It’s so massive, I couldn’t even use proper grammar to describe it!

Anyway, thanks for reading, and it’s great to be back!