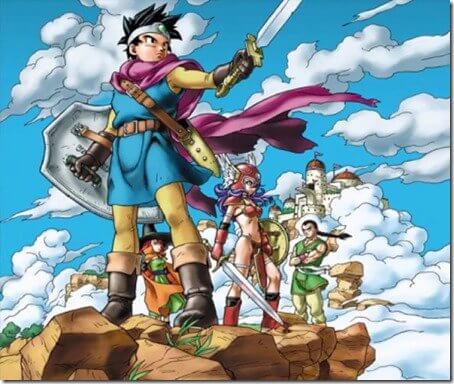 This is the final post on Dragon Quest III: The Seeds of Salvation. Last week, I warned against spoilers for the last half of the post. Well, this whole post is basically one big spoiler. I know this game is thirty-one years old, but if you want to play DQ3 without any prior knowledge, then this post is NOT for you!

If you’ve played the game before and want to reminisce, then great. Or if you just want to read about the final leg of our Hero’s journey, then that’s cool too. But seriously, lots of spoilers ahead!

So, now that our Hero has fallen into a massive hole and ended up in Alefgard–the world from Dragon Quest 1 & 2–the game has a completely different feel. The world is engulfed in darkness, and the true villain and final boss of the game, Zoma, has revealed himself.

First: It’s nice being back in Alefgard. Running around the towns you’ve seen in previous Dragon Quest games was a lot of fun. You’re also in the past, years before the first or second Dragon Quest, so it was super cool finding Easter eggs in the towns and overworld, whether it’s a scientist who’s building the boss you have to take down in DQ2, or a bridge that the Hero breaks, thus explaining why the bridge is out in a future DQ game. Pretty cool, huh?

Time-travel and inter-dimensional travel aside, the last leg of Dragon Quest III is a good time. At first, I was a little overwhelmed, since I thought I had beaten the game–only to be thrust into another 10 hours of gameplay. Admittedly, it takes some getting used to, wandering around your old stomping grounds from DQ1 & 2. Once you get used to it though, it’s definitely one of the highlights of the entire game.

Remember in a previous post when I said this game was really grindy? Well, this is the part where the real grind kicked in. Before taking on Zoma, I had to level up my characters for probably close to four hours. I’ll admit, it wasn’t the funnest time I’ve had in a Dragon Quest game. Mostly because I was ready to finish this thing already!

Don’t get me wrong–I loved Dragon Quest III. But after playing for hours after I assumed I’d beaten the game, and then having to grind even more before fighting the final boss, the game started to feel a bit tedious.

When I was finally powerful enough, I entered Charlock Castle–the final dungeon from previous DQ games–and walked through familiar hallways to try to get to Zoma. The enemies were powerful, and the bosses were even more intense. There’s even a brief scene where the Hero is finally reunited with his father, the great warrior Ortega. The reunion is brief and doesn’t carry the kind of emotional weight that it should, but it’s still a nice touch.

After a long series of events, the true ending of Dragon Quest III reveals A LOT! Not only does it perfectly set up the next chronological game (which is actually Dragon Quest 1; confusing, huh?), but players finally learn that the Hero is in fact THE legendary hero Erdrick!

I’ll admit, I knew the spoiler about Erdrick going in, and I still found the ending cool. While I don’t think Dragon Quest III is my favorite game in the series, it’s still a nice entry with a good job system and a good story. I think it probably serves as a good introduction into the series as well, if you want to start with one of the older games. Otherwise, start with Dragon Quest XI.

Did I leave something out? Do you have a fond memory of the game you’d like to share? Let me know in the comments.

See you all next, where I talk about Dragon Quest VII! Cue the intense, cliff-hanger music!