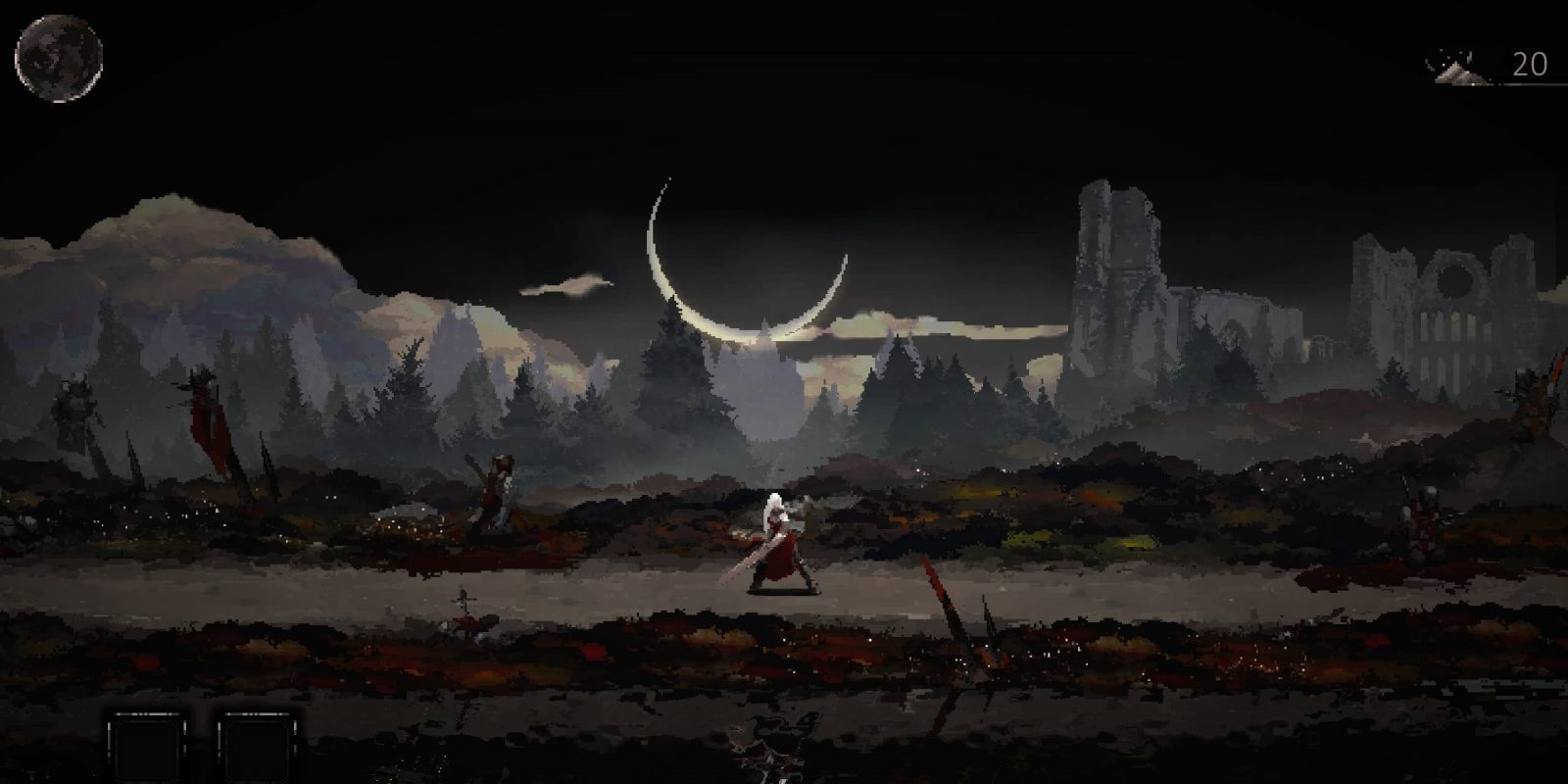 In the void left by E3 this year, many organizations have stepped in to try and fill in the gap. One of the biggest of these was IGN. On June 10th, IGN hosted two events to showcase upcoming games: the IGN Summer of Games Expo and the Freedom Games Showcase. The great thing about these events is that many of the games shown have demos available to play right now!

Here at Geek to Geek Media, we rounded up some of the most interesting-looking games from the expo and tried them out. Check out our impressions below and feel free to let us know what you think if you take one of these games for a spin!

Have you ever been playing a Castlevania game and thought to yourself, “This isn’t gothic enough for me!”? Then you’re in luck, Moonscars has got you covered. This grim Metroidvania sports gorgeous pixel art and highly detailed animations. It caught my eye right off the bat during the showcase. With weighty Souls-like combat, this game promises to be a challenging spooky adventure.

Moonscars’s demo is quite short and doesn’t explain much of the game’s story; just as I started to feel like I was coming to understand what was going on, the demo was over. However, it still provided ample opportunity for me to get a taste of the gameplay. I found that the combat was tough but satisfying once I got the hang of it. There’s also an extensive skill tree that allows for character customization; I only got to explore the base of one branch in the demo but I’m keen to see more. Adding this game to my Steam wishlist was a no-brainer for a Metroidvania junkie like myself!
– Capsulejay

Trail Out is an arcade-style racing game with a heavy emphasis on causing destruction. It features a campaign in which you earn money and followers to reach the top of the Trail Out festival. The game features a (cheesy) story with cutscenes to give each racer in the festival personality. Races take the form of both traditional contests for first place and destruction derbies. Like any good game about car destruction, the action is set to a headbanging rock soundtrack.

The demo for this game is a beta build but allows you to play the first 5 hours of the campaign. In the hour I spent with it, I tried out various cars and played through a few races and derbies. The story, from what I was able to see, is a pretty cliche “rise to the top” affair with rivals from around the world that feel very stereotypical (in a 90s arcade game kind of way). Currently, the game feels a little rough around the edges but I definitely still had fun with it. If blowing up cars to the sounds of metal music sounds like a fun afternoon to you, be sure to check out this demo.
– Capsulejay

Tyrant’s Blessing is a tactical RPG with smallscale battles that sit somewhere between Into the Breach and Mercenaries Saga. With a team of only 3 soldiers (and one adorable pet), every move counts! Adding to the challenge is the fact that every time you move your character, an afterimage is left behind. For the next turn, the afterimage can be attacked by enemies, causing damage to your character. Thus, it’s just as important to be mindful of where you’ve been as where you’re going.

The demo gives you access to a pretty good sample of the game. In my hour with it, I played through 4 battles that took place on varied terrain. I liked the puzzle-like nature of some of the stages that featured traps and warp tiles. Many of your attacks can push enemies over a square or two which can also change the flow of battle. Since this game is a Rogue-lite, when I failed my fourth battle, I was sent back to the first conflict but got to keep all the character upgrades I had earned. This made the loss far less discouraging. Overall, this is a tight tactical RPG that I would highly recommend to fans of Final Fantasy Tactics or Fire Emblem.
– Capsulejay

The Last Worker is a first-person adventure game set in a product fulfillment warehouse in the dystopian future. As the last remaining human worker in the warehouse, you initially start off performing menial tasks but soon get drawn into a conspiracy that has you breaking the rules of the workplace. Sneaking around the warehouse to uncover its secrets promises to pull you into the greater narrative.

The demo for this game is fairly barebones in terms of gameplay but does a great job establishing the game’s tone. The first of the two levels in the demo is a basic tutorial but kept me engaged with the witty banter between the protagonist and his AI companion. The second level introduces stealth mechanics in which you avoid security robots in order to access off-limits parts of the facility. Overall, it’s a short experience but a promising introduction to the game’s world. I was particularly impressed with the combination of humorous dialog and social commentary in the script. I also liked the comic book-like graphical style. If you’re into games like Portal, I’d recommend giving this one a look.
– Capsulejay

There Is No Light

As you would expect from a game titled “There Is No Light”, this game is both bleak and brutally difficult! It’s a top-down action RPG with set in a dark and uninviting world and Dark Souls-inspired combat. Particularly of note is this game’s detailed pixel art which really brings its foreboding environments to life. The game’s cut scenes are in a minimalist black-and-white style punctuated with bits of red (similar to Sin City) and no dialog. It’s up to the player to interpret the story based on these scenes, NPC chatter, and notes found throughout the world.

This demo appears to drop you right in at the beginning of the game and offers access to both the introductory area and first dungeon. Compared to many demos, this one is a meaty experience. I played for a little over 2 hours and still haven’t seen everything it has to offer. In that time, I was able to get a feel for three different types of weapons and pick up some clues about the game’s story. I found the challenge level to be quite high, having to try some battles multiple times even on easy mode. This is a great demo to try out if you’re looking for a hardcore experience to sink your teeth into.
– Capsulejay

Monorail Stories by Stelex Software comes with a hook-y pitch: two asynchronous protagonists sharing the same narrative-game space. The promise is that this allows for a push-and-pull multiplayer story, even letting Twitch streamers collaborate with their audiences. And, for those playing alone, each character leaves enough breadcrumbs about the others’ environment to make meta-choices toward one of ten endings.

Unfortunately, the demo for this one is brutally short and straightforward – one play-through takes ten minutes at most and doesn’t leave much space to see the full ramifications of your actions. For now, that leaves us with a promise and a hella charming art direction. I’m excited to see if this one can follow up on its potential.
– Data_Error

Appnormals’ Terracotta is like the best of puzzle games; it starts out almost physically slow, but quickly grows in complexity. The key is in switching between two “worlds” – in one, you move slowly and use spiritual energy to manipulate the world. In the other, you move fast but have little to no such control. I found that this forced me to be more deliberate and plan out solutions in a satisfying way.

Its poetic-if-wordy story aside, the game is a showcase of gorgeous pixel art on one level, and a test of spatial reasoning on the other. If navigational puzzlers are your thing, Terracotta is absolutely worth a test drive.
– Data_Error

Boundless Games’ Monster Tribe seeks to carve its own niche among the “monster collection” sub-genre. Following a more skirmish-tactics approach to battle and a more crafting-resource-forward approach to the overworld, this game fuses the two surprisingly closely. The monsters here are built from the land itself, which creates a sense of cohesion that many in the genre lack.

There’s an awful lot to take in here – the tutorial is a bit on the wordy side – but that suggests that the full game could stand up to dozens of hours of exploration. If survival games are more your speed, this just might be a critter-catching game up your alley.
– Data_Error

Yah, I’m looking forward to this one.

I played the demo for about an hour and a half from start to finish, and thoroughly enjoyed it. Think Stardew Valley but in the stone age: farming, relationships, little quests, and some mysterious little totem creatures who live in a cave and want you to do some challenges for them. It’s really cute and fun. I actually appreciate that there are things like trying to invent a sundial and fishing with a sharp rock. This game is definitely going on my wishlist to await the full release.
-Elinzia