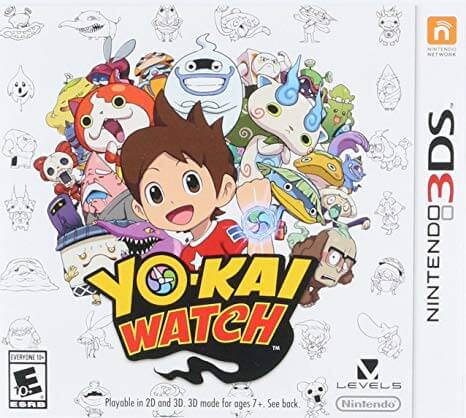 by Austin King | The Geekery

Yo-Kai Watch is a series you’ve probably heard of but maybe never played. You might know it as “that Pokemon-type game that Level-5 makes,” or maybe even “Shin Megami Tensei’s charming kid brother,” as Polygon’s Allegra Frank once called it. You’ve probably at least seen Whisper, the ghost, or Jibanyan, the cat spirit, in ads or along the toy aisle. It’s a show that plays regularly on DisneyXD, and kids went insane for the original theme song about three years ago.

Yo-kai are spirits in Japanese folklore, and the game mostly stays true to its folkloric origins. For instance, both folkloric and in-game yo-kai have different personalities and can cause good or bad things to happen. They often resemble animals, play tricks, and can shape-shift.

Although it was never as popular in the States, Yo-Kai Watch was once more popular than Pokemon in Japan. Although its popularity has declined in recent years (mostly due to the release of Pokemon Go, which renewed interest in that 20+ year-old franchise). You can read all about that here, if you want, but I’m not really here to discuss the rise and fall of two video game franchises. I just want to tell you how awesome Yo-Kai Watch is, and why I think more people should play it.

If you’re interested in how the gameplay and story of Yo-Kai Watch compares to Pokemon, though, we’ll get to that in a bit.

If you have already played Yo-Kai Watch for the Nintendo 3DS, then great! You’ll know exactly what I’m talking about when I say it’s a fun, hyper self-aware, humorous JRPG that feels both unique and like almost every other Level-5 game out there (like, Ni No Kuni and Rogue Galaxy, to name two).

Those familiar with Level-5 games will recognize some of the gameplay and themes in Yo-Kai Watch almost immediately. There’s a bug catching mini-game, like in Rogue Galaxy. There’s a fishing mini-game like in Dark Cloud. There’s tons of side quests, divided up into Requests (longer side quests) and Favors (short ones that you can repeat). If you’ve played Ni No Kuni 2, which came out three years after Yo-Kai Watch, then it’s exactly like the Side Quests/Errands system in NNK2.

The yo-kai even resemble some of the familiars from the first Ni No Kuni, and some of them fight like it, too. All of this is to say: if you like Level-5 games, then you’ll like Yo-Kai Watch.

Addressing the Elephant (Donphan?) in the Room

Bad jokes aside, if you haven’t played this series before, it probably seems a lot like Pokemon. Let’s get this out of the way quickly: it’s like Pokemon in that you befriend creatures to fight for you. The similarities pretty much stop there.

The catching mechanic for Yo-Kai Watch is complicated. You don’t really “catch” them at all, you see. Instead, you “befriend” them.

There’s two ways to encounter yo-kai: you either run into them inside alleyways and caves (what passes for the game’s dungeons) and do battle, or your watch lets you know one is nearby. The latter method involves a couple of extra steps. You must use your watch to scan the area, lock-on to the yo-kai as they attempt to run away, and then battle them if you successfully lock-on to them.

But it doesn’t end there! You can’t just fight a yo-kai and hope to befriend them. You have to get them to like you to increase your chances of a successful befriending. You do this by feeding them various foods. Even after you find a food that’s a yo-kai’s favorite, there’s food ranks to worry about. And even after that, you still might not (probably won’t) befriend the yo-kai.

My main–perhaps my only–frustration with the game is that yo-kai aren’t easy to befriend. You go through a lot just for a chance to make them like you and join your party. Even when I did EVERYTHING exactly right, I think I befriended the yo-kai only about 25% of the time.

If that sounds like too much work, then this maybe isn’t the game for you. For me, it was frustrating, but the rest of the game was so fun I quickly learned to deal with it.

The gameplay mechanics are way different from Pokemon, too. Pokemon games can basically all be summed up like this: You’re a trainer, you get a starter Pokemon, you set out on a journey to fight gym leaders and attain badges, and along the way you try to catch all the Pokemon you can. It’s usually fairly linear and often grindy, since when you’re not fighting wild Pokemon you’re fighting other trainers’ Pokemon.

Yo-kai has a very different way to play. First, the story is divided up into eleven (often short) chapters. You can pretty much freely roam around the giant metropolis where you live and the surrounding woods, explore the sewer systems, check out buildings, and do side quests to level up your yo-kai and get cool items. That’s it.

It’s a fairly open game, where you’re free to mostly choose how you want to play. You can spend hours catching bugs or fishing, wander around the city and try to befriend yo-kai, or just play through the story.

There are only a few lockouts in the game, and most are story related. Adding fast travel through the yo-kai Mirapo later in the game is super nice, too.

And since your character is one of the few humans who can see yo-kai, there are no “trainers” to battle. The fights you get into are with other yo-kai, either in the game’s dungeons or in the wild.

The bosses in Yo-Kai Watch are plenty of fun. Most have a unique battle mechanic you can use to make the fight go smoother. And while you cannot befriend boss yo-kai the way you can catch boss Pokemon like Mewtwo, there’s plenty of legendary (or Rank-S, as they’re called in the game) yo-kai to befriend in the postgame, if you’re looking for a challenge.

Down and Out in Springdale

The sprawling metropolis of Springdale is where almost all of the game takes place. There’s lots to do here. Early in the game, you have to sprint almost everywhere you go. Thankfully, you get a bike about halfway through the story as more areas become available. Late in the story, you can even fast travel by activating a mirror-like spirit named Mirapo.

Yo-Kai Watch is also a super self-aware game. Often times, it just straight-up breaks the fourth wall. Other times, the main character or his trusty yo-kai sidekick Whisper says exactly what the player is thinking.

I found myself laughing quite a bit at the game. Some of the jokes are hit or miss, but that’s probably because of its appeal to a younger audience, too. Side note: I tried to watch the animated series, which is on Netflix, and I just didn’t like it. My daughter, who’s almost three, won’t stop singing the theme song now, though. To be fair, the song is super catchy–and it’s one of the few popular songs I can think of that mentions “taters in Idaho” and a reference to diarrhea all within a couple of lines.

The main story of Yo-Kai Watch is short. If you just concentrate on getting through the story, you could probably beat it within twelve hours. If you do some of the side quests and hunt for yo-kai like I did, then it may take longer. I finished up the main story in less than 18 hours.

There is, however, an immense amount of postgame content. Most of the S-Rank yo-kai aren’t even available until after you beat the main story, and several locations are locked until then. For instance, I recently completed the four quests needed to get Kyubi, which included runs through new dungeon-like areas and fighting powerful enemies for RNG drops.

I logged many hours in the postgame and am still going back to it occasionally to catch new yo-kai and explore new areas. A few days ago, I finished up the postgame gauntlet, the Infinite Inferno. I won’t be surprised if I spend more hours here than I did getting through the main story. I doubt I’ll get all the yo-kai. There are, after all, almost 250 in this first game, and befriending them can sometimes be a chore.

Overall, I’ve enjoyed my time in Springdale with Whisper and all the other yo-kai I befriended along the way. I think it’s a series that deserves more recognition in the States, and I think that it will continue to step out from Pokemon’s shadow the longer it’s around.

If you haven’t played Yo-Kai Watch before, now is a great time. It’s currently around $15 on Amazon and other sites, and well worth the money. With the fourth installment of the series coming to Japan this summer (and hopefully stateside soon after), I’m hoping to play through the other games while taking breaks from my Dragon Quest quest.