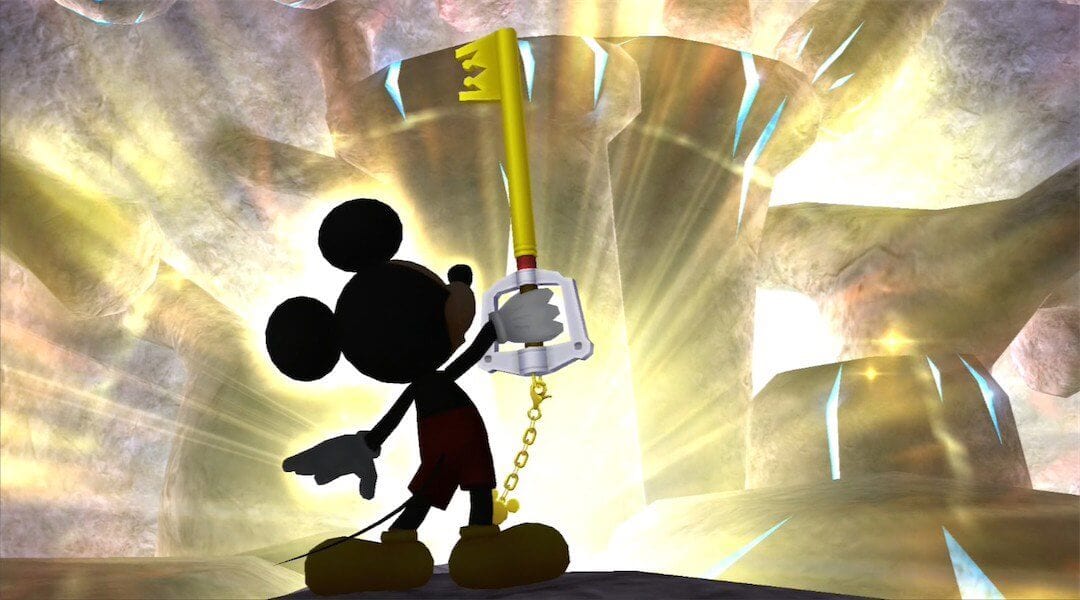 Obviously, there are spoilers for Kingdom Hearts 3 and its ending(s) ahead. You’ve been warned. Read on at your own risk.

When I saw the first ending, I actually got emotional. The story in KH is pretty much incomprehensible, but at the same time, I am invested in a lot of these characters. So to see friendships rekindled and happiness found, I honestly teared up a little. (Shut up, so did you.)

But you know what made me saddest of all?

And at the very end, Sora wasn’t there.

Even though I’m not a big fan of Sora’s because of his wishy-washy childishness, he deserved to end up with Kairi and be with his friends. He earned it at this point. The boy’s been through a lot.

And you know what? More than that, Kairi deserved to be with him. She’s been through all this, too, and constantly victimized even more than Sora. And when she finally gets a chance to use her Keyblade and training…well…let’s just say there are some fridging issues there.

Regardless, she’s alone and Sora’s gone.

I mean, Mickey told him that if he went after Kairi that he’d lose himself. And while I personally thought that meant a fall to darkness, it wasn’t. It was apparently his death so that Kairi could live.

So…I had high hopes for the secret ending (which you can unlock in Kingdom Hearts 3 by finding all the Lucky Emblems (Hidden Mickeys) on Easy mode, 60 of them on Standard, and 30 on Proud.

I was on Standard, and I finally got to see the secret ending today.

The One, True King

Okay, so probably my favorite part of the entire game was the trailer for Verum Rex before you head into the Toy Box, the Toy Story world. In it, we see a Noctis/Riku-looking guy fight giant robots alongside a motley assortment of compatriots who look like a mish-mash of Lunafreya, Ardyn, Gladio, and Ignis (all of whom are from Final Fantasy XV).

But if you know much about Nomura (the director of Kingdom Hearts 3), you’d know he was also the former lead on Final Fantasy Versus XIII, and that game spent a decade in development hell and eventually changed hands over to Tabata to become Final Fantasy XV.

Lots of rumors persist that Nomura is pretty salty about that loss, and we kind of get a taste at that through Verum Rex because this game…this game is a loveletter to Versus XIII.

I didn’t know a lot about it before, but there are tons of videos on YouTube about it. This is the first one I saw:

Basically, the whole Verum Rex thing is Tetsuya Nomura showing what cool stuff he could have done if he’d been able to finish Versus XIII.

So what does this have to do with the Kingdom Hearts 3 secret ending? Well, a lot. Because apparently, Riku and Sora are kind of…in Verum Rex after everything was said and done.

Or at least Riku is. Even though he was at the party on the Destiny Islands, Riku is now somehow in the Tokyo-like city that the Verum Rex trailer showed.

And Sora is…somewhere else. He wakes up, so we know that the dude was knocked out and sent somewhere. And from the look of it, he’s in a Tokyo-esque city, too. Only this one might actually be Tokyo because the 104 building alludes to his being in the same world as The World Ends With You, which makes sense because those guys were both in Kingdom Hearts Dream Drop Distance and they’re involved in something called the Reaper’s Game in their title. Sooooo yeah. Sora’s dead and in purgatory-ish?

Regardless, the Noctis/Riku guy (whose name is actually Yozora) is watching Riku. What that means is that Verum Rex is obviously somehow a real place within the Kingdom Hearts multiverse.

And that means there’s a chance we can see it as either DLC or an upcoming installment.

If Nomura won’t let Versus XIII go, and he has ideas and assets and stories he wants to tell, why not just include them in his flagship series at this point?

And you know what? I am 100% okay with that. Because I had kind of hoped that Verum Rex would be a SE release on its own (because giant robots), I am more than okay with Sora and Riku heading in there to clash (and that’s what it looks like is going to go down) with Yozora and crew.

Where Do We Go From Here?

Well, it sure looks like we go to Tokyo in The World Ends with You and Verum Rex, dunnit?

Whether it’s DLC for KH3 or a sequel, we know that Nomura isn’t letting go of Versus XIII, and that we are going to get a lot more to do with Yozora and his friends in the coming…time.

But best of all, most of all, most important of all…Sora’s not gone. I may not like the little wiener, but I can’t help but want him to make it through all this and get some semblance of happiness.

He’s a good kid. He deserves that. So does Kairi. And so does Riku.

So I can’t wait to see what’s up with Versus XIII…I mean Verum Rex…I mean, Kingdom Hearts Next? I don’t know.

I’m just glad the story’s not over despite having , and that we have an inkling of what’s coming. And it’s awesome.

What did you think about Kingdom Hearts 3 and its ending/secret ending?