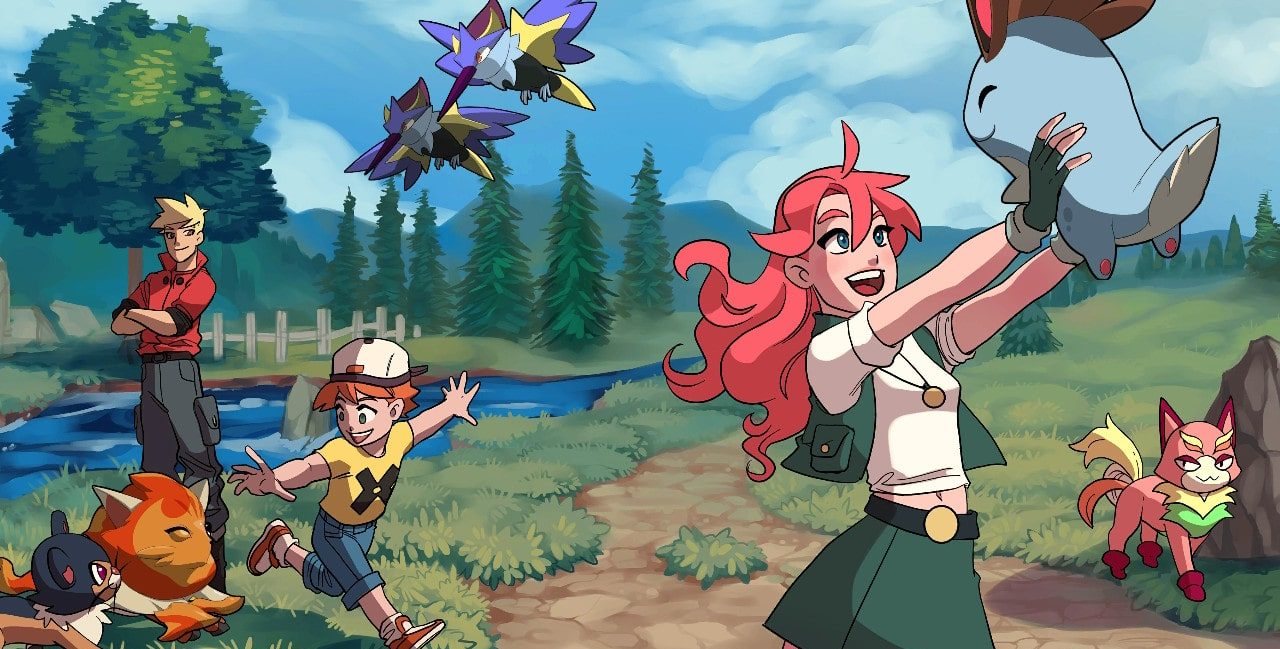 Nexomon isn’t even remotely trying to hide what it is: another direct competitor to the mind-meltingly massive franchise that is Pokémon.

Normally, I’d try to dance around that even a little, but even the team at VEWO seems to gleefully invite the comparison. Its style and format is clearly mimicking the old, 2D titles almost one-to-one. You can’t get out of the first town without non-player characters poking fun at the differences between the two game series.

And yes: both are series. It’s rare enough that one game built on the success of a different IP should do well enough to warrant a full sequel. It’s even rarer that it should get a full sequel, with a real price point, on Nintendo’s own digital store.

So, it stands to reason that Nexomon: Extinction is earning its lunch one way or the other. And, to be honest, I’ve always been curious about the score of other games that try to fill Pikachu’s colossal shoes. But here’s the thing: I’m a little bit invested in the Pokémon franchise, in case my many articles here and more elsewhere didn’t give that away. I feel like there’s a strong sense of what does and doesn’t work about them.

I’m less concerned about “is Nexomon a serviceable video game?”

The more interesting question is: how does Nexomon: Extinction stack up, and how does it differentiate itself?

So let’s start with the same yardstick I used against the last actual Pokémon release:

In short, when I play a Pokémon game, I hope it will be fun to:

Obviously, this is greatly over-simplifying things, but it’s a fine starting point for seeing how much fun the monster-taming is in a monster-taming adventure.

And, right off the top, Nexomon: Exctinction is doing pretty well.

The core Pokémon video games (which I’ll just shorthand as “Pokémon” from here on out, because that’s the only part of the franchise that matters here) has been going for the same song-and-dance for ages. You whittle down the monster’s HP, throw a status effect on, and start chucking capture balls. Some Pokéballs are situational, but otherwise that’s mostly your lot.

Nexomon brings in another element: bait. You carry around different snacks with you, ranging from apples to flan to tacos, and feed them to the wild creatures to win them over to your side. Pokémon has done this a little in the past with the Safari Zone, but that’s always been obtuse and un-fun. No wonder it’s been phased out of the series entirely. Here, bait is a more active part of the routine. You feel more like you’re luring and trapping a wild animal rather than just cornering it and beating it down.

But the capture process in Nexomon: Extinction also brings in every game-player’s dreaded foe:

…which honestly aren’t quite so bad as they sound. Remember the playground rumor that holding “B” while your Pokéball shook would raise your chance of a successful catch? (If you don’t, trust me – everybody in third grade totally believed it.)

Or, rather, each catch asks you to hit a random button sequence to better your odds. It’s pretty easy – I’ve failed zero percent of the time so far – but it still helps me feel a little more involved than leaving things to a dice-roll. That was the part of the playground rumor that intrigued us, anyway, right?

The game slowly raises your odds over time, too. Pokémon does something similar with “critical captures”, but increasing your overall capture chance as an explicit quest reward does feel gratifying in its way. Some things are still simplified, like having fewer and less-interesting situational Nexomon traps than there are Pokéballs, but I’m hardly about to ding a smaller developer for lack of scope. How can I when there are still nearly four hundred of the buggers?

Ultimately, catching Nexomon just feels good, and there’s a lot of that to do, so that gets a big green check-mark from me.

I wish I was as keen on raising them.

The obvious drawback to having so darned many monsters roaming around is that they start to blend together, even when they’re all colorful and surreal. Pokémon has gotten around this in increasingly inventive ways over the years, from combining different elemental types and assigning most monsters a gender to hidden statistics and short blurbs describing their personality.

Unfortunately, the monsters in Nexomon Extinction feel largely interchangeable. Each monster has only one elemental “type”, which certainly simplifies things – seven possible matchups are way easier to consider than eighteen that can all be stacked against one another. But the reverse side of that is that the creative space to play in is so much smaller.

It’s hard to get excited about a new, chunky mineral monster when I already have one that I know will do the same job in the exact same way.

It doesn’t help that two specimens of a given species are objectively identical. By and large, they can only be made unique by assigning nicknames and equipment, both of which you can revoke on a dime. That deep lack of individuality made me treat these critters with a very easy-come-easy-go attitude.

And once they’re out of the party, they’ll almost certainly stay on the bench forever. Both random and structured encounters will scale to your current level, which makes playing catch-up with old friends just impractical. What aggravates this is that experience isn’t calculated until after a complete encounter, so a runt who gets knocked out late in a 4-v-4 match gets no experience at all, and falls further behind. You’re honestly better off catching some new schmuck and leaving your old friend to rot in storage forever.

So is the battle system fun, then?

I mean, it’s hard to be too negative when it’s clearly not fixing things that weren’t broken:

There are definitely some changes here. For one, every move shares the same stamina bar, so you can’t just steamroll everything with an ace-in-the-hole. You have to ease up on the throttle sometimes and swap new party members in, especially since you can’t out-level most enemies. The team feels more like a team by necessity, and in most cases that’s arguably for the better.

But because your whole team has a hand on the ball, it can be more tedious to play. Everybody gets tired at the same rate, encouraging you to burn through healing items or trek back to town. And even random-encounter enemies come at you with wide teams that swap in and out to cover many types early on.

It’s fairer to the computer-controlled enemies, and it certainly pushed me to engage more with even routine matches. But it also felt like my progress was much slower compared to similar RPGs, even if encounters are clearly avoidable in the overworld.

For two, each battle feels like much more of a numbers game. This is true in any turn-based RPG, of course, but Nexomon is keen on making it obvious. Stats and percentages define each move, and are made eagerly transparent – as are they on the “Capture Chance Breakdown” readout. There are just so many digits on-screen at any time. Again, it’s clearer. It’s fairer. I’ve ultimately found that I appreciate that after finally seeing damage numbers in Monster Hunter after a decade.

But it also feels very busy compared to Pokémon‘s more abstract – but, in their way, consistent – battles. There are still as many numbers under the hood, but seeing more of them up-front makes each turn more to think about. And that sure adds up over time. And all this is just against a computer player – Nexomon doesn’t even touch how this applies to player-vs-player encounters (where, to be fair, those readouts would likely be more valuable).

…but that brings me back to a real knife in the back that keeps Nexomon: Extinction from hitting the notes I was hoping for:

One of the joys of Pokémon is how it embraces its nature as a wide-eyed, all-ages series. Everybody is upbeat and enthusiastic and all-too-ready to tell you about how they go shopping with their Wooper every morning.

Nexomon is just a little more serious than Pokémon. Nobody makes bones about the human-servant relationship they have with the world’s monsters, and the plot is less “backyard adventure” than “stock JRPG story”. That could be an upgrade for some players who are weary of sugary, technicolor monster outings.

But Nexomon also wants for the player to be very clear that it’s in the next age bracket up.

And that, apparently, translates to a lot of self-referential “humor”.

This results in an early situation where a character says, word for word, “I know you’re trying to skip this tutorial, so let’s get it over with.”

The game acknowledges what it is, and rather than trying to do better (like, for example, offering to actually skip ahead), decides that it’s enough to just sit back with a self-satisfied grin.

It felt like neither the game nor I wanted to be there.

Not a great feeling to have in the first half-hour.

I’m twenty hours in, and it hasn’t let up. I can hardly have three consecutive interactions without a side-character butting in and “cleverly” commenting on how a situation is illogical, or frustrating, or cheesy. It basically makes the game impossible to get invested in as anything more than a quick-hit dose of RPG.

Nexomon is simultaneously trying to be and also make fun of a fun JRPG series, and that combination combined with some specific writing choices results in something that often just feels ashamed of itself.

Is Nexomon a Suitable Pokémon Substitute?

If you’re looking for something that has the same mechanics to tide you over? Sure. Nexomon: Extinction goes through a lot of the same motions. It tweaks things for clarity, whether or not you wanted that.

If you feel like you’ve grown beyond Pokémon, its sense of humor may strike you as a fun subversion. It knows what it is, and it’s perfectly happy undercutting itself in service of a wink and a nod. It makes for a fun change of pace in small doses.

Nexomon even feels like a practical test-bed for new directions for the formula. Having greater freedom of exploration feels great after it’s been dialed back in blockbuster releases. Adding more moving parts can re-invigorate some parts of the gameplay.

But if you’re looking for an adventure that keeps the same spirit and sense of wide-eyed wonder? Nexomon doesn’t even attempt that most of the time.

Taste is subjective – I can’t objectively criticize how Nexomon’s monster design or tone land for everyone. Even its sense of humor could be up to preference. But it’s no more a wholesale substitute for Pokémon for me than store-brand cereal is for the household names. It can sure fill the same place at breakfast, but it’s hard not to notice what can sound little differences.

You just have to decide which of those matter to you.

As for me: I’m still playing Nexomon.

I’ve just adjusted my expectations. Not down, or for the worse; just elsewhere.