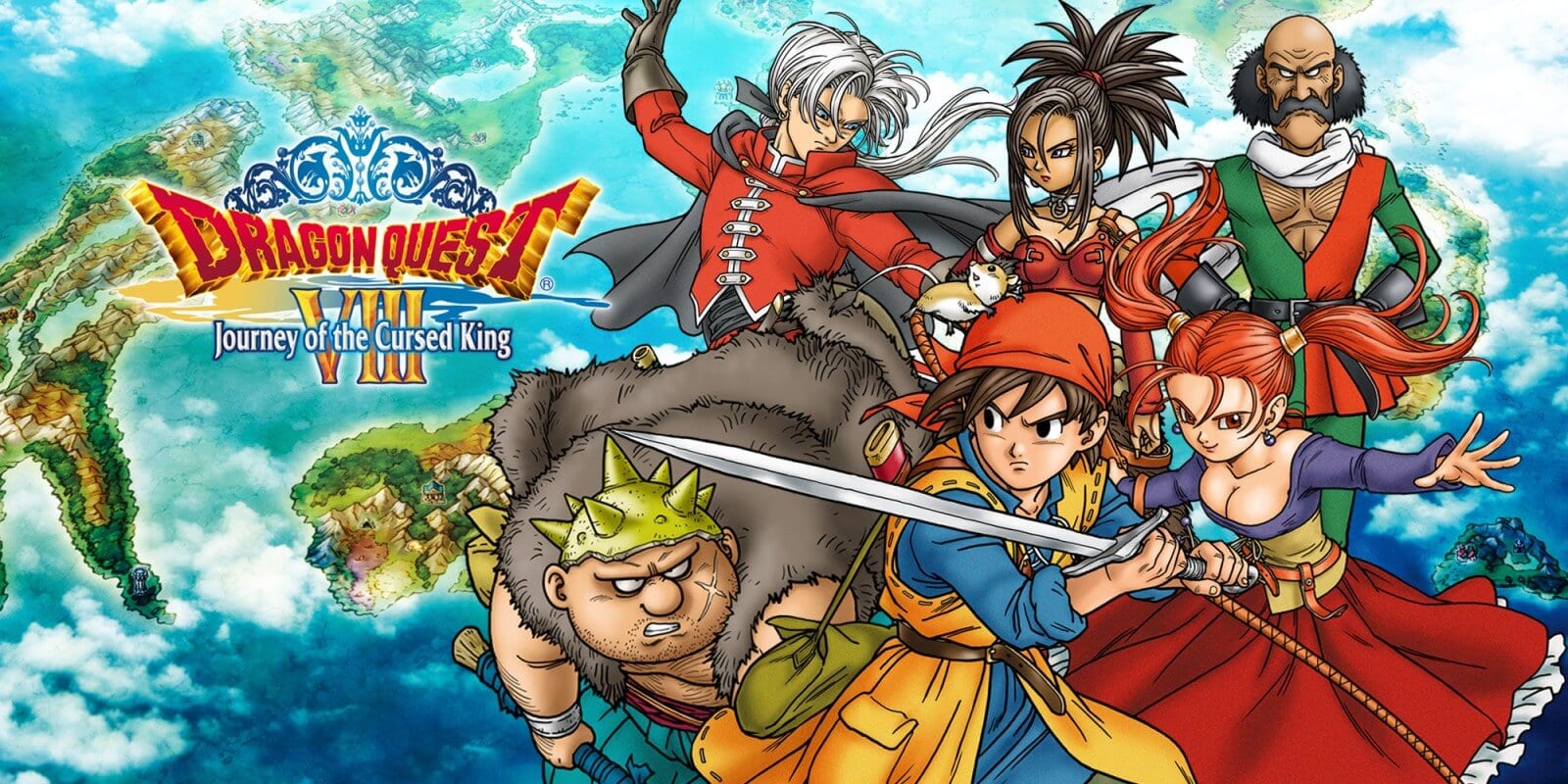 This week, we’ve finally reached Dragon Quest VIII! It’s the next-to-last main entry game I have left to play. I’ll admit, I’ve taken it much slower with this game for a number of reasons.

(1) I’m almost to the end of playing all the mainline DQ games this year, and I’m taking is slow now because I’m getting sad about running out of great games to play.

(2) I don’t think I like DQ VIII as much as most people, and maybe not even as much as I should. It’s still a good game. But while most people would rank it toward the top of their list, I’d put it somewhere closer to the middle.

(3) I got super distracted with Dragon Quest Builders 2 during my play- through of VIII. Btw, Builders 2 is amazing! But if you read this blog or listen to my podcast, you know that already!

For this week’s post, I wanted to focus on the cast of characters. The characters are one of the game’s biggest strengths. By the way, I played the 3DS version, which has several changes from the PS2 version. Let’s jump right in, shall we?

A Princess and a Toad–I Mean Trode!

The game starts of in medias res. So we’re thrown straight into the narrative without any real introduction. It’s a bit unsettling, since you are quickly shown several main characters and a teensy bit of plot.

Our hero is a guard at the king’s castle in Trodain. The castle itself is surrounded by thorns (you may get some Sleeping Beauty vibes here); the king, Trode, has been turned into a little troll-like/toad-like creature; the princess Medea has been turned into a horse; and there’s a bandit named Yangus hanging around and calling you “Gov.”

Almost instantly, you get to fight monsters and reach your first town, Farebury. Like most DQ games, Farebury has its own subplot, unique NPCs, and a couple memorable characters. It also ties somewhat loosely into the bigger narrative, since your party is hunting for a jester/sorcerer named Dhoulmagus.

For me, I played the beginning parts of DQ VIII because I had to. The story doesn’t really pick up until after Jessica and Angelo join the party. Thankfully, that’s not too far into the game. And I still think the beginning of the game is a little awkward and uneven.

One thing Dragon Quest VIII has going for it: the cast of characters. Our hero is pretty interesting for a nameless guard, Trode is some nice comic relief (and I love the way he runs). Countless times, Trode sneaks up on Yangus, prompting a scared reaction and a cry of “Cor Blimey!” It’s funny, but it also gets old.

Yangus has a bit of interesting backstory, and I’m glad this game delves into the pasts of our other characters. We learn why Yangus joined the crew in the first place and bit about his mysterious bandit days.

Jessica’s story is pretty good, too. From a family tragedy when you first meet up to a subplot involving “Evil Jessica,” she’s always got something going on. She’s also the only character who gets outfit changes, which is pretty much just there to go along with her sex symbol vibe and absurdly large boobs.

I didn’t like Angelo in Dragon Quest Heroes 2, which I played before this game. However, he’s one of my favorite characters in VIII. I’ve enjoyed his story a lot, even from the get-go. The subplot between him and his half brother Marcello is interesting, and I especially like how his and Marcello’s stories affect the bigger plot of the game.

You get Red through the story. She’s a fine character within the narrative, but her magic isn’t as good as Jessica’s or Angelo’s, and her attacks aren’t as strong as the Hero’s or Yangus’s.

Morrie is a fun character. I like him a lot. He’s a silly predecessor to Sylvando (personally, my favorite character from DQ XI). You unlock him by fighting your way through the ranks at the Monster Arena. I was able to get Morrie about 25 hours into the main story. Like Red’s, I don’t like Morrie’s fighting style as much as the four original members’, so I haven’t played with him very much.

A Bunch of Villains!

This post is getting a bit long, but I want to talk about the villain for a moment. Early in the game, you’re pursuing a jester/sorcerer named Dhoulmagus. He’s a good villain, even if he feels like a total ripoff of Final Fantasy VI‘s Kefka. But wait! There’s a twist!

Turns out, Dhoulmagus isn’t the real villain. Once you defeat him about halfway through the game, you learn or Rhapthorne, the true source of evil. Rhapthorne goes around possessing people via a magic staff. Once Dhoulmagus is defeated, Jessica picks up the staff. Thus, Evil Jessica!

A bit later, a dog named Sir Leopold picks up the staff, and then you have to go around the world, chasing after a possessed pooch. It’s absurd, sure. But it’s also one of my favorite parts of the game.

This post mostly concerned the characters in Dragon Quest VIII. Next week, I’d like to talk about more of the gameplay mechanics: the lack of a job system, the alchemy pot, the skill point system, and so on.

In the meantime, keep playing Dragon Quest! I know I will be.