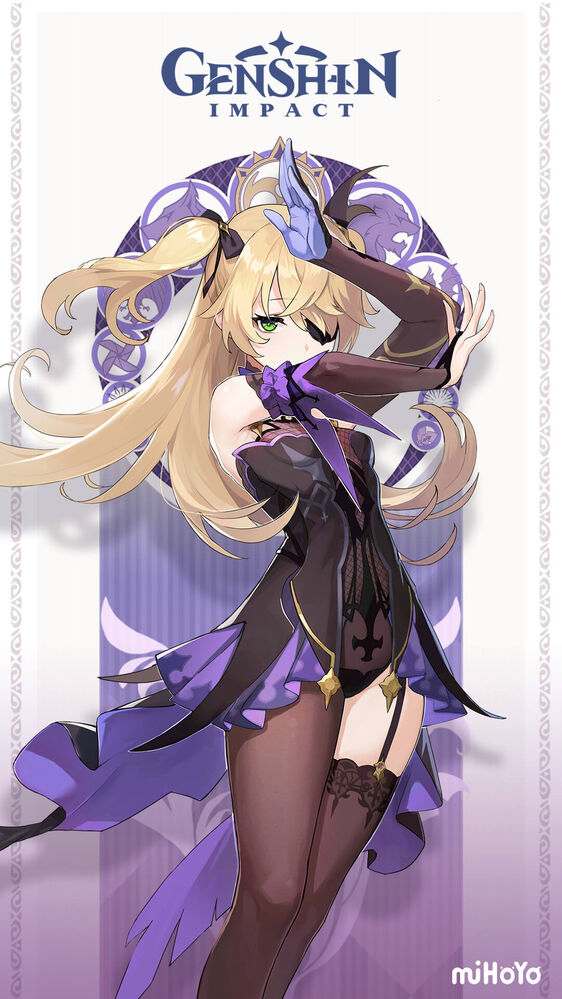 In our last Genshin Impact article, we shined a spotlight on the alluring Lisa, an introductory (and free!) Electro-element character who can help you reach Adventure Rank 15. But what about after that? While Lisa is a perfectly acceptable Electro user at any point in the game, you might want to try your luck at the game’s gacha system to earn a slightly more advanced character. If you’re lucky (or if you completed the Unreconciled Stars event in November), you just might earn a four-star character named Fischl who will take you on the next step of your journey toward mastering Electro.

Fischl is an investigator for the Adventurer’s Guild of Monstadt who is as powerful as she is mysterious. Little is known of how Fischl arrived in Monstadt, but once upon her time she was a normal girl named Amy who was obsessed with fantasy novels. After receiving a Vision from the gods, a power was awakened within Amy, who wasted no time renaming herself after her favorite literary character, Fischl, the “Prinzessin der Verurteilung.” Fischl now explores the world of Teyvat alongside a magical raven named Ozvaldo von Hrafnavines, or “Oz” for short, who was summoned from her subconscious.

Fischl’s asymmetrical outfit complements her eccentric personality, with her “twintails” belying her impressive powers. She wears a patch over her left eye. This she claims contains power beyond comprehension, though this might just be an aspect of her role-playing. Fischl is also quite keen on the German language, though mispronunciations abound between her and Oz, who pronounces “mein” like the English word “main.” Wie peinlich!

Despite being limited to the use of one eye, Fischl is a talented archer. Her primary abilities consist of a 5-hit combo attack and a charged shot infused with the Electro element. The latter ability allows Fischl to zoom in for critical hits, making her an excellent sniper. Especially when an enemy is surrounded by water. Whether at close or long range, Fischl is a versatile force to be reckoned with. She is especially useful against Eye of the Storm enemies.

Fischl’s elemental skill, Nightrider, allows her to summon Oz for a short while. The mystical raven can be placed in a chosen spot. Here he will fire continuous beams of electricity at nearby enemies. Her elemental burst, Midnight Phantasmagoria, continues with the avian trend. When charged, it allows her to transform into Oz for several seconds to fly about and discharge powerful Electro blasts. After reverting to her human form, Oz will remain for the full duration of his Nightrider attack.

While Fischl’s abilities allow her to perform effectively as either support or a primary damage-dealer, arming her with an Elemental-boosting bow will help either way. Artifacts with the “Thundering Fury” ability will also boost her Electro effectiveness specifically. Fully equipped with Elemental-boosting items, Fischl can summon Oz before switching to another character. Such as swap in a Hydro character for maximum synergy. This allows her to be a devastating presence even while resting.

Is Fischl an integral member of your Traveler’s party? Who do you like to pair her with? Let us know in the comments. Don’t forget to check out our Genshin Impact Beginner’s Guide and FAQ if you’re just getting started!