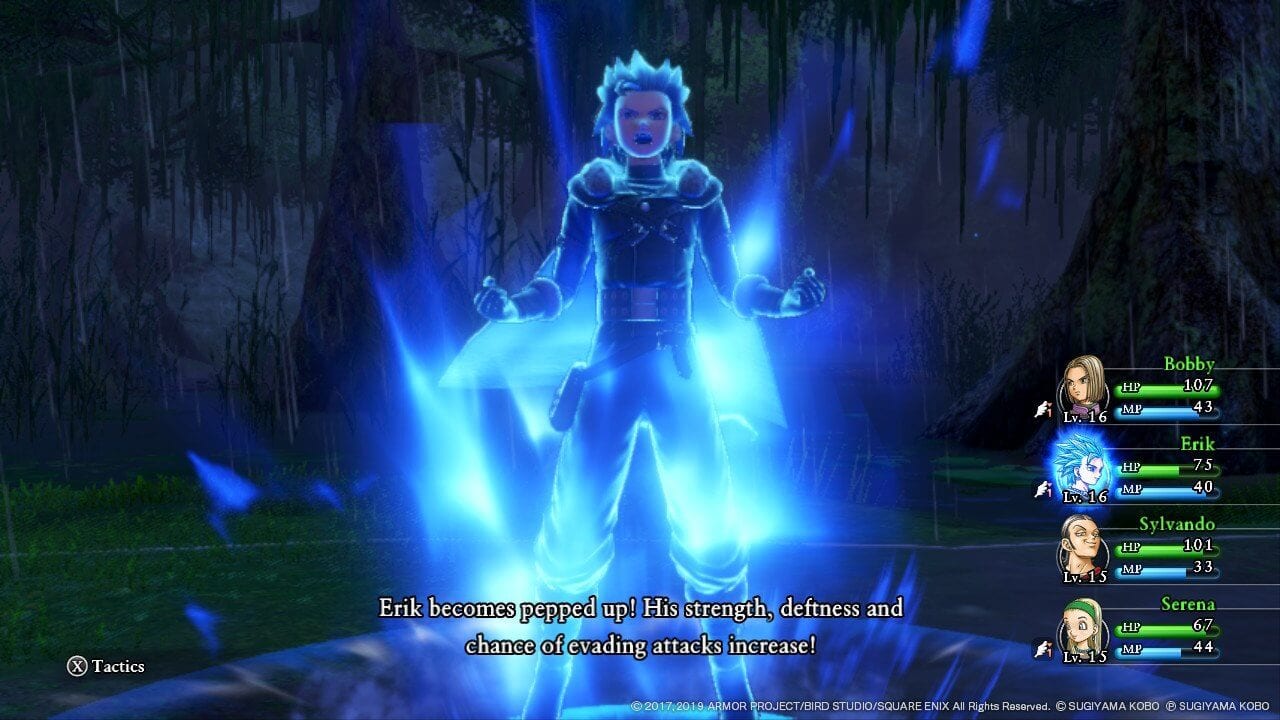 The power of pep propels you: hidden numbers and Dragon Quest XI

Dragon Quest XI’s battle system is deceptively simple. You take turns attacking or using abilities and the monsters you’re fighting do the same.

It’s about as old school as it gets. While other RPGs make big mechanical changes to make their systems more active or faster, or use bigger numbers to seem more impressive, DQXI offers the addition of pep.

Pep is like limit break or any system where characters fill up a meter to enter a more powerful state with stronger attack options. Some attack options involve having multiple party members pepped up at the same time and expending all their pep powers simultaneously.

However there’s one big difference between pep and other limit break systems:

You don’t know anything about pep! For a game whose systems are so easy to follow due to the small numbers they use, pep charges completely in the background. There’s no visible meter, no indication of what might cause a character to activate pep and no way of knowing how close you are.

The only other hidden number that I’ve encounter in my 15 or so hours playing Dragon Quest XI is enemy HP, which you’re at least given the change in color to their name. And again, the small numbers make it very easy to figure out the range of most non-boss enemies’ HP.

So pep being so hidden becomes this intricate puzzle that gives the player a few meta-strategy choices: incorporate it into your strategy or not, try to figure it out or not, and of course what to do with it when you get it.

For some players, pep almost turns into a research project, charting out variables and instances. They can use the skill trees to adjust a few levers on the frequency of which pep activates, which may or may not help them crack the pattern.

In fact, Googling around doesn’t show anyone that’s actually cracked the code yet, although there are interesting theories. I’m not going to repeat those here, but a lot of them have to do what events trigger pep and what events cause pep to become more likely.

Pepping up your quest

So what I really love about this is that it gives you this crunchy puzzle to work on during the length of the game. Obviously the game’s systems aren’t going to be super challenging, but pep provides a veiled mystery that players can work on through out the game.

Pep is also a system that doesn’t discriminate. It’s nothing but an advantage to new and young players who may not be drawn to it’s hidden complexity. While it gives long-time players and Dragon Quest veterans something extra to chew on.

Upcoming on this blog:

Right now I’m on my second play through of Fire Emblem: Three Houses and I want to give my thoughts on the story at some point although that might not be next week. I’m also continuing to play Dragon Quest XI and I’ve picked up a couple older indie games: Neon Drive and Bastion that I may or may not have something to discuss there.