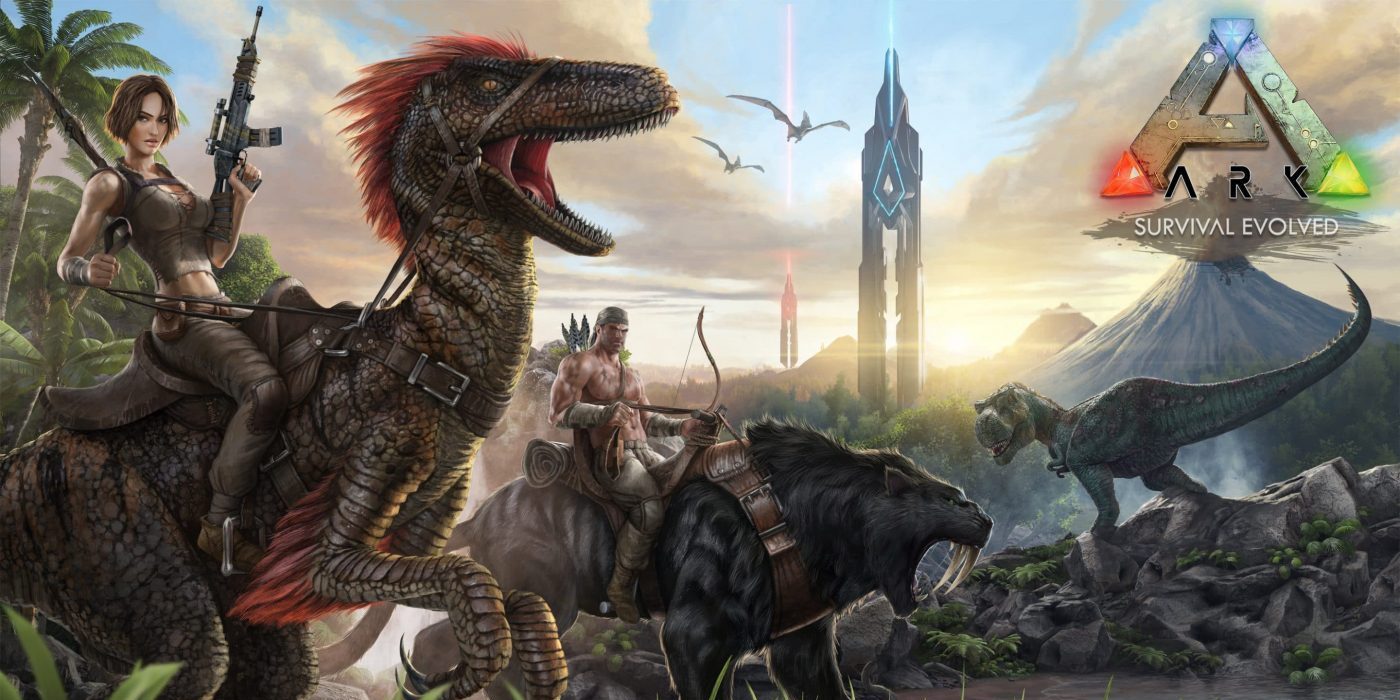 How to Get Started with ARK: Survival Evolved

A few months ago my online gaming group got deep into ARK: Survival Evolved. An open world, survival, crafting game that let’s the players fight, tame and ride dinosaurs. It went into full release four years ago so, in video game terms, it’s basically as old as the dinosaurs it features. But it’s pretty popular still and we found several Game Server Hosts that still supported it. We got a private server setup and got to playing.

You get eaten a lot at the beginning.

In proud crafting game tradition you can go punch a tree with your bare hands. It hurts you but you can start to gather resources that way. You can also gather stones from the ground and berries from the tall grass. Eventually you get enough raw materials to craft some pants. That way when a dinosaur attacks you you’ll be able to poop your pants. Your characters literally do poop in this game, so do all the dinosaurs. It’s valuable as fertilizer if you live long enough to start farming.

You eventually craft a full set of clothes and maybe a small thatch building. You can make some sleeping bags and a cooking fire and generally start to be warm and safe and comfy at home. And now when a dinosaur attacks you just run into your thatch house and close the door. It will take a minute or two before the dinosaur destroys the walls and ceiling and then eats you. That’s times you can use to shop for easier games on Steam.

A while after that you can build a wood house. You can hide in there for upwards of ten minutes before a large dinosaur breaks your house and eats you. While you hide in your house waiting to die you can consider the story of the Three Little Pigs. And start planning to build your next house out of stone. This game isn’t a perfect Three Little Pigs simulator because it doesn’t have brick houses. And instead of wolves you have dinosaurs. And the stone house can also be destroyed. To really be safe you need to build the metal tech house and surround it with automated defense lasers. Although I think that still follows the spirit of the Three Little Pigs story because, had the wolf broken down the brick house, a metal house surrounded by gun emplacements does seem like the next step logical step.

You can eventually progress to some really high tech stuff. Stone structures filled with forges and blacksmith stations, then modern metal buildings with electricity, refrigerators, and large restaurant sized cooking ovens. You can get running water piped into an indoor toilet too. Because without that your character has to continue pooping on the ground like an animal. And by the time you’ve invented electricity it just doesn’t make sense from a role-play perspective to crap on the floor of your house. When you’ve finally built a house dinosaurs won’t destroy you sorta want to keep it crap free.

What really sets ARK apart from other open world survival crafting games is clearly the dinosaurs. And they’re much more than enemies that attack and eat you. Eventually you can tame them and they become your loyal servants. You do this the same way you make friends with animals or people in real life, by drugging them and while they’re unconscious force feeding them their favorite foods.

Once you’ve tamed a dinosaur you can have it fight for you. So their first obvious use is to defend you from the hostile dinosaurs. While the hostile one kills and eats your pet dino you have lots of time to run home and hope you built a metal house. You can also ride your dinosaur if you have crafted a harness.

The best part of this game might be riding on the flying dinosaurs. Not only is it an incredibly useful way to move around the map without getting eaten it’s also awesome fun. And when you play multiplayer and a whole group of you all fly together in a flock it always reminds me of the Eagles transporting the Hobbit’s and Gandalf. In fact, if you tame a giant Dinosaur that looks a lot like an Eagle it can pick up and fly off with smaller dino’s in it’s talons. It’s pretty cool.

I could also explain how cool riding on a T-Rex is. But if I have to explain that to you then you and I are such different people that I doubt we could effectively communicate in the first place.

Some dinosaurs excel at harvesting wood, others rock, some are immune to poison, while others are faster. You start to collect a wide variety of different ones and using each one for whatever specific task they’re best at. At some point you don’t do anything by hand anymore, almost every task in the game is best performed by the correct dinosaur. And that’s when you really see what makes this game special. When you have a whole pen filled with different dinosaurs that you’ve individually tamed and go out and use or ride all the time you start to develop relationships with these mighty beasts. They’re your virtual pets, friends even. It’s awesome to be friends with a T-Rex.

We had a ton of fun building our base and filling it with dinosaurs we collected. Riding around in a pack of T-Rex’s. All riding together on the back of a giant Apatosaurus (AKA Brontosaurus). Or running into the caves which serve as Ark’s version of dungeons with our combat dinos. Eventually we defeated the final boss fight, where you discover that the whole game world is a virtual environment contained in an orbiting “Ark”. It’s pretty cool.

And now that we’ve discovered all the techs and built all the things and ridden on all the dinos and beaten the end boss we’re shutting down our server and moving on to other games. But I will always remember my time in ARK very fondly, it’s a truly great game. And, they’re making a sequel!