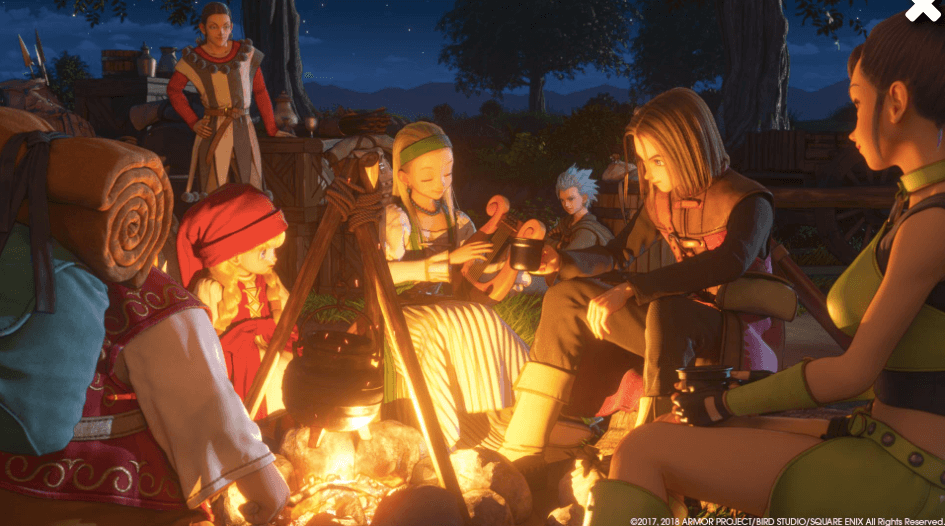 This week, I’m skipping ahead a bit to talk about the postgame (which is A LOT of game) in Dragon Quest XI, as well as some of the small gripes I had with an otherwise amazing entry in the series. Once again, I’m going to try to keep this as spoiler free as possible for one simple reason: if you haven’t played the game already, I really want you to. And I don’t want to spoil anything for you.

First, Why You Should Play the Postgame…

Unlike most games I’ve played, Dragon Quest XI has a ton of content packed into the game after the credits have rolled. It involves a mostly new villain, some new characters, and some of the trickiest dungeons in the game. But it also has a massive amount of new story content!

In fact, some of the secrets and revelations of the main quest aren’t even revealed until halfway through the postgame story! If that sounds frustrating to you, I understand. My brother-in-law quit after the credits because he thought it became too much of a grind. Personally, I never had that problem, but I also went overboard and had to finish every side quest and explore every nook and cranny of the world. In turn, that meant I gained a lot of levels just from messing around.

If you haven’t played the postgame yet, I beg you to. I can’t imagine having stopped the game at the credits. The postgame has some of the best reveals and character development in the entire game. After logging 60+ hours into a video game already, it might seem like a chore to add another 20 or so hours. I assure you, it’s well worth it. I promise. I even pinky promise, which my two-year-old will tell you is a sacred oath.

Sending Letters to the Complaints Department…

From earlier posts, you’ve probably deduced I loved Dragon Quest XI. I loved it so much, it inspired me to play the entire series in a single year and spend foolish amounts of money on buying cool trinkets and art books from the series.

SIDE NOTE: There’s an encyclopedia/art book over all the Dragon Quest monsters in the series, and I really want it. It’s in Japanese, and I can’t even read Japanese! But I still want it.

As much as I loved Dragon Quest XI, I can admit that it isn’t a perfect game. Personally, I don’t think any game is perfect. There are games that have been fantastic, awesome, and amazing. But not perfect. There’s always a flaw, even if it’s the teensiest little flaw.

So what were some flaws with DQ11?

My biggest complaint is probably the villain. Like all the other DQ games I’ve played so far, the villain is flat and boring.

(I’ll admit, the villain in the postgame is a bit more interesting after a few story-related surprises.)

Mostly, though, the villain is always some dark wizard or evil person hellbent on destroying the world. And the reason for this villain seems to be…well, these games need a bad guy.

I know I’ve compared this series a lot to Final Fantasy (it is, after all, another long-running JRPG series I’ve played a lot of), and what I feel like Dragon Quest really needs is a good villain on par with FFVII’s Sephiroth or FFVI‘s Kefka or (my personal favorite) FFIX‘s Kuja.

Having played five Dragon Quest games so far, I can assure you the villains so far have felt flat and boring. They are simply characters to defeat in order to beat the game.

I still have quite a few games in the series to go, and I hope I meet an interesting villain along the way.

My other biggest complaint involves the Skill Point system. The system itself is good. It’s not the system I have a problem with. It works like this: throughout the game, your characters will gain SP when they level up. SP can then be used to unlock abilities, increase stats, and give boosts to using certain weapons. Overall, it’s a really nice system that resembles skill point structures in countless other JRPGs.

BUT–and you knew there was going to be one, didn’t you?–several times in the game, due to story-related incidents or other stuff, you have to reset a character’s complete skill set. This means you can spend a lot of time unlocking the same skill–sometimes three or four times–just because it supposedly serves the story. It seemed mostly unnecessary, especially since you can reset your SP anytime you want at a cathedral for a small fee.

Other than the villain and having to reset skill points, my complaints with the game are few. I was irked a few times by drop rates or side quests, and in Nautica (you’ll know it when you get there), the mini-map is pretty much useless. But those were tiny things, and if drop rates and side quests were too easy, that’d take part of the fun out of it. Honestly, I don’t even know how to fix the mini-map issue in Nautica, but it was a very small part of a very big game.

My final complaint is with continuity in the story. Much of the game concerns time travel. For the most part, it works. There was, however, one continuity slip-up that still makes me rage with such Time-Travel Nerd Fury (TM) that I can’t even explain it without sounding insane. This particular gripe is also rife with spoilers, so I won’t talk about it here. Let’s just say…I didn’t like it and it makes no sense.

Like I said earlier, these are mostly small complaints. In a game as big as Dragon Quest XI, there were bound to be things I wouldn’t like. Amazingly, though, the list is extremely short.

So go out there and play Dragon Quest XI!