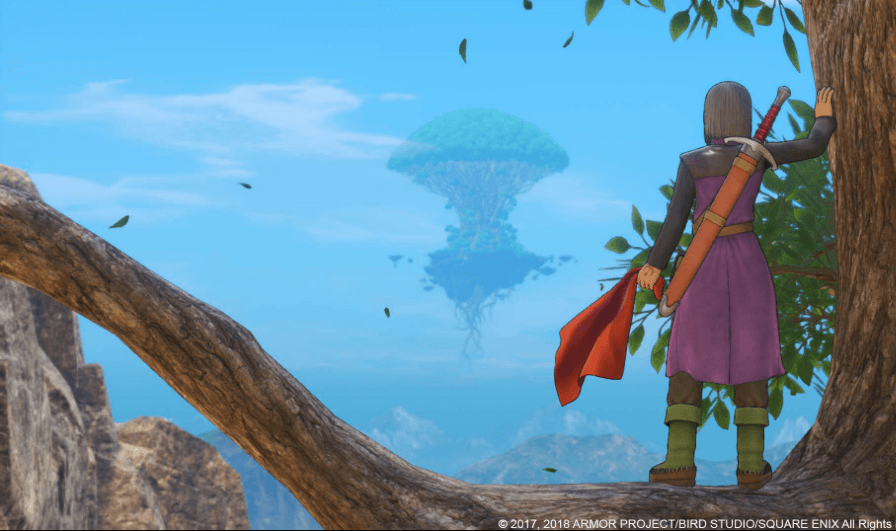 Dipping My Toes Into the Sweet, Sweet Waters of Dragon Quest

Before we start, you should probably know two things about me: (1) I have an addictive personality and (2) I really, really LOVE JRPGs and hate very few of them (I’m looking at you, Final Fantasy III for the DS).

So, whenever I get into a series, I go all out. I buy up all the games, I buy action figures, I buy art books (I could write a book on how much I love art books, btw), and then I sit around with my horde of Current Obsession Swag like Mena Suvari in that bed of roses in American Beauty and just wallow around in it.

Somehow I had missed the Dragon Quest series over the years. I had gone through repetitive and long stretches of Final Fantasy marathons (I have to play IX at least once a year or I’m convinced I might die), Legend of Zelda playthroughs, Level-5 games like Ni No Kuni and Rogue Galaxy, and all the Kingdom Hearts remasters.

I think, more than anything, the reasons I missed the Dragon Quest series for so long was because:

(B) I was exclusively into Pokemon on Gameboy Color. Yes, even Pokemon Pinball!

Because of all these factors, Dragon Quest was a series that I always heard a lot about but never played until way into adulthood.

I saw Dragon Quest Heroes at a store. It was on sale. I was at home a lot because my wife and I just had our first baby. It was destiny. Between taking care of the baby and power naps, I was going to play the heck out of this game.

I liked Dragon Quest Heroes, I really did. It wasn’t exactly the RPG I wanted, but I knew what I was getting myself into before I bought it. I didn’t mind the hack n’ slash stuff as much I had in other Dynasty Warrior-type games, and I immediately fell in love with the art style and how the game didn’t take itself too seriously.

After being so disappointed in all the super serious XIII-titled games in the Final Fantasy series, the world of Dragon Quest felt so refreshing. I couldn’t wait to play a game from the mainline series. I bought a Nintendo 2DS and planned on buying some of the older games right away.

But then E3 happened.

I saw footage of Dragon Quest XI and got super pumped. Along the way, I got sidetracked by Final Fantasy XV (another super serious game that I just didn’t love as much as I should’ve) and Legend of Zelda: Breath of the Wild. (That one was super good, but you probably know that already). Then I spent an incredibly long time playing the fantastic Xenoblade Chronicles 2 and most of Level-5’s games, and before I knew it a couple of years had passed, I had two more kids, and Dragon Quest XI was finally out!

Before we continue: I’m not playing the Dragon Quest games in order.

After XI, I am currently playing through the Erdrick Trilogy (DQ 1-3), then I’ll probably go to VII or IX for a while. Why? I don’t know. I have my reasons, but none of them make sense. This is about me being crazily obsessed, remember? It isn’t supposed to make sense.

Now that that’s out of the way…

B.J. got me Dragon Quest XI: Echoes of an Elusive Age on PS4 for my birthday in November. I expected to like it. I didn’t expect it would become maybe my favorite game of ALL FREAKIN’ TIME, BABY!

Final Fantasy IX has been my all-time favorite game since, like, 2000 but Dragon Quest XI is right there with it now. And, sure, I had played Dragon Quest Heroes before and liked it, but this was my first foray into the mainline series and it was incredible!

It was like having a lot of caffeine for the first time: I got very excited, hyper, and maybe even a little sweaty.

I loved the beautiful yet cartoonish graphics! I loved the playful characters and enemies with all their seemingly pun-based names like Hell Niño (fire-breathing storm clouds) and Bunicorns (a bunny unicorn, obviously). My personal favorite, by the way, is in Dragon Quest III: a crab enemy named Crabber Dabber Doo.

The world of Dragon Quest XI was sprawling, happy, and beautiful. The hero was a handsome dude with hair so good it would make 2013 Jared Leto blush. By the end of the game, every single character felt unique and likeable and extremely real (more on that in another post later). I still think the main villain is sorta meh, but that is one of my very few gripes with this amazing game.

I’m going to get into a more detailed talk about Dragon Quest XI later, but this first bit is just about how I got into the series and why I decided to go nuts and just play every single game this year.

Oh! In the meantime, I have zero Dragon Quest action figures or art books. So, if you want to send me any, I won’t be mad about it.