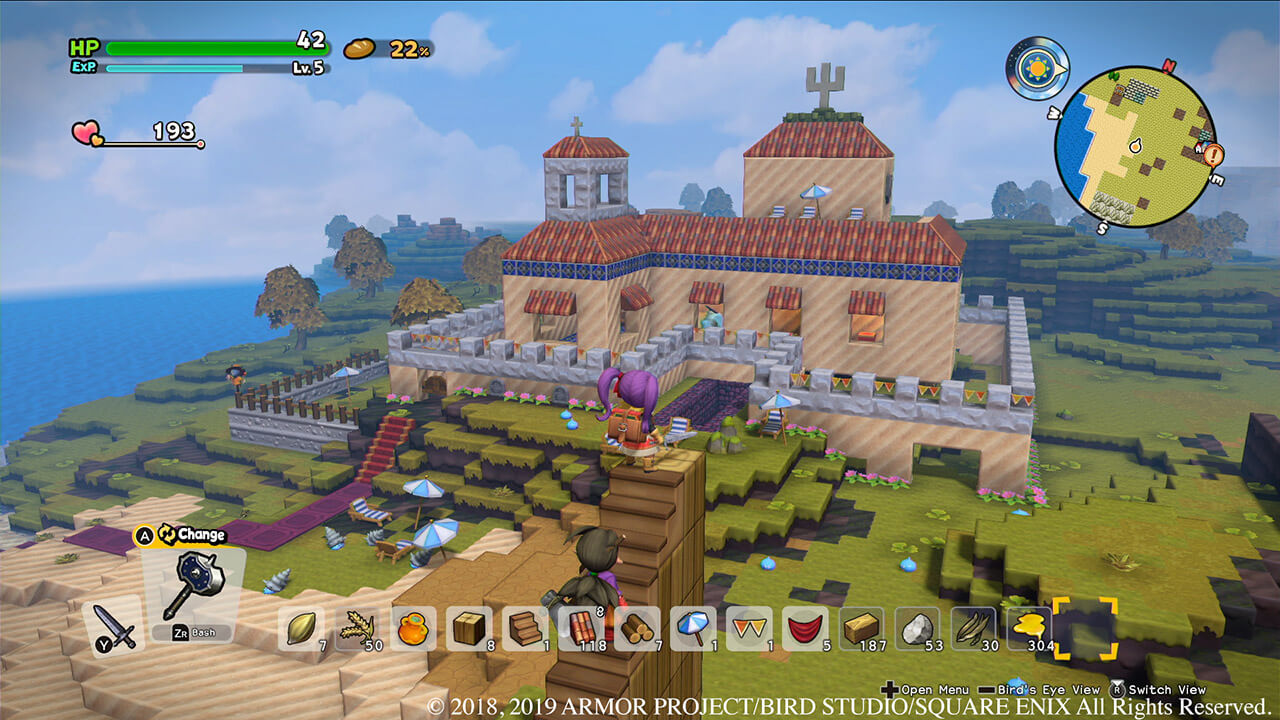 Just a quick note: we did a first impressions episode of DQ Builders 2 Dragon Quest FM (my DQ podcast, for those who don’t know), and it works as a sort of companion piece to this post.

This week, I want to talk about my SPOILER FREE! early impressions of Dragon Quest Builders 2, which released in North America for the PS4 and Nintendo Switch this past Friday, July 12th!

I got the Switch version, because it’s my favorite system for gaming nowadays, and I’ve been in an extremely handheld-only mood lately.

The story of Builders 2 is a kinda-sorta sequel to Dragon Quest II. It focuses on an evil cult, a shipwrecked hero–I mean, erm, builder–and a mysterious new friend named Malroth. (None of that is spoilers, btw, since all of those are mentioned in promotional materials). If you want to learn more about the story, you’ll have to play the game or try the demo. I don’t want to spoil anything here, since the game is so new.

DQB2 is a bigger game than the first. Does that mean it’s better? In this case, yes! There’s more story to keep me playing, more NPCs to interact with, and more monsters to hunt (including “Super Strong Monsters” that can drop rare recipes if you defeat them).

At the time of this writing I’m about 40 hours into the game and almost finished with the second island, Khrumbul-Dun. Much like the first game, you go from location to location, building a base and getting through the story via missions from NPCs. In this one, you go to islands. As someone who loves oceans, islands, and ships–this is definitely my kind of game!

There are other islands, too. One I especially like lets you go on scavenger hunts for a list of items. If you complete the scavenger hunt, then you can have unlimited supplies of an item. The first one, for examples, allows you to get unlimited wood–this makes EVERYTHING so much EASIER!

Builders 2 also has mini-medal puzzles you can find by exploring. If you can solve the puzzle, you get the mini-medal. Remember those shrines in Breath of the Wild? It’s like that, only usually simpler. You can trade in the mini-medals to the Hairy Hermit on the Isle of Awakening and get some pretty cool stuff. I think my favorite so far is the Midenhall Garb, so you can look like the hero from Dragon Quest II!

The day after this game arrived, I got sick. Because of that, I’ve had time to play it more than usual. I don’t remember being this obsessed with a game in a long time. Even Dragon Quest XI, which I absolutely loved, didn’t keep me glued to the screen like Builders 2.

I think it’s because of the gameplay. There are missions, leveling up your base, monster-hunting, artifact-finding, puzzle-solving, cooking, crafting, and building. In other words, there are TONS of things to do in this game. It always feels like there’s something else to do. The hours just slide by.

So far, I’ve thoroughly enjoyed Dragon Quest Builders 2. If you haven’t grabbed it already, I highly recommend it. Right now, it’s even on sale on Amazon. You grab it right here for Switch or PS4.