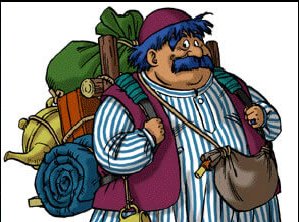 This week, we’re talking about Chapter Three: Torneko and the Extravagant Excavation!

Have you ever wanted to play a game where you woke up, went to work, mindlessly bought and sold weapons, gone home to talk to the wife and sleep, and then repeat it all over the next day? Well, if you have, this is the chapter for you!

Don’t get me wrong. I liked this chapter fine. I liked Torneko Taloon, too. He’s a lovable, oafish merchant with big dreams of having his own store. But it got really tedious working in the store all the time at the beginning of the chapter. It was equally tedious saving up funds to (A) buy your own shop, and then (B) pay for the excavation of an enormous tunnel.

The stories of Ragnar and Alena in the previous chapters had me intrigued about the world and overall story. This chapter kinda just slowed my roll, and maybe that’s why I was here for a long time. I found myself not playing the game very often because of how boring Torneko’s chapter is.

Again, the character and story in this chapter are both fine. It’s mostly the saving up for tons of gold that turned me off. Saving up the 30,000 needed for your own store took the longest. And because you’re playing solo as Torneko, who is a fairly weak fighter with not great defense, fighting monsters to grind for gold can be a bit daunting. Even though Torneko’s got great luck, which means items drop often, getting up to 30k took too long.

I should also mention that you can hire a mercenary to fight for you. But when you’re saving up money, the 600 gold needed to hire an extra hand seems a bit steep. I decided to save my money and play through the entire chapter alone.

Then, once it’s all over, you have to save up 60,000 (yikes!) gold to pay an old man to dig out a tunnel. This is where the chapter gets its name: extravagant excavation, get it? Thankfully, I had read a FAQ and new which swords and armor to save up on. There’s an easy way to get here, you see. You furnish the king’s armory and get 60,000 gold in return. It’s a tall order if you don’t know to expect it, but since I had read ahead, I already had quite a few steel broadswords and iron armor in my inventory from the tedious cave-diving needed to get the original 30,000 gold.

Very little else happens in this chapter. Getting the tunnel open will play a major part in the story later on, but that’s about it. I have the sneaking suspicion that Torneko’s chapter is placed in the middle because of just how boring it is. If this had been the first chapter of the game, I think I would’ve set it down and never returned.

Thankfully, I pushed forward with the promise of a better game on the other side. I was not disappointed. If you can push through Torneko’s chapter, then it’s smooth sailing. The story picks up again in Chapter Four and never looks back.

Like I said, opening the tunnel at the end of this chapter is important for traveling in later ones. Other than that, there’s not a whole lot going on in Torneko’s chapter. There’s a brief time with magical foxes and people turning into animals, which ties into the game’s bigger concept of transmutations. And you also work to get a bridge built between two towns, which also comes into play in later chapters.

Overall, this chapter felt like the weakest link. As much as I liked Torneko as a character, it wasn’t much fun to play as him. Grinding for gold just wasn’t that exciting, and Torneko is prone to dying a lot. By the grace of the Goddess, you can at least get a Steel Strongbox that keeps you from losing half your money every time you die. And once I got my complete party in Chapter Five, I never even used him again.

Next week, we turn up the action a bit by revisiting Chapter Four: Meena and Maya and the Mahabala Mystery!