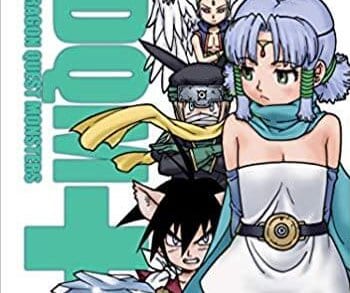 I don’t usually review stuff on here. So let’s think of this as more of a (mostly) spoiler-free overview than a review. I wrote an earlier post on Dragon Quest Monsters+, which you can read here.

Dragon Quest Monsters+ is a standalone, sorta-sequel series by Mine Yoshizaki. The humor and characters are highlights, but the story is really good, too.

The latest volume of Dragon Quest Monsters+ came out on June 11th. I had it preordered, and as soon as it arrived, I opened it up and started reading. I loved Volumes 1 and 2, and I was eager to see what Volume 3 had to offer.

The story of Dragon Quest Monsters+ is centered around a boy named Kleo and his small band of tamed monsters. In the first two volumes, they were looking for Terry (the swordsman from Dragon Quest VI and his own Dragon Quest Monsters video games). Kleo learned all about becoming an M.M. (Monster Master), and lots of hijinks ensued.

If you haven’t read the first two volumes, then I wouldn’t recommend starting with Volume 3, since it’s a direct continuation.

A fair amount of Volume 3 focuses on a new character, Dino. He’s an arrogant M.M. looking to defeat Terry (and Kleo). Early in the story, he gets cursed with cat ears and a tail. To remove the curse, he travels the world looking for Kleo, who’s now gained a bit of a reputation as a great M.M.

I won’t spoil anything else about the story other than that. This volume opens up the world quite a bit, and the cast of characters doubles by its end. That’s not necessarily a bad thing, but I thought it made this volume feel a bit…uneven.

A Boy and His Monsters

The first two volumes were fun reads that focused almost exclusively on Kleo and his band of monsters. Volume 3, however, skips around pretty often. I’m all for more characters and world-building, but so much was happening in this volume that everything felt like build-up without much payoff. I’m assuming everything is leading to Volume 4, where we get some answers and see the new characters developed even more.

I also missed Kleo and his monsters. They weren’t in this volume nearly enough. The humorous back-and-forths between Kleo and his pet slime Slib were my favorite parts of the first two volumes, and we don’t get nearly enough of it in Volume 3.

There were several times where I read quickly through pages just to get back to Kleo and his monster friends. It’s not that these new characters are dull. It’s just that I invested a lot into Kleo’s story, and I wanted to see what he and the gang were doing.

Last, but Not Least…

Overall, Dragon Quest Monsters+ Volume 3 is a good read. I enjoyed it a lot. Did I like it as well as the first two volumes? No. But am I excited to get Volume 4 when it releases later this year? Oh, yeah. Definitely!

If you have read the first two volumes, then I highly recommend this one. Kleo’s story is great, and the characters are infectiously likable. The humor is still hit or miss (mostly hit), and it was nice catching up with the side characters from previous volumes.

You can even buy Volume 3 from Amazon for around ten bucks, which is totally worth it. The link is right here.

The English version of Volume 4 of Dragon Quest Monsters+ is scheduled to release on September 17th.