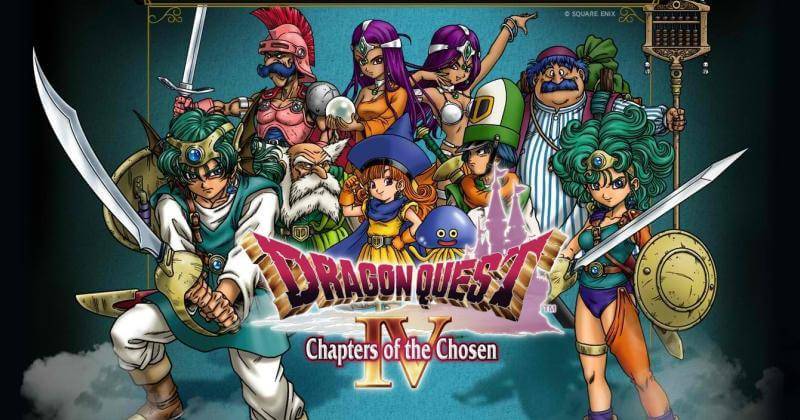 Dragon Quest IV: Chapters of the Chosen–Intro to the Zenithia Trilogy

For the next several weeks, I’ll be discussing Dragon Quest IV: Chapters of the Chosen, which I played on the Nintendo DS. It’s the first entry in the Zenithia Trilogy (which comprises Dragon Quest IV, V, and VI). It was a great game–perfectly merging the great things of the previous trilogy while looking toward the future of the series.

The game is divided up into five chapters, and I’ll be discussing each chapter individually. Today, though, I just wanted to talk about the overall story, gameplay, and features of DQIV.

The gameplay of Dragon Quest IV is both familiar and new. As in the previous entry, Dragon Quest III: Seeds of Salvation, there is a day/night cycle which plays an important role. Sometimes, NPCs can only be found at night–and vice versa. There are quite a few times that the story cannot move forward unless you enter a town at the right time. But don’t worry–there’s a nifty little Night Light that will instantly turn the world to dark for you. And if it’s nighttime already, just sleep at an inn to go back to daytime.

As I mentioned before, the game is divided up into five chapters. Each chapter deals with a separate character or group of characters. This serves as a great introduction to all the playable characters in the game. Think of it like Octopath Traveler, only about thirty years before Octopath came out. The chapters are also significantly shorter than Octopath, and our heroes eventually come together in Chapter Five to take down a bad guy named Psaro.

This is the first Dragon Quest game to feature playable characters with fixed names, personalities, and back stories. Dividing the game into chapters that slowly introduce you to the world and characters was truly great. I loved every minute of it.

The story for Dragon Quest IV is a bit different from the previous entries as well. Instead of there being a dragonlord or demon lord, there’s simply a man named Psaro who is trying to learn the theory of evolution in order to destroy the world. Psaro makes for the first truly interesting bad guy in the series, too. He’s in love with an elf-girl named Rose, and although outside forces may be using that love to manipulate him into doing terrible things, Psaro doesn’t feel like a run-of-the-mill big baddie. He actually has feelings, which was a nice change of pace.

SIDE NOTE: I have no idea how Squaresoft didn’t get sued when they created Sephiroth. Psaro is just Sephiroth. They both have long platinum hair, really long swords, and become products of scientific experimentation who turn into crazy weird monsters. Go ahead. Look it up. They’re the same guy.

Eventually, the Hero and all the other characters in previous chapters band together and explore the world. Lots of mythology and backstory ensue, until the final confrontation with Psaro, who has SEVEN forms with no breaks between!

There’s a postgame, too, which includes a new playable character, new bosses, and even a couple of new dungeons. But I don’t want to spoil anything here by being too specific. Let me just say that the postgame was well worth it, and that I had a good time getting the last playable character.

Overall, I found the story of DQIV to be really good and a nice improvement over the previous entries.

The battle system is only slightly different from previous entries. Instead of hiring people with certain jobs to work for you, like in DQIII, each main character in IV represents a job. For instance, Ragnar is a warrior, Kiryl is a priest, and so on.

The main difference here is that there are so many characters, so a few of them share similar jobs. For instance, Meena (a fortune teller) is a healing class like priest, while Borya (a mage) and Maya (a dancer) both share spells typically reserved for only mages. So, players have to choose which spells they’d rather use. Maya, for example, has more damage-dealing magic while Borya’s magic focuses on buffing allies and debuffing enemies.

Like most Dragon Quest games, this one has Tactics you can set to change how your characters will fight. While the AI on the Nintendo DS version of the game is fairly good, I’ve been assured that it’s much better than the original AI on the NES (Thanks, @Alec_Burton3 on Twitter!) and even watched a cool video of the final boss fight on the NES. My main complaint with the AI is that when enemies would use Bounce (a spell that reflects magic off them), the characters controlled by AI would still cast spells on that enemy. Several times, Maya died from repeatedly casting Bang on an enemy with Bounce.

The biggest change to the battle system is the wagon. Players unlock the wagon fairly early in Chapter Five (once you have access to most of the main characters). Characters outside the main four battlers will “ride” in the wagon. In the overworld, if your party is wiped out, the characters in the wagon will come out and take over. This means it’s a bit harder to die completely, since you have back-up team members.

And late in the game, you can even summon the wagon to your side to have extra help in the final battle. Thanks, Baron’s Bugle!

I plan on delving into Dragon Quest IV way more in the upcoming weeks. This is just an overview of the whole game. To understand a game like this, I think it’s best to explore each chapter individually.

See you next week! In the meantime, go play some Dragon Quest! That’s what I’ll be doing.