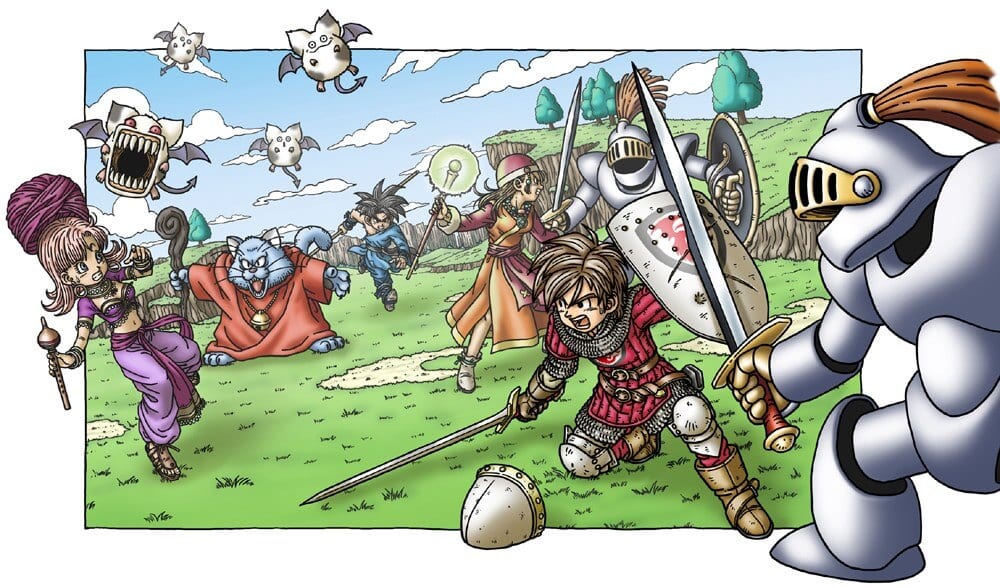 Dragon Quest IX: The Gortress, the Gittish Empire, and Beyond

This is the final week for me to talk about Dragon Quest IX, which is a game I’ve thoroughly enjoyed. You can check out my first post on the game here, and my second post here. This week, I wanted to discuss a lot of the endgame story, areas, and characters.

For me, this last third of Dragon Quest IX is really when the story gets going. Everything up until that point felt like the beginning parts of an MMO, where quests and stories all serve a purpose: to introduce you to mechanics you’ll be using for 100+ hours once you beat the main story. That’s really not too far off the mark, since Dragon Quest IX feels like Square Enix/Armor Project testing the waters before releasing the MMORPG, Dragon Quest X.

On its own, the main story of Dragon Quest IX is still very good, and it has some of my favorite villains, and one of the best main villains in the entire series.

For me, the story didn’t really pick up until you meet Greygnarl the dragon and end up at the Gortress. The Gortress is a fortress of the Gittish Empire, and it’s very reminiscent of Gallows Moor in Dragon Quest VI, although it also shares a similar vibe to the prison scenes in Dragon Quest V. This is also where you meet ole “fatguts,” or Sterling. He’s the true pilot of the Starflight Express. I enjoyed this part of the game A LOT, and I hurried through the rest of the story because I became so invested in it.

And once the story really gets going, it doesn’t let up until you reach the credits. It turns out, there’s an evil empire (and I’m like, “What is this? A Final Fantasy?”). There’s also an evil emperor, and three military baddies with animalistic features and pun-based names.

These three are known as the Triumgorate. The first one you meet is Hootingham-Gore, a lieutenant who (hoo?) looks like an owl. The other two are Goreham-Hogg (a pig, obviously) who makes lots of bacon puns in his speech, and Goresby-Purrvis (a cat, who purrs a lot). They seem like callbacks to the Order of Zugzwang in Dragon Quest V, even if they don’t really look like Slon the Rook or Kon the Knight. These three are some of my favorite villains and bosses in any of the Dragon Quest games. You fight each a couple to times, so hopefully you’ll like them, too.

Most of the endgame takes place within the Gittish Empire. You start off in the Gortress, but after its liberation you’re free to roam around the wasteland, collecting materials and killing baddies. You will eventually have to explore Gittingham Palace, the seat of the empire and home of King Godwyn.

I enjoyed this area a lot. The maps were cool, and the bosses are fun. Gittingham Palace is full of bosses, since you have rematches with all of the Triumgorate, fight the evil dragon Barbarus, defeat King Godwyn, and then encounter the true villain of the game: Corvus.

Like I said earlier, Corvus is one my favorite main villains in the entire series. His story initially seems like some parallel to the Biblical story of Lucifer, since he falls from the heavens after being cast out. However, his story is also like Psaro’s from Dragon Quest IV, since his turn to evil is based more on love, heartbreak, and fear. He’s a well-rounded villain, and he has a strong connection to your hero, too. After all, he was the mentor to Aquila, who’s your mentor now. He’s like the Qui-Gon Jinn to your Anakin Skywalker. And at the end of the game, you’ve got to kill him or else the world will be destroyed.

This was my third post on Dragon Quest IX, and it’s also my last (for now). This was a really great game that I enjoyed a ton. It was also the final game in my year-long Dragon Quest Quest, so it has a special place for me.

I’m not sure where I go from here, since I’ve finished playing every mainline DQ game within a year. However, I know I’m not going to stop talking about DQ anytime soon.

Whether this is the first post of mine you’ve read or you’ve been here since the beginning, thanks for reading!

See you next week!