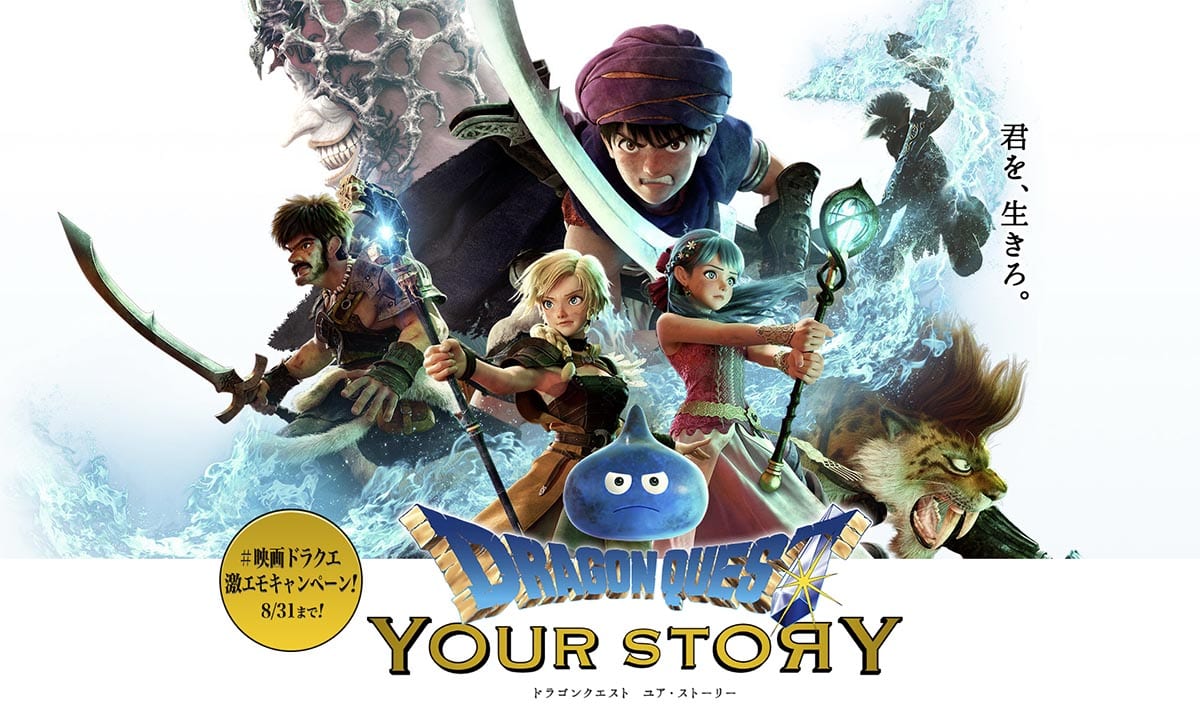 Dragon Quest Your Story released on Netflix on February 13, 2020. I was understandably excited. You know this. I know this. We all know this. I’ve talked about it on the Dragon Quest FM podcast, I’ve written posts about it, yada yada yada. The point is, you know that I was excited to see it. But did you know I was so excited to see it that I woke up at 4 am and watched it twice before work the day it came out? (I can feel you judging me).

So…yeah. I get it. Maybe I’m a little biased to be reviewing this movie. However, I tried to look at Dragon Quest Your Story contextually and cinematically–in other words, how it feels as a completely standalone movie (that just so happens to adapt its story from Dragon Quest V). So, was the movie really THAT good? So good that I just had to watch it twice before starting my day? The short answer is yes. The long answer is a bit more complicated than that.

The movie mostly follows the plot of Dragon Quest V, which has one of the greatest stories of any JRPG ever. Although, due to time constraints and thematic changes, the two stories sometimes differ quite a bit. Our protagonist this time around is a boy named Luca, the son of Pankraz, who grows up to befriend famous Dragon Quest monsters like a slime and sabrecat. He’s looking for his mother and trying to save the world. Along the way, he meets a couple of childhood friends named Nera and Bianca and must choose which one to marry and help him on his crusade. That’s the cardboard cutout version, anyway. I don’t want to spoil more for you.

There’s a lot to like about this movie. The animation feels somewhere between a Disney movie and something from Dreamworks’ How to Train Your Dragon. It’s gorgeous, with some great attention to detail and lighting. I know some folks were disappointed that they didn’t use Akira Toriyama’s trademark DQ art style, but I think this Disney-fied, CGI works great for the film. It also helps to set the the tone that this is a standalone story–inspired by a Dragon Quest game, but also separate from it.

Then there’s the humor. This movie is surprisingly hilarious. There were many times I laughed at something I thought only a Dragon Quest fan would laugh at, but then my wife and kids would laugh, too. The takeaway? The humor in Dragon Quest Your Story is universal. It’s sometimes irreverent, but it almost always works.

The film really hits its stride during its second act, when Luca travels to Briscoletti Manor and is tasked with taking down Bjorn the Behemoose. It’s during this time that he’s reunited with Bianca and Nera, and the real romance of the story takes place. It’s also during this time that that all the moving parts within the film come together and sync perfectly: there’s the love triangle drama, the action sequences against Bjorn, the slapstick comedy and well-timed facial expressions, expert uses of lighting and CGI, and interesting story beats that move our heroes further toward their destiny. It all meshes together so well that this middle chunk of the movie (where a lot of animated films start to slow down for a while) is both completely unforgettable and an incredible highlight.

The movie also goes out with a bang. I won’t spoil anything too much here, but the battle sequences toward the end of the film–along with plenty of cameos of old friends–will put a big sloppy grin on your face. Then there’s the “twist” at the end that you’ve probably heard about in at least some capacity. This brings us to the real spoilers part of this review. If you haven’t seen the movie yet, then go ahead and skip down to the “Bad” section. If you have watched the movie already, then feel free to keep reading.

The twist of the movie comes near the end, when it’s revealed that the big bad guy isn’t Nimzo after all, but a virus…named Virus. Some hackers who think video games are for children have put a virus into the VR experience in order to teach adults a lesson. Our hero Luca is actually a player in our world named Luca (he’s named the Hero after himself, like a lot of us do). There’s a small flashback showing us Luca in the real world, before snapping us back into the game. There, it’s revealed that our slime pal Gootrude is an antidote who can kill Virus.

It’s a jarring twist, to be sure. I thought it worked great. First off, there are some truly amazing scenes in which each part of the movie’s graphics is swiped away. It’s a nice way to show the effort that goes into making animated movies (and modern video games), and it probably would’ve won an Oscar if it’d been placed inside a Pixar movie. For evidence, you can look at a similar scene depicted in Pixar’s Inside Out, which actually won an Oscar for Best Animated Film.

The twist also hits me emotionally in a lot of ways. It shows Luca getting a Dragon Quest game for the first time, and then sitting in front of the TV for a long time while playing it for hours and hours. The takeaway is that these characters are real because they feel real to the player. If you’ve ever read any interview with Yuji Horii, then this ending will feel right at home. After all, this is a guy whose ethos is to make games fun and enjoyable for gamers–children and adults alike. It’s the same who guy who last year said, “Life is an RPG, so have fun!”

Honestly, I don’t know why it’s so surprising that this is the ending to the movie. After all, it’s called Your Story, AND it was released as a gift to fans during a weekend festival celebrating (you guessed it) the fans. So, of course the ending to Your Story is a celebration of the fans. If it was simply a retelling of Dragon Quest V, it’s IMDB rating might be higher but the whole movie would’ve lost whatever purpose it served for existing in the first place.

My only complaint with the movie is that the beginning feels rushed. We see Bianca and Nera in footage (some of it fake) from the Super Famicom version of Dragon Quest V, but we don’t see them in CGI until they’re adults. Since the two are so important to the story, it would’ve been nice to see them as CGI renders as children, and to show more interactions with them and kid Luca. This is especially important since it’s such an important plot point about forty-five minutes later.

The bits with Pankraz also feel rushed. We barely get to know him in the movie. I was expecting something more akin to Mufasa’s death in The Lion King, and instead Pankraz’s death feels a little flat–especially if you haven’t played the games. He’s in the movie for about four minutes, and barely speaks during that time. The scenes that exist in the beginning are beautiful, however. We get a short scene in which kid Luca is following in his father’s footsteps–literally, he’s carefully stepping into the footprints Pankraz has made in the snow. Seconds later, we see them snuggling up by the fire. Both are beautiful and heartbreaking to watch if you know where the story is headed already. Still, I would’ve liked for them to have developed this more in the film. Even an extra ten minutes of character development and showing that father/son relationship could’ve helped.

Honestly, I can’t find a single thing to put in this section. While I felt the beginning was rushed, it wasn’t enough to ruin the movie for me. And like I said, those scenes that actually made it into the film are beautiful.

Dragon Quest Your Story is everything I could’ve wanted in a Dragon Quest movie. While keeping close to a beloved story from the mainline video game series, it also sets itself apart by deviating from the story and creating something all its own, something that can exist in a completely separate medium. As a love letter to fans, I think it works just about perfectly. As a standalone film, I wasn’t quite sure. But then my wife and daughter watched it. Neither knew a thing about Dragon Quest V, and they both loved the movie. So, maybe it works as a standalone film, after all.

Whether you’re a longtime fan, a newcomer to the series, or you just like animated films, Dragon Quest Your Story has something for everyone.