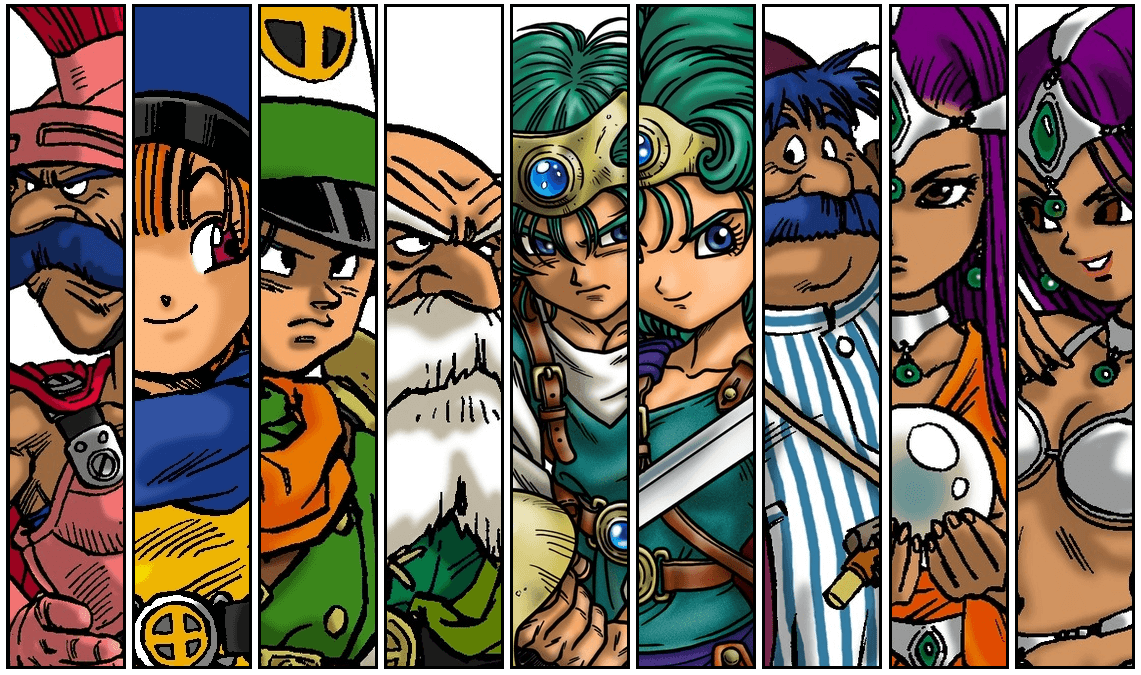 For the last few weeks, I’ve been talking about Dragon Quest IV: Chapters of the Chosen. You can find my previous posts on this great game here.

This week, we’ve finally reached the last (and longest) chapter: The Chosen!

Besides a very brief prologue where we first see our Hero, the Chosen is absent until Chapter Five of the game. In that prologue, you get to choose whether or not you want a male or female hero. I went with female, since I’d been playing as male heroes in all the other games. But it doesn’t really matter which one you choose.

Now, back to Chapter Five!

Once again, we’re back in the peaceful village with the Chosen. After an attack on the village and some heartbreaking events, our hero sets out on a journey across the world, where he or she will meet up with all the other characters we’ve met in previous chapters. Pretty cool, huh?

The first part of Chapter Five is really just collecting the various members of your party. You can see the tunnel Torneko excavated and the bridge he helped get started, as well as visit his store. You go for Round Two with the Marquis de Leon and finally avenge Meena and Maya’s father’s death. You help rescue Alena (the real one, this time) and team up with her, Kiryl, and Borya. And then you meet up with Ragnar, who’s been looking for you for a long time.

It’s fun getting to collect the people from previous chapters and getting to figure out which party works best. Since the game let you play as everyone early on, you should already have an idea of who you want to focus on versus who’s sitting in the wagon.

Speaking of wagons, Dragon Quest IV is the first game in the series to feature the wagon, where your extra party members will sit. It’s a mechanic that’s replicated in both V and VI, as well as non-Zenithia trilogy games like DQ VIII. It’s also very nice, since that means everyone in the wagon still gets experience even if they aren’t fighting with you.

The final half of Chapter Five involves stopping the revival of Estark (in the mines, which we visited in Chapter Four) and Psaro the Manslayer’s romance with a elfin girl named Ruby, who’s locked away inside a tower. Chapter Five may be named after the Chosen, but its story is shared with Psaro. We learn a lot of his backstory here, as well as his motives, fears, and dreams.

And while we’re on the subject of Psaro…

I know I’ve said this in an earlier post, but Psaro is probably my favorite villain in the entire series. Psaro is a more human, well-rounded villain than we’ve seen in previous entries. Honestly, he’s more well-rounded than the villains in later entries, too. You almost feel bad for the guy.

Dragon Quest IV is the first entry in the Zenithia Trilogy. It deals with the skyward kingdom of Zenithia, the Zenith Dragon, Estark the Lord of the Underworld, and–of course–collecting the Zenithian equipment.

I loved the Erdrick Trilogy, but I’ve loved the Zenithia Trilogy even more. And while players go around the world and collect the Zenithian equipment much in the same way players look for Erdrick’s legendary equipment, I found myself enjoying the story of IV way more than any of the Erdrick entries.

Once players have collecting their friends, stopped Estark, and collected all the Zenithian equipment, it’s finally time to take on Psaro. I used the Chosen, Alena, Kiryl, and Ragnar for the final fight. Mostly, I did this because I prioritized physical damage for magic in this game so I would’t have to worry about MP as much.

Don’t read past here if you don’t want some major spoilers. Instead, you can skip down to the final section.

The final fight with Psaro is one for the ages. He has seven forms, which may be more forms than any final boss I’ve ever had to fight (all the Ansem fights at the end of the first Kingdom Hearts comes pretty close). I managed to beat him on my first try, although several party members were dead and had to be replaced by people on the wagon (thankfully, you can use the Baron’s Bugle to summon the wagon into the final dungeon).

The game also has some nice postgame content. While I haven’t tried it all (yet), I did take on Lo Mein and Chow Mein and get Psaro as my final party member.

I was unsure if I was going to like this kind of narrative, but the division of chapters was actually pretty cool, and it gave Dragon Quest IV a unique and storybook feel.

I cannot stress how much I loved this game. My only complaint is that the DS version doesn’t let you talk to your party. It’s one of my favorite things in these games, and they left it out of the DS version. Weird, right?

Because of that, I feel like I missed out on some story points. I know Kiryl is in love with Alena, for example, because I’ve played Dragon Quest Heroes 1 & 2. I’m assuming that comes into play in IV through the party chat feature. I’m sure there’s even more stuff I missed out on because of the missing party chats.

Other than that, I don’t really have any complaints. Dragon Quest IV is one of my favorite entries in the series, and as I’m writing this, I’m already contemplating playing it again. It’s not just fun; it also has a ton of replay value.

Thanks for reading all the posts (or maybe just this one) on Dragon Quest IV! Next week, I’m going to start discussing my play-through of Dragon Quest V: Hand of the Heavenly Bride!