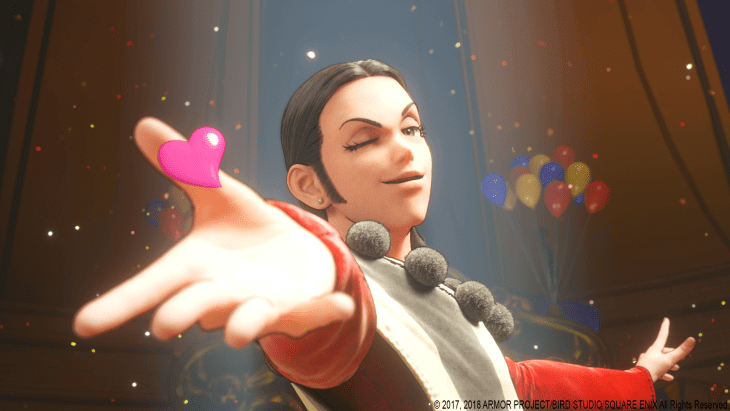 Ten Reasons I Love Dragon Quest (And You Should Too!)

Dragon Quest is a series known for its enemies. Its Blue Slime is iconic and a mascot for the entire series. Its as eponymous to Dragon Quest as chocobos to Final Fantasy or Pikachu to Pokemon. The other enemies in Dragon Quest are just as memorable. You can’t think of Dragon Quest without thinking about sand golems and drackies and metal slimes.

The enemies haven’t changed much in the series’ run of over thirty years. Why? Because they’re so darn good and memorable. A lot of them look wacky, and most of them have names based on puns, and you’ll love them. If you don’t snicker at least once while reading an enemy’s name in Dragon Quest, then you are a robot–or maybe even a sand golem yourself.

The towns in Dragon Quest are always interesting. One of the highlights of the series is that each town you visit usually has its own unique storyline, characters, and vibe. Maybe the village is being possessed by the Demon King, maybe everyone is turned to stone, or perhaps there’s a mysterious love triangle that only our heroes can solve. Even at the start of the series, the towns feel distinctive and interesting.

One of the mainstays of the series is having towns to visit that have their own problems and own culture. Many towns even have their own languages or accents. Dragon Quest VII does it so often it’s a borderline complex. The newest entry, Dragon Quest XI, does this to perfection. Each town feels massive and unique, and each one has its own culture–from art to cuisine to architecture.

I’ve heard people complain that Dragon Quest doesn’t ever change its combat and that makes it boring. Well, let me strongly disagree. Like, Carver from DQVI, with all those muscles? Yeah, that kind of strongly disagree.

The combat in Dragon Quest is amazing. While it does get tweaked a bit from game to game, it mostly stays the same. It’s fantastically turn-based, and most abilities and spells transfer from one entry to the next. This is nice because it means once you learn the spells and abilities, you know them for pretty much every other game in the series. Personally, I like that familiarity. I don’t like wasting time going through entries in the same series trying to figure out that Burn/Blaze/Fire/ Scorch/Flames/Whatever is actually all just the same spell but with a different name.

Dragon Quest games also have Tactics, meaning you can let the AI do most of the fighting for you. This doesn’t mean you don’t have control. You can always switch Tactics. This means, for example, you can change Tactics from “Show No Mercy” to “Focus on Healing” if you get in a fight with a powerful monster that’s threatening to wipe out your party. And you know what? The AI in these games has been consistently good and often downright spectacular.

As for the turn-based combat, it’s awesome. Maybe it hasn’t changed much since 1986 because it’s just soooooooo good. Did you ever think of that? You didn’t, did you?

The people in Dragon Quest are even wackier than the monsters. Almost every NPC you talk to has their own personal quirk, or weird backstory, or random eccentricity. In Dragon Quest VII, for example, you can run into a dude who’s just peeing in a corner. Why? No reason at all, that’s why. In Dragon Quest III, you might encounter a strong father who’s willing to perform (that still mysterious and explicit art of) puff-puff on your hero. ‘Cor Blimey, indeed.

In every Dragon Quest I’ve played, there seems to be at least one random NPC doing something weird for no reason at all.

It might seems silly that collecting little coins called mini-medals is one of my favorite aspects of the series, but it’s completely true. I love finding them! I scour every bookcase, dive down every well, break every pot, and open every treasure chest looking for them. In older entries, I constantly tap the “A” button to try to find random ones scattered on the ground. The mini-medals can be traded to a collector in exchange for (usually) hard-to-find items. Very rarely have I actually needed these items, however. I do it purely for the enjoyment of collecting these tiny coins. I missed collecting mini-medals in DQ1 & 2, and I was super excited when playing the iOS version of DQ3 to see that they’d been added.

Seriously, I love looking at art books for my favorite movies and video games, and this one may be my favorite. The art of Dragon Quest is absolutely distinct and beautiful. Akira Toriyama has designed the characters and defined the art style since the very first Dragon Quest in 1986.

I love the art so much that I’m disappointed in the lack of art books for this series. Right now, there’s only one I can find in English and the rest are in Japanese (but still look beautiful). I’m about halfway through Dragon Quest Illustrations right now, and I’m totally loving it. I even collect the strategy guides so that I can catch snippets of extra artwork. If I’m not playing a Dragon Quest game, there’s a good chance I’m looking at some Dragon Quest art. Is that insane? Maybe.

I can see you already snoozing at the word history. Don’t! Dragon Quest has done more for the JRPG genre than any other series. If you have a favorite combat system, storyline, or RPG gameplay mechanic, the chances are that Dragon Quest did it first. The job systems in Dragon Quest has been copied countless times by other franchises like Final Fantasy and Shin Megami Tensei because it’s so darn good. And Dragon Quest V let you recruit monsters years before Pokemon did. No, I’m not trying to start some geeked-out franchise war. I’m merely trying to stress just how innovative and important Dragon Quest is to an entire genre of games.

I typically hate casinos or gambling mini-games. The Gold Saucer in Final Fantasy VII is one of the few things I hate about that game. The casino in Ni No Kuni: Wrath of the White Witch? Don’t need it. The slot machines in Legend of Lagaia? Nope. Hard pass. One of the few exceptions is playing Tetra Master in Final Fantasy IX. I love Tetra Master!

Almost all the Dragon Quest games have casinos. Some of the games even have multiple casinos. For some reason, I don’t mind them in this series. I can’t really explain why. But I can tell you that playing roulette with my wife in Dragon Quest XI is one of the funnest times I’ve had in a video game in a long time. When we hit the jackpot, we danced around the living room like it was real money.

Maybe the reason I don’t mind gambling halls and casinos in Dragon Quest is because (as far as I can tell) the games never require you to play there to advance the story. Side quests do, and you might want to play around in a casino if you want some good gear, but there’s no requirement. It’s not like in FFVII where you have to spend an hour or longer running around the amusements of the Gold Saucer to move along the story. Heck, you could play through some of these games and never even find a casino unless you dive down the right well.

For whatever reason, I’ve enjoyed most of the casinos I’ve found in Dragon Quest games. And like I said, playing roulette in DQ11 was definitely a highlight.

Dragon Quest is weird. I mean that in the best possible way. I LOVE weird things. If I call something or someone weird, it’s the highest compliment I can give. I married by wife because she’s weird (she once acted like a goblin for an entire day in college because I thought it was hilarious), my best friend is B.J. Keeton because he’s weird (he is, after all, a grown man who paid a lot of money to un-ironically have a rainbow unicorn cake for his thirty-sixth birthday), and my favorite game series is Dragon Quest because it’s (drumroll) weird. If you read the sections about enemies, towns, and people then you already know it’s weird. Take the picture here:

Does this have anything to do with the story? Nope. Anything to do with this town? Not really. But does Ed at least tell ya “somethin’ real nice?” Kinda. So, why is it in here? Because, dear friends and colleagues, Dragon Quest games are super weird. This isn’t even the weirdest thing I’ve found. I just happen to have taken these photos while playing DQ3 and thought I’d share them.

I always enjoy finding good characters in video games. Vivi from Final Fantasy IX, Joel and Ellie in The Last of Us, and Roland in Ni No Kuni 2: Revenant Kingdom are all good examples of characters I’ve loved. They felt real to me. They felt like friends. I legitimately cared about what happened to them. Dragon Quest has its own share of memorable characters.

Sylvando from Dragon Quest XI is undoubtedly my favorite, but I’ve enjoyed almost every playable character in these games (I still hate Maribel’s personality in DQ7, even though she makes one heck of a Sage and Druid). Yes, the early entries didn’t really have characters, but for the ones that do–they are mostly fun and thoroughly enjoyable. If I ever get around to compiling a list of my favorite DQ characters, it’s gonna be hard to rank them. Spoiler: Sylvando is #1.

That’s right. My #1 reason for loving these games is that they’re fun. Very rarely am I stressed out while playing a Dragon Quest game (the exception is DQ2 and, specifically, that battle with Malroth that I’m never going to shut up about).

I tend to play these games in the evenings, usually after the kids are asleep and I’m winding down for the day. Dragon Quest has been a great way to chill out after the stresses of the day, and it’s much cheaper than therapy or alcoholism. A lot of these games I’ve played either on my phone or on my 2DS, for an hour or two (or five) before bedtime.

It’s not that they aren’t exciting; they definitely are. It’s just that there’s something about these games that always feels relaxing. Maybe it’s the familiarity and the humor, or maybe it’s the laidback atmosphere they all seem to have. Even when the world is ending, Dragon Quest is never without its fun sense of adventure and upbeat spirit.