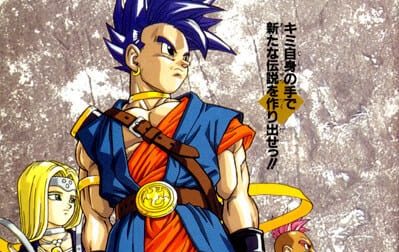 I Need a Job!: Early Parts of Dragon Quest VI

For the first part of my discussion of Dragon Quest VI, I want to talk about the earliest parts of the game, the parts where you don’t yet have a Vocation. At this point, the story is primarily concerned with an evil sorcerer named Murdaw and his war with the kingdom of Somnia and its surrounding areas. It’s an interesting way to start the game, and it kept me playing, even though I wish they had introduced the job system much earlier.

Before playing Dragon Quest VI, I knew the game had a bit of a mixed reception among fans. And at first, I wasn’t exactly thrilled with the beginning of the game. It felt slow and I didn’t love any of the main characters–especially after finishing Dragon Quest V, which has arguably the best characters in the series.

But you know what? Before we continue, let me say that I enjoyed this game a lot and plan on defending it in next week’s post.

Don’t get me wrong. The first ten hours of the game are the weakest. And that’s really what I want to talk about today. You know, let’s get any of the negative stuff out of the way before getting to the fun stuff next week.

You see, there’s lots of times when you aren’t sure where the story is going, where you’re supposed to go next, or what even is going on. At the time of this writing, I’ve played every mainline DQ game except IX and X, and VI is by far the most confusing in terms of storytelling and pacing.

Remember: I liked this game a whole lot.

But: I think the beginning of the game is weak–not necessarily bad.

The prologue sets up an interesting story that comes to a close right around the end of Act One. The hero starts off in Weaver’s Peak, a mountain village known for its (you guessed it!) weaving. The mountainside that serves as a battle tutorial for the game was a lot of fun, and it was nice getting to jump right into exploring so early in the game.

Early on, you fall through a hole in the world and end up in another realm. I spent a long time wandering around before I realized that you’re just supposed to jump down a well and head back to your own world. Jumping down wells to cross worlds is a mechanic you’ll use a lot, so I guess they wanted to introduce it early in the game. Still, it felt out of place at this point in the game, and it was honestly just confusing since it was such a brief detour.

My only real complaint–and it’s a complaint I have with the entire game–is there’s a lot of unnecessary walking. Because you have to travel between the Real World and the Dream World, you have to walk a lot. At first, it’s between wells. After Alltrades Abbey is restored, it serves as the main hub for your interworld travels (and learning your Vocations). Eventually, there are easier ways to travel between the worlds, but initially, it’s just walking to the wells.

(Seriously, I got super tired of walking in this game.)

As I said earlier, the characters in Dragon Quest VI don’t feel as fresh or fully realized as those in Dragon Quest IV or V. I think that’s maybe why so many people hate on it. Personally, I found it to be the weakest of the Zenithia Trilogy of games, but I still liked it a lot. In my current ranking of the mainline series, I’d put DQVI at the #4 or #5 spot.

Carver is probably my favorite character from the game. He’s a carpenter’s son with big biceps and a tiny brain. He’s a lovable oaf that is an excellent fighter. The Hero makes a good protagonist, even if he feels a bit generic. The other non-optional characters: Millie, Nevan, Ashlynn, and Terry* all feel a bit underdeveloped and lackluster. It’s not that they’re bad characters, it’s just that–like much of this game compared to the rest of the trilogy–they all feel weaker.

*And what is up with Terry? Someone needs to explain why so many people like him. He’s kinda douchey and you don’t get him until late in the game. He feels like a knock-off, poor man’s Link. So what’s the appeal?

Once the primary story of Act One comes to a close, the game gets a lot better. Part of this is that the real, true story of Dragon Quest VI starts. That’s right, once again you think you’ve reached the end of a game–but it’s really only the beginning! (Side note: If you aren’t used to DQ tricking you into thinking a game has ended, then you haven’t played enough DQ. Seriously, this a trope they use in, like, at least half the games.)

That’s really it for the negative stuff. I was pleasantly surprised by how much I enjoyed this game. Yes, the beginning parts were weak; however, overall, I thought it got much better after Act One.

The biggest reason the game got better for me is because the Vocations system is introduced. I talked about the system a bunch in my posts about Dragon Quest VII. I loved it in that game, and I love it in this one. Although it’s not as refined as VII‘s, it’s still pretty impressive. I didn’t have any issues with it.

For me, that’s all Act One was really missing. Turns out, to have a good time in Dragon Quest VI, all I needed was a job.