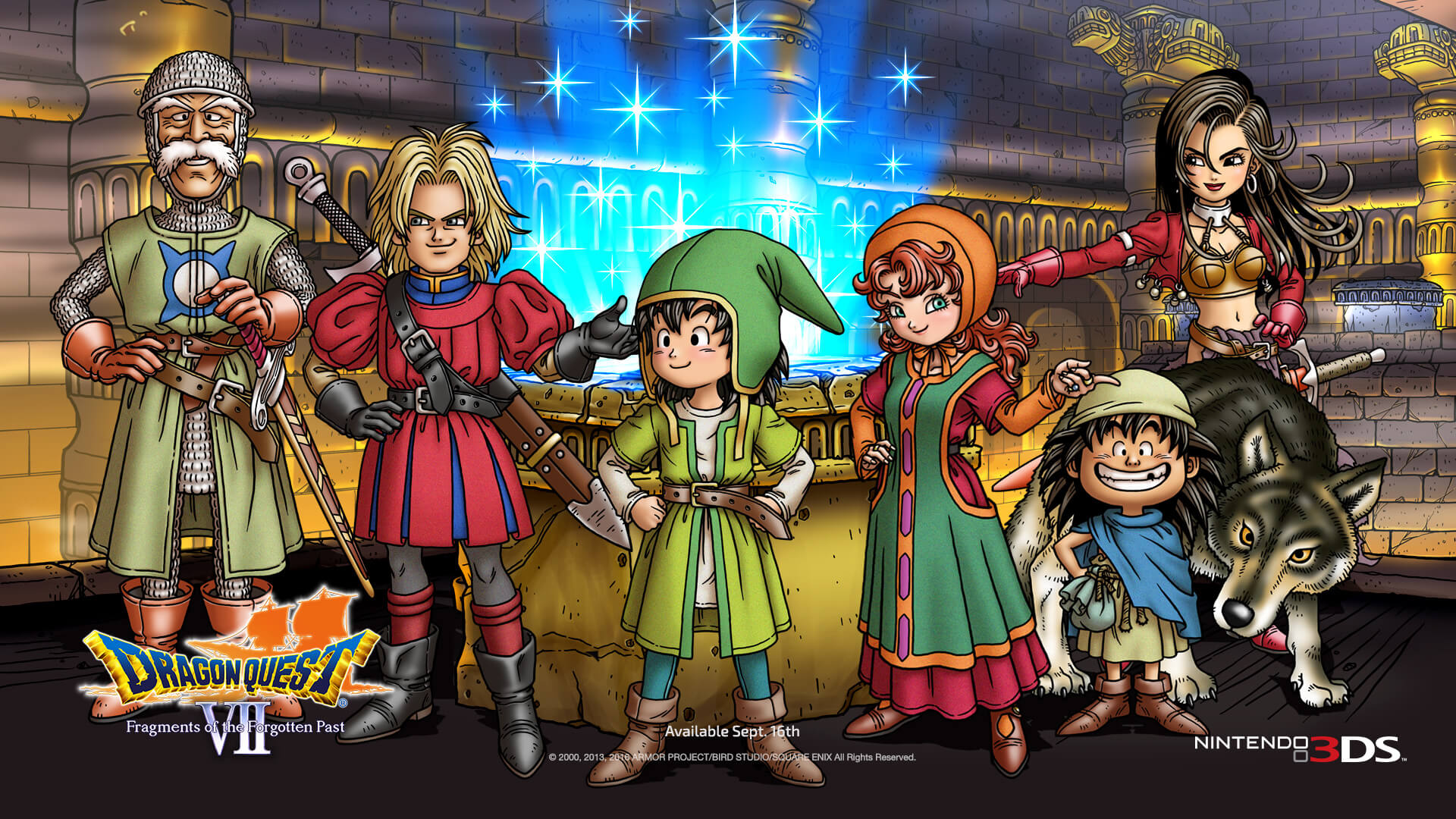 It Was Bound to Happen Eventually: Playing Dragon Quest VII!

I love Dragon Quest! You know I do. After playing four of them this year (and it’s only March!), I was beginning to wonder if I’d find a DQ game I didn’t love. It was bound to happen eventually, right? There had to be a black sheep in the family–one game that just didn’t quite live up to the rest of the series. Well, folks, I think I found it!

It Was Bound to Happen Eventually…

Dragon Quest VII: Fragments of a Forgotten Past has an odd way of telling its story. Players collect fragments. Once enough fragments have been collected (usually 3-5), you’re able to place them in a pedestal that sends you to a location in the past. You play through this past scenario, and then return to the present, where this new location is now accessible. You then play through the present-day scenario. The entire game follows this simple formula.

If you thought my description of the game made it sound fun, please think twice. Dragon Quest VII is an overly long, drawn-out game that sometimes feels arduous and mostly just feels boring. I’ll be completely honest here: I didn’t like this game. It had at least one (ONE!?) redeeming quality, which we’ll get to later on.

Now, I try not to be too negative. I try to find the good in even the most terrible games. Granted, some games are so terrible I have to quit them before getting to the end. I was fearful that I would eventually find a game in my beloved Dragon Quest that would be bad. In that regard, DQVII didn’t disappoint. But in nearly every other aspect, Dragon Quest VII was a MASSIVE disappointment.

The pacing in this game is terrible. There’s no way to sugarcoat it. I played the 3DS version for the most part (although I did take a detour and play the Japanese PS1 version for a while), and even though they speed up the beginning of the game for 3DS, it’s still a slog. You spend two hours or more just running back and forth between the same few locations to watch a twenty-second conversation before sprinting back. Rinse. Repeat.

At the start of the game, you can’t even find enemies to fight to break up the monotony of running back and forth between the same NPCS and towns over and over again. You just have to smile through the suffering with the promise that eventually, this game will get good. Spoiler: It never really does.

I beat this game in around 67 hours. Most people play it even longer. Be prepared to spend half of those hours (thirty or more), just backtracking for no reason at all.

Allow me to elaborate: There are several points in the game where you will spend two or three hours at a time doing nothing but being forced to talk to every NPC in a village (even the freakin’ cats) before moving on to another village where you have to speak to every NPC in town in order to advance. Then, once you think you might get a chance to fight some enemies or do something fun, you have to run back and forth between the two towns for approximately half an hour–for no reason at all, really. Just to talk to more NPCs that have NOTHING to do with the story.

And because the game is set up as present/past, you have to visit all these places TWICE! Once in the past, to presumably fix stuff; then, again in the present to fix more stuff or just to talk to the NPCs hanging around.

During these backtracking times, however, you will feel your actual life slipping from the various orifices of your body. You will also begin to feel existential dread, as you realize that you’re gonna die one day and you spent precious hours playing this steaming pile of mediocrity. So…be prepared, I guess?

But It’s Worth It, Right?

The endgame stuff (the last five-ten hours) is fairly fun. The problem is that you have to slog through sixty+ hours of not-fun game to get there. Time and time again I found myself putting the game away because of the poor pacing. Just as the story seems like it’s it about to get good, you’re forced to spend hours running around and talking to people. Even just spamming the A button and ignoring the text doesn’t help much.

I didn’t put the game away for good, though. I had made a very public declaration that I was going to play through–and beat!–every Dragon Quest game this year, and I didn’t want to face the public shaming that came with failing my quest so early.

If you haven’t made such a public and foolish declaration, then I highly suggest never touching this game. Seriously. No matter how much I wanted to like it, I just couldn’t.

I don’t mind so-called “dumb kid stuff.” I really don’t. In fact, I tend to love it. People have brushed off Legend of Zelda: Twilight Princess because the early parts of that game feels like “dumb kid stuff.” Guess what? It’s one of my favorite games in the series. People have also complained about the kiddies in Final Fantasy IX (that is my favorite entry in that series too, btw). Wanna brush off Ni No Kuni games as being “dumb kid stuff?” I WILL SEND MY HIGGLEDIES TO CUT YOU!

Dragon Quest VII has its share of “dumb kid stuff.” And this is the one time that it actually made me like the game less. Mostly, this is because the kid characters are so unlikeable.

Kiefer is a pretentious, obnoxious, and spoiled prince. I spent a long time hating him, and by the time he was starting to grow on me, he vanishes from the story for a LOOOOOOONG time. Maribel might make one heck of a Sage and Druid, but she’s a whiney, know-it-all brat who goes through almost zero character development. The main character is also a kid, and although he has no personality whatsoever, everyone in the game talks down to you because you’re a little kid.

So, if you want to spend dozens of hours running childish errands for grown-ups who won’t really reward you for the trouble, then by all means play this game.

Let’s Wrap This Up…

This post is really long, especially considering the topic of “This Game is Bad,” but I’m trying to voice why I didn’t like this game. I wanted to. Heck, I should have liked it! But, the pacing and characters really ruined it for me. If this game had been 30 hours, instead of 60+, then maybe it wouldn’t have been so bad. But that’s part of the problem. This game is long for no reason at all. I don’t mind long games–I love them, actually–but only when the game has a reason to be long (see: Xenoblade Chronicles 2 for a great example).

Next week, I plan on talking about the few things I enjoyed in this game. Fair warning, though: it’s not a lot.

It makes me sad to have found a Dragon Quest game that I didn’t enjoy. But…here we are. It was bound to happen eventually.