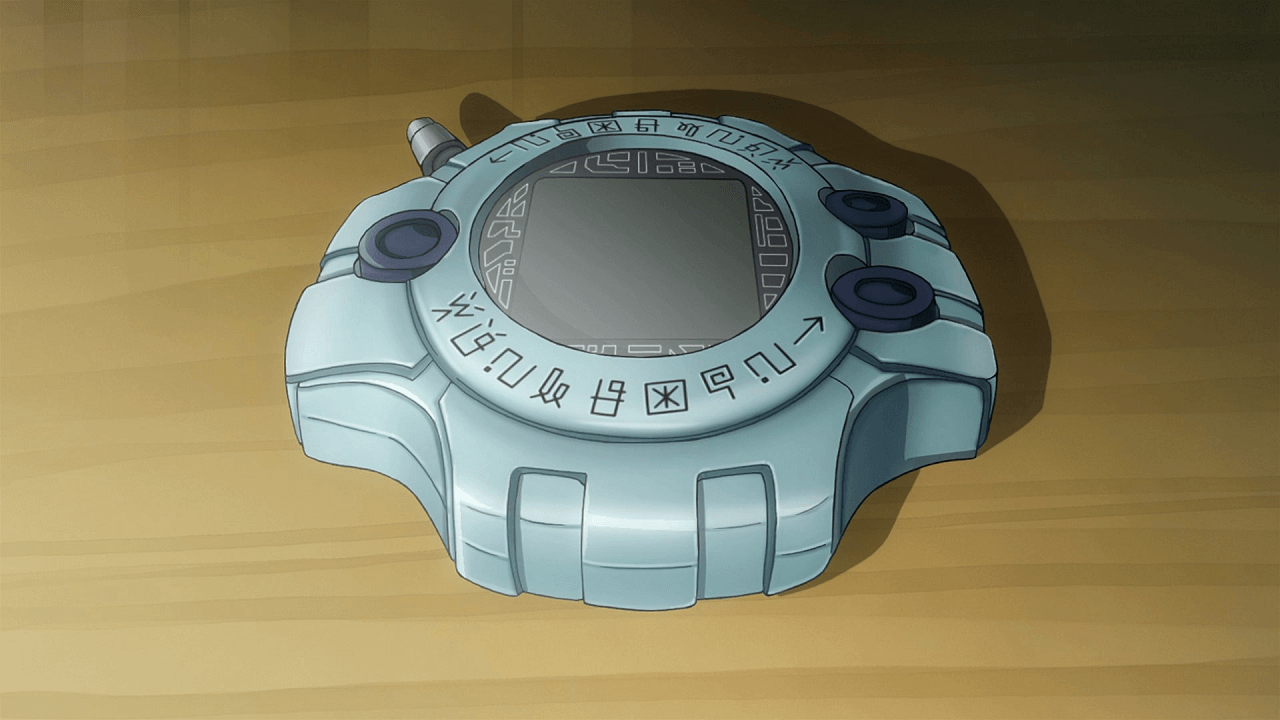 One of the worst things about anime is, funnily enough, also one of its greatest strengths: on a whole, the writing tends to wear its heart on its sleeve.

It enables everything from bombastic action-adventures to hyper-sappy melodramas to sitcoms that are very enthusiastically about hobbyist calligraphy. And, of course, this primes anime and manga to unapologetically embrace the bizarre. A key example: that flood of turn-of-the-millennium shows collectively summarized as “fighting monsters, but themed around this concept”. In theory, this sounds narrow and repetitive; in practice, this narrow subgenre was everywhere, and never really died out. (Not surprisingly, it’s also a signature trick of the crazy-popular Kamen Rider and Power Rangers/Super Sentai series).

As an aside: I’ll go to bat for Pokémon every single time as undisputed king of the monster-catching mountain, but it sure didn’t have the rootin-tootin frankfurter known as Hot Doggone-It.

Given that these series (and their merchandise) were laser-aimed at kids, they usually peddled some soft Aesop around “teamwork” or “friendship”. You’re not completing a collection, you see, you’re making all the friends. It’s a hokey thing to build a franchise on, to be sure. But I don’t believe that a single one of them executed on it half as well as the 1999 Digimon Adventure anime (surprising nobody who read the page title).

For one, the show didn’t exactly play the monster-collecting format straight – it was, critically, a monster-partner series. The show laid out its protagonists on page one, gave each exactly one best-friend-forever fantasy creature, and they stuck to that from beginning to end. After all, breaking the “one-monster-per-child” policy would cause an already-huge cast of fourteen to become immediately unmanageable. Keeping it in place provides a static enough cast that the show can get its tension from throwing different combinations together under different kinds of pressure. Which is exactly what they did.

One of the smarter plays that Digimon Adventure made was never truly putting its villains in focus. It would be too difficult to make them feel like a threat under normal circumstances with seven protagonists on hand. Just ask any Dungeon Master who’s had to balance encounters against eight players (sorry, Nick!). The internal logic was a bit wishy-washy for any given antagonist to distinguish themselves beyond “monster of the week”, anyway. So, instead, the series pulled out a different role-playing trick:

Sometimes this happened in literal ways: it puts the cast put into “odd couple” scenarios, like sticking cool-kid Matt with the perpetually-anxious Joe, or trapping the chirpy Mimi in a labyrinth with the stuck-in-his-own-head Izzy. But more often – and the really dangerous option – is in splitting the kids off from the Digimon themselves. That’s not so much in a “can’t beat the villain without the MacGuffin” way, though that is the plot-mandated excuse. Rather, it’s because they act as a mutual support system.

These kids are ten years old, so of course they pretty much defeat themselves when left to their own devices. They openly bicker among themselves and fall to pieces without any meddling given half the chance. The challenge to beat this week isn’t really the big ogre over yonder; it’s that Sora doesn’t trust Tai right now, so neither is contributing worth a quarter of a darn. When the leader starts pushing his partner monster too hard, it literally backfires and scatters the cast to eight corners of the world for a whole story arc.

The only thing that keeps the cast from fighting like the children they are is that, no matter how aggressively these kids muck things up, the Digimon stand as moral support systems above and beyond their action roles. They come out and voice the Kirk whenever their partner has gone too far Spock, or vice versa. They’re honest with their partners when they’ve crossed a line, and are patient until they’ve crossed back over it. Rather than the kids keeping their monsters, it’s more the other way round. It all comes back to a sense of camaraderie taking focus over an antagonist who’ll likely never show up again.

But this is, of course, overly-optimistic material aimed at the seven-to-eleven bracket. What happens when you age the show up?

Adventure 02 (the actual title of the second season, I swear) mostly puts the original cast in the background as mentors to the new. They’re already perfectly capable, and so are inherently less interesting than the new, more condensed cast of characters. Their character development was more outward-reaching: they talked their antagonists into becoming allies over the course of their character arcs, and a set of globe-trotting episodes was about building connections with other monster-partners in other countries. This was a heavily digital-information-flavored series airing in 2001 – the parallel to internet forums wasn’t exactly hard to read. It’s a similar attitude, but put in a wider frame.

The recent tri. (season three – naming isn’t the series’ strong suit) picks up six years later in-universe and sixteen out-of-universe. Naturally, the group has drifted apart and the audience has outgrown the Saturday-morning version of “friendship good”. So the show refocuses again around those new aspects of the same themes.

Teenagers are old enough to have problems that resist being solved in one episode: having conflicting priorities or feeling like they’re unneeded within the friend group, being forced to part ways due to circumstance, and critically having to choose when to cut potentially toxic friends out of their life. Even the two otherwise-capable adults prove functionally useless for how hung up they get on chasing irreparable relationships. They’re hard problems that the show can’t – and doesn’t try to – come up with direct solutions for. Instead, it leaves us with the implicit urge to hold desperately onto our sources of emotional strength.

Putting it in Practice

And then there’s the case of Koji Wada.

While the series’ musical personality in The States has been a mix of frustratingly-catchy theme tunes, pop, rock, and ska punk, back overseas musician Koji Wada had put out the opening theme music for seven-out-of-seven seasons of the show over two decades. He was and is functionally part of the series’ identity. But by the time Digimon Adventure tri. was under production, continuing what he helped kick off, Wada was already diagnosed twice over with cancer. As much as he jumped on the chance to contribute, the reality was that he probably wouldn’t see the production through to its finish.

So he didn’t return alone.

Over the end credits of the last episode, tri’s two other key musicians and all nine of the series’ main actors singing in-character – that is, every key voice in the show – join Wada’s performance, taking in turns the theme song that the show has been using since 1999. He’s effectively being carried across the finish line by those he’s been working with for fifteen years.

It’s hardly uncommon for series to fudge the fourth wall and have title music be performed in-character by its cast. As you might imagine, there’s an awful lot of overlap in the venn diagram of “vocal musicians” and “voice actors”. It’s anything from cute and harmless to absolutely hokey. But here, it’s so consistent with the series’ values that it feels like a delightfully in-tune way of closing out Wada’s career with the series.

So with the original series taking an idealistic outlook on companionship and tri. letting it reflect less certainty, where does that leave the series going forward? A return to overt optimism seems a bit tone-deaf given the series’ ever-aging protagonists, but departing too far could feel disingenuous. Next year’s film literally has “Last” in the title; maybe it could explore more graceful ways of parting, in a deeper way than just a last-episode melancholy has the space to do.

Or it could be anything in between, like how people can grow physically apart but still “stick together” – especially now that the timeline sets the film in a year where instant messaging and social media are the norm. Maybe we’ll finally see the series puts its core themes and “digital world” flavor together into one box. I’d love to see a series with a positive outlook on the connective power of social media for once.

But wherever it goes, I’m right there together with it.