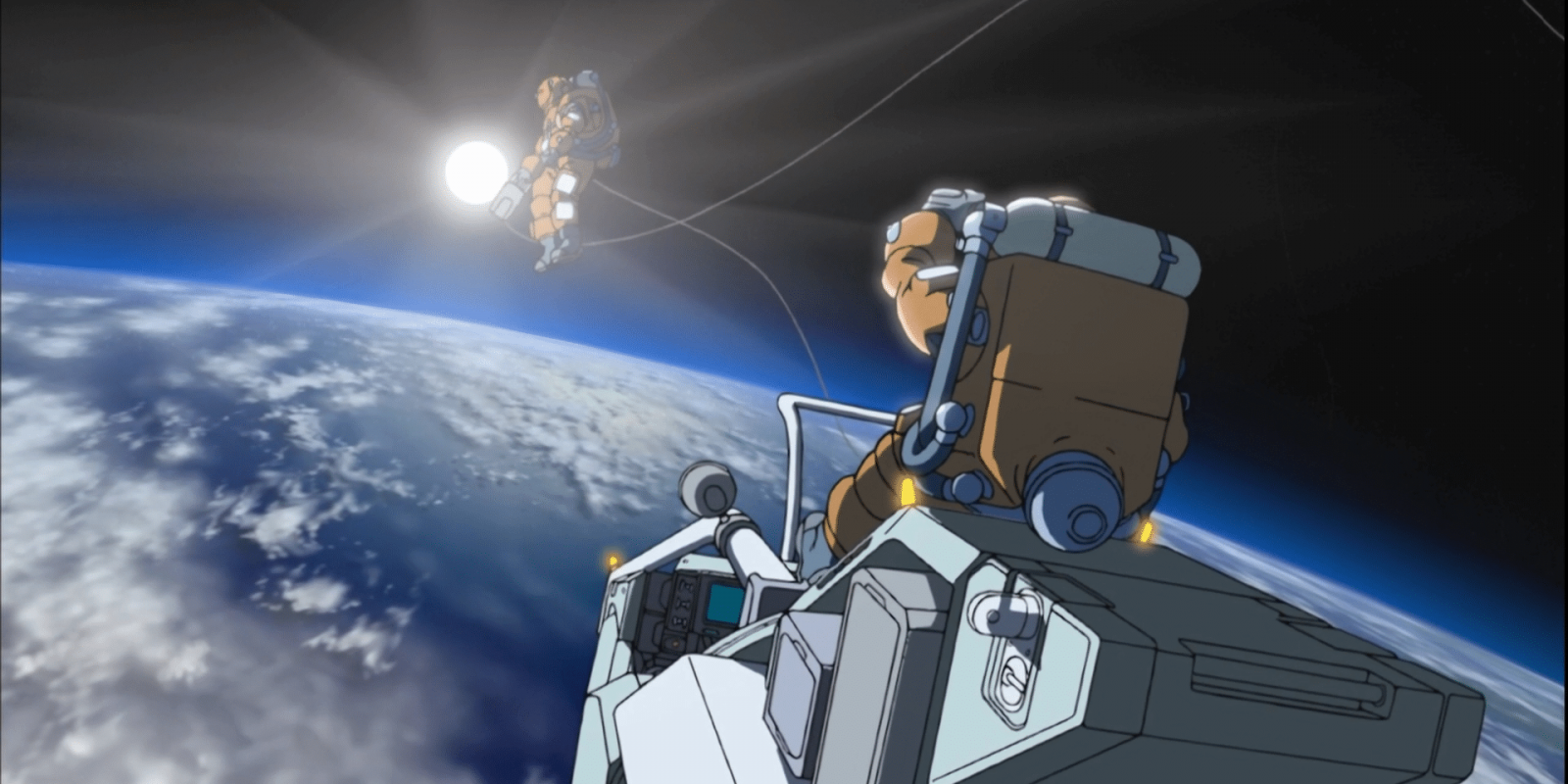 Planetes is available from your local library or independent bookseller. The anime is not currently available for streaming.

Science fiction thrives in anthologies. Pick any of the “classics” from a hat – Star Trek, The Dandelion Girl, Asimov’s I, Robot – and there’s a better-than-even chance that a story doesn’t take longer than fifty pages or forty-two minutes to tell.

It can feel oddly archaic now, given how every new straight-to-streaming series and movie seems serialized. Each “episode” is one slice of a thirteen-hour slice; the movies all end in into some bigger, over-arching story. Which, to be clear, is great – I look forward to watching Daredevil debate She-Hulk on TV as much as the next guy. But there’s a lot to be said for how a tight, focused episode can really drill down on a single idea.

And precious few series wield the strengths of both quite as well as Planetes.

Planetes is what a sufficiently-nerdy nerd might call “mundane science fiction” : stories that carry the inward-looking, humanitarian soul of science fiction, but set themselves in a world that looks barely different than our own. Think of urban fantasy, but replace back-alley witchcraft with 3D-printed vaccines.

Side note: if you’re picking a moniker for your new literary movement, “mundane” is a humdinger of a banner to fly under.

And I can hardly blame anyone for throwing Planetes under that label. Not because it’s boring; because the manga may very well be one of the most realistic depictions of fictional space travel that I’ve seen. And the beating heart of that realism?

It vision of 2070 is remarkably unambitious.

Which sounds more than a bit pejorative, right? Of all the things for a story about space exploration to be, we usually expect “ambitious” to top the list.

But that relative resignation feels honest. In Makoto Yukimura’s 2070 – as penned in 1999 – we’ve yet to seriously breach the main asteroid belt. A full century after the first moon landing, and we’re lucky to have a strictly-business outpost there. And, given the current arc of history, it’s pretty easy to envision the seventies coming back around with global spaceflight in a similar position.

In the case of Planetes, it doesn’t help that its main crew spends so much time doing the least glamorous part of engineering:

Hard to be starry-eyed about a spacewalk when you’re doing it to literally pick up trash.

As Below, So Above

For a series about spaceflight – and whose characters largely live in Earth’s sky – it feels remarkably grounded at times. Which isn’t to say that it doesn’t talk in lofty circles or feature a sequence where Captain Fee, almost Daffy-Duck-like, spends an afternoon sprinting across the moon trying to find the one spot she’s allowed to have a smoke. More that all of those are firmly rooted in sentiment:

Being up in space doesn’t mean we’ve escaped Earthly problems, by any means. It just means we’ve given ourselves different ones.

And that’s the core of what makes mid-19th-century science fiction tick, right? Those old periodicals were flush with hypothetical stories containing alien artifacts and artificially-intelligent robots. But those always have to start from somewhere much less hypothetical. The ethics of creation. Self-reliance and obligation. The human cost of human progress.

The same old topics we’ve always wrestling with, just viewed with a bit more distance and a different lens.

And Yukimura feels dead set on the last of these. Planetes‘ whole conceit lies in how charging upward leaves rubble in our wake, fatal to those who might try to follow. For every person on the rocket up and out, dozens are stuck watching from the ground. And, of course, all of that presupposes that going skyward in the first place is altruistic (which, wouldn’t ya know it, isn’t always the case).

Each of which takes a turn under the lens. Private space exploration thrusts its careless thumb in the pie. Those staying behind have to watch those leaving practically rip themselves apart. Space-scale projects have their own web of offshoot problems.

But Planetes doesn’t stay concerned with that.

It’s right there when the crew of Planetes’ Toy Box come back down to earth, both figuratively and literally, seemingly not much wiser. On the clock, they’re trying to figure things out as environmentalists challenge expansion. Off the clock, they’re tying to figure things out as their families nag them for spending years away at a time. Through a lot of little stories but far fewer concrete conclusions. Probably brought back a nervous condition for good measure.

But back down on Earth is really the place where things feel right, to scale. Up in space, everyone is either too-cramped in their compact quarters or too-tiny in setting that blasts them out of proportion. Visually on the page, metaphorically as cogs in the slowly-grinding, mechanical space-exploration workforce. Take your pick.

And, to its credit, Planetes does use linear storytelling to really draw this out. One real stab at aiming up into that infinite horizon; a long, arduous effort that ends our leading character more-or-less near where he started.

Not that it stops him from shooting his shot.

Not that it stops any of us, really.

It’s one of my favorite things about anime and manga as a whole, really: their tendency toward relentless optimism. That is to say, I love Planetes for the same reason that The Next Generation will always be my favorite Star Trek. Despite the bells and whistles of advancing technology, they’re humanist above and before all else.

And for how much we champion Picard, and for how aggressively Planetes‘ Hachimaki guns for a shot on the prestigious to Jupiter, that’s what keeps keeps them grounded millions of miles from Earth. Great Man Theory falls apart when pitted against the Blue Marble. Up there, it’s just human theory keeping things together.