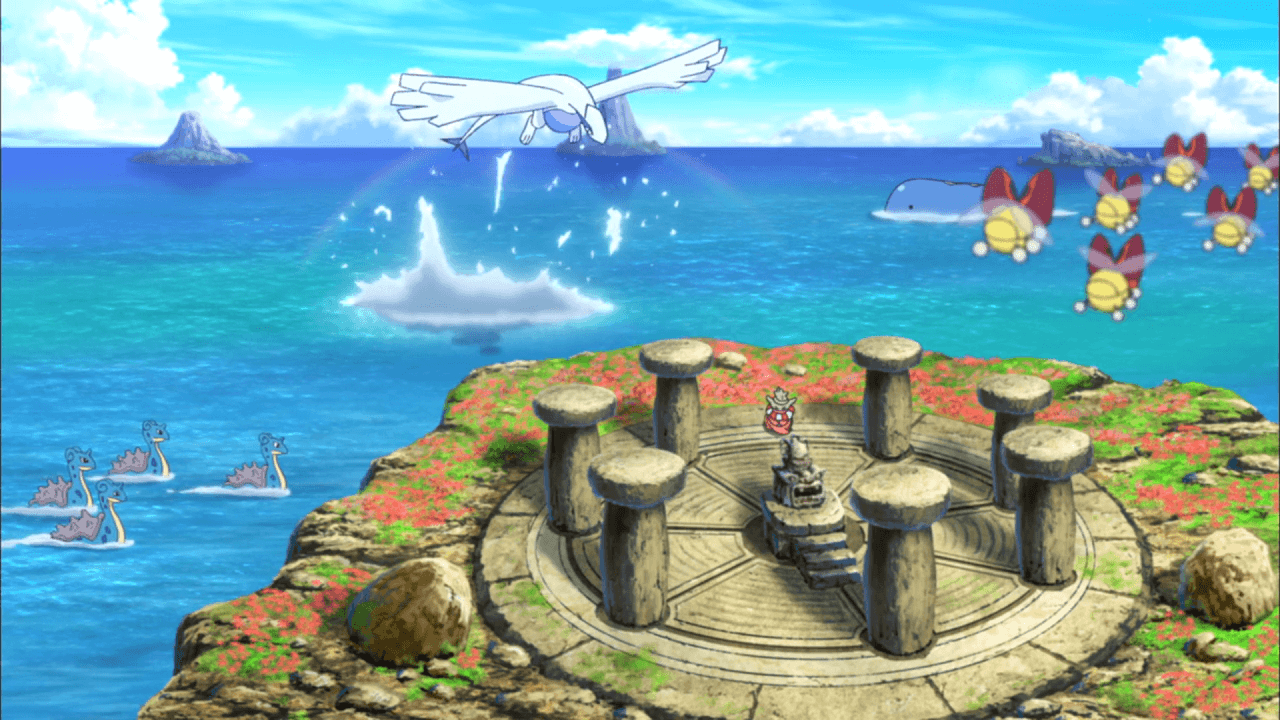 [Keywords] Pokémon and The Drawing Board

I go by Data_Error around the network and in other formats – Twitter, Discord, and right outside your window.

(Heheh, made you look. Possibly.)

I love pulling apart the media I consume and guessing at what makes it tick. And you know what wears its heart on its sleeve, making it easy pickings? Anime. I aim to explore a lot of that here – maybe even some video games in due time. I hope you’ll read along with me.

The Pokémon TV series is available for streaming on Netflix, Hulu, the official Pokémon website, and a half-dozen other places.

I’m a long-time fan of the Pokémon franchise as an idea. It’s altogether wholesome and bright – hokey to a fault – and it’s available across a billion different formats. It’s present across video games, card games, oodles of merchandise, and one of the longest-running animated series still being produced. There’s been an episode dang near every week for the last twenty-three years, can you believe it.

But one major problem with long-running series: that they have a nasty tendency to get either long-winded, repetitive, or both. Especially with a series as brand-conscious as Pokémon, there’s pressure to air something new every week just for visibility’s sake. This paradoxically traps the series inside its own formula at times where it ought to have space to explore. Template-breaking writing is a secondary investment compared to keeping the production’s figurative head above water, after all.

Side note: Anime series tend to have pretty long credits sequences for half-hour shows. Pokémon in particular piled regular “PokéRap” and “Who’s That Pokémon” spots on top of that. The likely reason? Efficiency. Every second of that is re-usable material, i.e. time that the animators don’t have to fill with new drawings every single week.

One of Pokémon’s long-standing bugbears is that, for how it regularly emphasizes worldbuilding and the day-to-day coexistence of super-monsters with squishy humans, it nonetheless repeatedly sticks the camera behind a ten-year-old cross-country backpacker with a competitive streak. To its credit, the show does have some great from-whole-cloth episodes. Some real heartfelt ones even address topics like abandonment or the troubles in adjusting to domestication. Sadly, these were few and front-loaded, with cookie-cutter “Team Rocket’s kidnapping schemes” stories handily outnumbering them as time went on. RPG-style battles aren’t a requirement for a TV script, it sure makes for an easy-to-follow format.

The show tried at various antidotes to the formula over the years. One-off specials like Chronicles let it shift all across the setting to briefly tell original stories, not always about trainers. Occasional mix-ups tried ideas like turning the ever-ineffectual Team Rocket into something of an organized, credible threat. That is, until it became apparent that lovable buffoons make for better dialogue than proper villains.

So just as the show turned old enough to drive, it went and picked up one of its very best habits.

Going Back to the Drawing Board

At the same time that the games made a sea change toward 3D, the series following X&Y made a matching shift toward heavier use of digital effects (including mock-3D-camera work) to get more mileage and pizzazz out of its hand-drawn animation. And while the plot finally started to break its holding pattern – sometimes actively putting the game-adjacent plot on hold for an original side-story – on the whole it still mostly followed the “collect eight badges” song-and-dance.

What really caught eyeballs was how the show visually retooled itself with the seasons based on Sun & Moon. Aside from the characters being noticeably redesigned into something more elastic and cartoony, the stories shifted even further away from those in the games were doing. Instead, it provided a feed of more focused anecdotes with a consistent core cast of characters. In a lot of ways, it felt like the series became aware of its own formula and made a pivot toward more unique, day-to-day stories like “Pokémon playing baseball” or “trapped inside a living sand castle”. 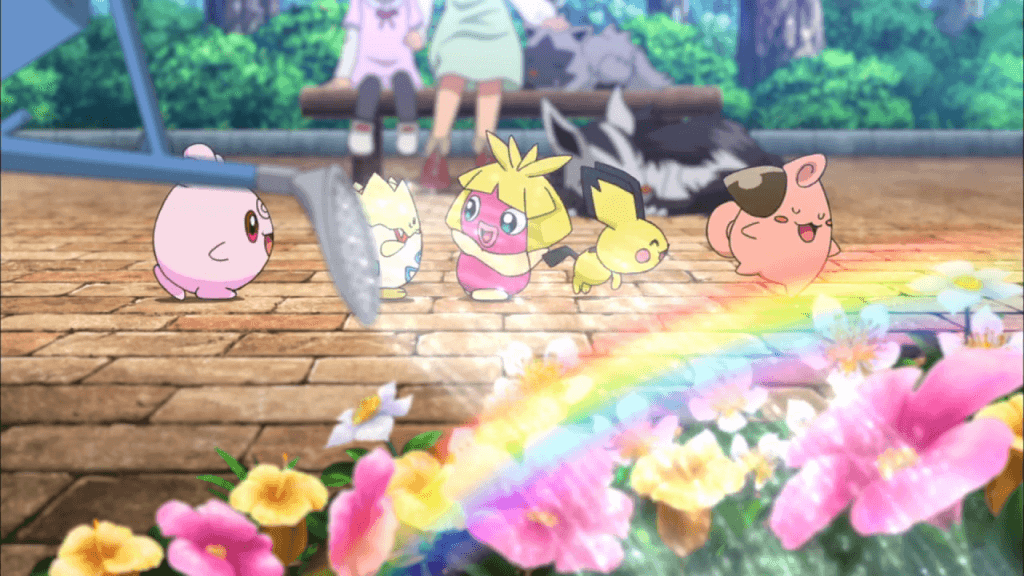 It did put some people off, but it opened a lot of doors at the same time. Particularly, its simpler characters were magnitudes more malleable and expressive – all the easier to show off the monsters’ inherent appeal in every scene instead of just during high-stakes action. Who needs realism in their fantasy-monster-catching series, anyway?

Not that the show abandoned the games’ battles, of course – rather, it had enough leeway now to turn every one into a visual showcase rather than a once-per-episode obligation. Even the once-per-summer movies took this opportunity to pay even further with their aesthetics. Oddly enough for shown-in-theaters features, they re-interpreted the series into adventures that didn’t even necessarily have central antagonists to fight with.

Even then, the Sun & Moon anime was still a function of the core games – the former is named after the latter, after all, they share a cast of characters, and elements like the games’ trials still serve as waypoints. Even recent “breaks” from the formula like Generations and Origins underscore this in their own way, existing solely to adapt specific scenes from the games.

It’s how Pokémon has operated for decades, after all. Historically, everything about the franchise, from the action figures on display to its ongoing manga series, is positioned around the most-recently-released “core” games. Their setting and their new crop of monsters very visibly dominate the whole brand for three years like clockwork until the next major releases. It’s not even an uncommon mindset – tons of shows are made with the goal of promoting sales of the novel or phone game that they’re adapted from.

But that just makes less sense for Pokémon in 2019, now that Go has blown up into a mega-popular success. A huge chunk of the potential audience is more in-tune with Go‘s raid schedule than the imminent Switch release. So if the brand centers on Sword & Shield content in the same way that they’ve always followed the contemporary games, it potentially loses a massive but less-heavily-invested audience. Follow Go, and not only is there less of a setting to build a framework from, but long-time fans will likely accuse the producers of breaking form to chase a fad. It’s just what we fans tend to do.

So the show, for a third major time, went back to the drawing board.

And, rather than directly serve either Go or Sword & Shield, it’ll take another option altogether.

It’ll seemingly adapt every game at once – or rather, the franchise as a whole.

The World is our Cloyster

In a sense, it’s going “back to basics” by focusing on a pair of traveling trainers – the series’ tried-and-true comfort zone. It’s certainly more familiar than Sun & Moon‘s school setting taking after some four-fifths of modern anime. But at the same time, it doesn’t feel like it’s following quite the same direction as past series and their country-trotting escapades.

The closest that the Sword & Shield branding gets to the new series is a single regular team member. Everything else seems deliberately even-handed, with the first eight episode titles alone touching on half of the series’ previous “generations” – the trailers even show an encounter that looks suspiciously like one of Go‘s raid battles. And the core cast being so small – just two humans so far – suggests that a lot of the focus will be elsewhere. Presumably that’s on making the strongest showcase of as many diverse elements of the series as possible. If its recent film outings are anything to go by, it may even aim to appeal without having to throw a single Thunder Punch half the time.

In short, the Pokémon anime looks to be lining up the TV-season equivalent of a Greatest Hits album.

Not that any of this is for sure, of course. The new series could be a haphazard mess just as easily as it might be a celebration of every creative asset the franchise has cooked up since 1996. Not having an apparent long-form structure or supporting cast to fall back on could leave the whole thing feeling flimsy. But a well-established franchise making that change in direction is so much more exciting.

Long-running series have a nasty habit of becoming slight-but-reliable machines. Current cash cow One Piece has hardly changed its outlook in as many years as Pokémon has been around. It’s a thinly-stretched weekly production with the same general presentation in 2019 that it had 1999. Surely that’s in no small part because it’s hamstrung as an adaptation to follow its source material beat for beat.

For a long time, Pokémon was the same. But now it seems to have finally broken free of those obligations. The new season has grabbed my attention after over a decade away, regardless of whether it’s a swing or a miss.

With its path wide open, I’m just excited to see where it’s headed. 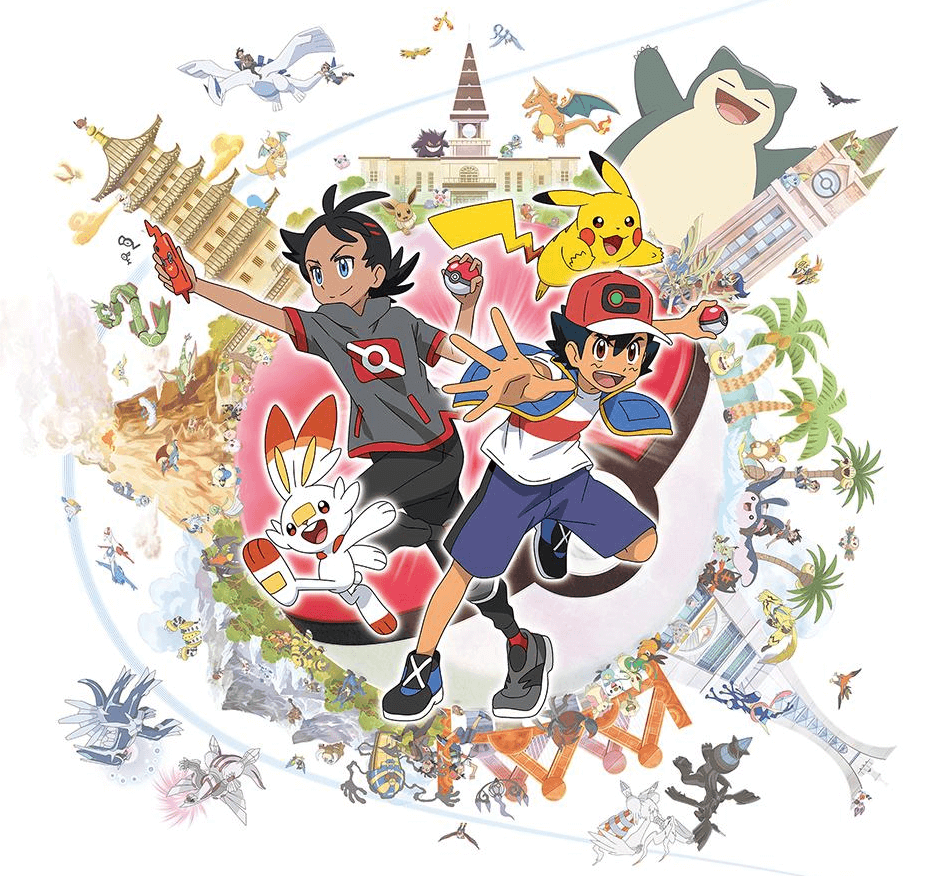 Heheheh, went that whole article without resorting to a “the series has evolved” gag.
Wait.
Dangit.