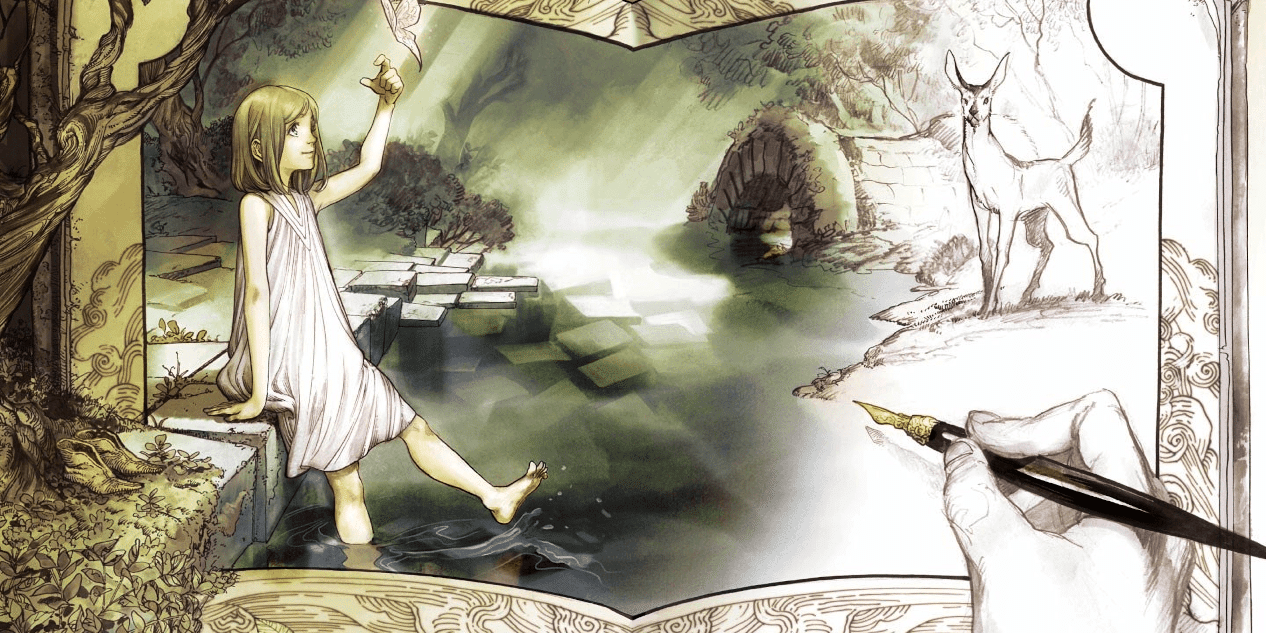 Witch Hat Atelier is available at your local bookseller.

One of the things we love to to with fiction is divvy it up into smaller and smaller categories until they get hyper-specific. Example: the three capitalism-critical space westerns that I can name off the top of my head.

Sometimes, it’s a useful compare-and-contrast exercise. “If you liked Thing X, you’ll probably like Thing Y” is a better bet the more specifically you can define each Thing.

Other times it’s just plain arbitrary, like splitting hairs over what does and doesn’t get labeled as a “JRPG” on Steam.

And then you have how “hard” a certain fantasy or science-fiction story is – that is, how well-defined and “realistic” its rules are. And everybody has a preference.

“Fairy-tale” stories with flashy spell-weaving feel like empty flights of fancy to some, and a comfort and delight to others. Darker fantasy stories can read as dour and depressing, or bring with them a sense of weight and impact.

Get you a magician who can do both.

Witch Hat Atelier, from first appearances, looks like a series stuffed with fluff and good vibes. I mean, just look at the main cast. They’re, like, twelve at best.

And that’s not really wrong. Witch Hat Atelier ultimately maintains a doggedly positive outlook, unafraid to make loving, starry eyes at the marvelous truth that there’s actual honest-to goodness magic in this world, can you believe it?! That kind of pure joy radiates energy through the page and keeps even its most horrible moments from feeling overwhelming.

But, in case the frankly ridiculous level of detail in author Kamome Shirahama’s illustrations doesn’t give it away, the series doesn’t get there through the light and dreamy flick of a wand.

The magic in Witch Hat Atelier is so enchanting because its medium of casting – crafted illustrations – feels tactile.

Take this elegantly-composed supplement from the first book. In less than ten sentences, it:

This appears after chapter five, and from it I already felt like I could deconstruct any spell the series would ever conceive, then scribe some of my own. Not because I can recite faux-Latin, but because I’ve taken a sixth-grade geometry class.

It’s simple and elegant and feels oh-so-satisfyingly robust as a result.

There’s space for different “casters” to have different specialties rooted in practical skills: main character Coco learned her notably-exact linework from tailoring, and other students benefit from a knack for maximizing space or quick sketching.

With a well-defined structure in place, new elements can be folded in seamlessly without upturning the existing ones.

And, best of all, it plays into one of the series’ core tenants:

With enough ingenuity, some study, and basic tools,

Magic is For Everyone

It’s not an inherent skill or a divine power.

It’s a concrete thing that you can know how to create, and that feels distinctly real and believable because you can literally write it on a page.

The only “trick” is a matter of externalizing your own imagination.

Apply that as a thuddingly-obvious metaphor for whatever hobby or skill you like.

…but here’s the point where I have to add a huge asterisk around the series’ gatekeeping. How even simple magic is still a guarded secret, and that not everyone can be allowed to draw spell-glyphs because what if they do something dangerous. People abused it in the past, so all the magicians took their ball and went home so only their bestest friends can play now.

And, to its credit, it shows an awareness within the first dozen chapters how that creates an super-bigoted and inward-facing community. Yes, even when it’s couched in the genuine interest of safety. The story’s long arc is slowly, by a hundred tiny cuts, turning against exclusionary behavior. It still hasn’t gotten there yet.

But it’s a matter of time.

The great thing about concrete systems is that by definition anyone can engage with them. Sure, there’s one necessary spell component and a bit of practice involved, but step over that knee-high hurdle and the world bursts open.

From the very first chapter, we see a girl breach that bubble huddled in her own bedroom, sketching marks on spare leaflets from a used book.

That’s a quarter-push at best before the way to magic is split wide open, for everyone.

One of my absolute favorite aspects of anime and manga is that their stories tend to wear their hearts on their sleeves.

Oftentimes, that means throwing rules away in the interest of what would be more fun, or cool, or empowering.

But it doesn’t have to.

Sometimes, hard-and-fast rules can bring empowerment or create delight. Rules may constrain, but they also create something solid and real to hang onto. And from there, everyone can climb.

After all, the magic that you can reach out and grab for yourself is often the most captivating.