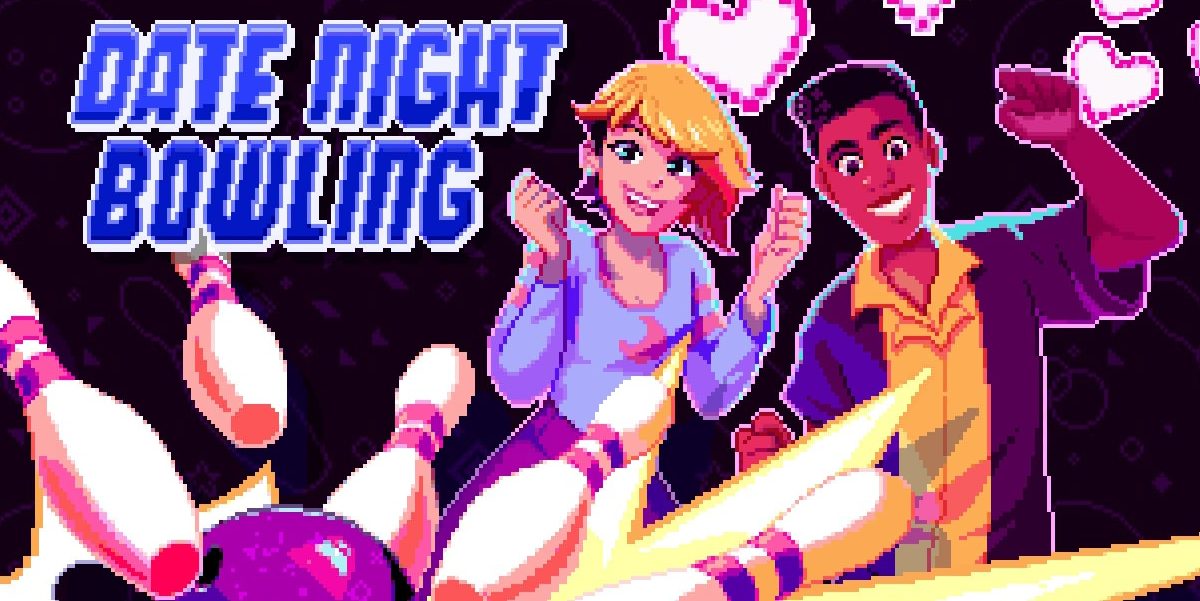 A code for this game was provided by Serenity Forge & Way Down Deep.

I haven’t been bowling in probably five years. In fact, I haven’t been out much in general for the last two. It’s become a bit of a “special occasion” thing, but that means I can tend to miss it.

So, of course I’d jump at a charming bowling game.

And Date Night Bowling is… exactly that. Its pixel-art presentation is surprisingly rich and detailed for how closely it sticks to its retro-ish style. It even comes with a cheeky CRT filter to match, which I couldn’t bring myself to turn off. Plus, for its static visual-novel-style character portraits, the pins make a satisfyingly vigorous show of spinning and tossing about when you hit them.

In short, it feels nice and arcadey. Position your character, aim the ball, and time your throw to keep your power and spin under control. Video-game bowling has something of a tried and true formula to it, but that doesn’t make it feel less fun to tinker with your shots or play just one more frame.

And that’s the thing – Date Night Bowling doesn’t seem overly concerned with deep, competitive bowling simulation. You can technically fiddle with settings for your characters’ throwing hand, the ball’s weight, and even how well-oiled the lane is. But if they have much of an affect on gameplay, the game itself never says so – and I personally didn’t notice. Ultimately, the game just wants to let you loose to play bowling.

And then to make good on the other half of its title.

Date Night Bowling takes a more playful approach to its “dating game” element than, say, a narrative-heavy RPG. You don’t really choose from a list of dialogue options, and the setting is too constrained to pursue a character down any particular story path.

Instead, you spend your downtime between bowling frames by doing other little activities themed around the bowling alley. You try to give your partner a high-five while they playfully try to psych you out. Sing along (badly, in my case) to the music playing over the speakers. Chat about food and work. You exercise your characters’ chemistry by, you know, hanging out.

All in the form of everybody’s favorite video game diversion: the minigame.

Its wide stable of minigames can stride the fine line between Mario Party toys and WarioWare fare, though. With a one-line explanation and no time to practice, sometimes I’d stumble to a failure while still trying to wrap my head around the objective. And with no “Minigames-Only” mode, I feel like I’ll be dropping the ball on karaoke for as long as I keep playing.

Still, most of them are straightforward enough, and having something new to do every minute or two helps break up the core loop of the game. Bowling is simple, but that lets your mind wander toward other things. How could my spot-polishing technique have been better? Is there enough time left in the game to still make a good impression?

All of this is in service of an admittedly-simple “Connection Gauge” – basically, if do mostly well on most of your minigame attempts, your chosen characters remark that they had a fun evening. Maybe they exchange numbers. It’s not much, and you can’t really follow up on it with a second date, but just that bit of playful flavor can go a long way to keep a player engaged beyond the bowling itself.

There are also no restrictions whatsoever on what characters can pair off with each other. Matchmake the chemist and the gentleman? Why not! Wanna set the two hyper-competitive dudes against each other? It’s a date! There’s a healthy amount of variety inside of just ten characters, and there’s fun to be had tossing them at each other to watch their unique interactions.

It’s a shame that these characters are only “unlocked” through a solo-bowling mode, each time ending with an admission that this probably isn’t what you came to Date Night Bowling to do.

I think the intent here is to learn about each character in isolation before pairing them off for bowling dates. But I’d argue that’s part of the point of a date in the first place, to learn about the other person – and the quick-hit ‘Bio” on the character select screen gets you most of the way there, anyway. Ultimately, there’s a reason why most fighting games have done away with unlockable characters; it just makes for a slow start to the night.

With 28 unique pairings, Date Night Bowling is dense in its unique dialogue once you get rolling. Editor Holland and Nerdy Nora are old friends, for example, and playing the two together feels like a chummy night out. Vlogger Sadie quickly figures out to push Cool Kid Zack’s buttons, though, and the poor chap plays every conversation on defense.

But there are some misses. For example, I had a character tell me “I think you’re getting better!” on the very first throw of a game. And each character has a “mantra” that they say to themselves before every round, which gets awfully repetitive by the eighth frame. It’s mostly little things, unsurprising for mix-and-match dialogue, but the occasional snag stands out after half a session of smooth running.

The best compliment I can pay to Date Night Bowling is that I’m probably going to go back and play a round after writing this.

If you look at it hard enough, you’ll likely find a few hiccups. It’s admittedly a bit lean, with all its “progression” front-loaded and it somehow having both too much and not enough variety. But it knows exactly what it is: a solid bit of light bowling jazzed up by charming characters and the occasional diversion. That certainly hit the spot for me, and I imagine it’s enough to feel novel when you can pull in a second player for something a bit different.

Sometimes, you don’t need to overthink it. Just go head out to the alley and have yourself a time. And hey, if it’s with somebody you take a shine to, all the better.