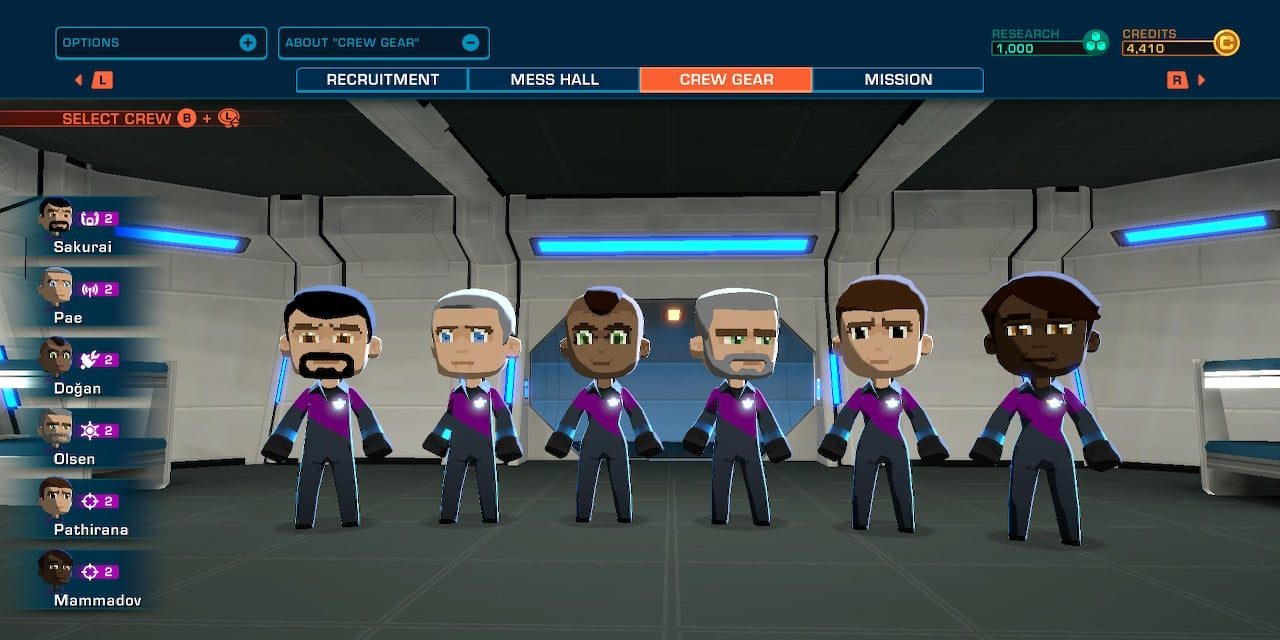 A code for this game was provided by Curve Digital

It’s Not Star Trek, Despite The Uniforms

I was sold on Space Crew, a cartoony strategic starship sim, the moment I saw the knock-off Jean Luc-Picard character on its cover art. This game is a follow-up to 2017’s Bomber Crew, a game that never enticed me because the same cartoony style without a Star Trek reference didn’t do it for me. But now that I’ve spent some time with the sci-fi follow up, I wish I’d checked in on what developer Runner Duck was doing earlier.

From the very beginning, Space Crew starts throwing Sci-Fi tropes at you hard and fast, with a ship taking off from a command center orbiting the earth in order to repair a communications array near the moon. It’d be silly to pretend that this game wasn’t making overt references to Star Trek, as the main station looks suspiciously similar to Earth Space-Dock. These references helped a geek like me, who came into this dense strategy game for the aesthetic, feel right at home. This was really nice, since the gameplay got overwhelming really quick.

Your main view in this game is a top-down X-ray of the interior of a Starship, with a team of six characters with unique skills working at unique stations. The crew is made up of two weapons specialists who are perpetually sitting in two of the ship’s four turrets, a security officer who can boost shields from his station when he’s not manning another turret, a Communications officer who scans for enemy ships and can call in a flight of fighters to support you, and, of course, a captain who pilots the ship.

This smaller crew echoes the ragtag group from Star Trek: Picard more than the hundreds of officers that populate most of Starfleet’s ships, but just managing those six in the midst of a firefight is plenty chaotic!

Now That You’ve Got Your Space Crew, What Are You Going To Space Do With Them?

I’m only a few missions in so far, but I think I’m starting to get a pretty good feel for the general loop of the game. You always start at Athena Station, where you can train your crew in new abilities with experience points that they gain from completed missions. You can also change the look and stats of your crew members and ship with unlocks you get as you play. Also, you can recruit new crew members when a red-shirt inevitably goes to the big Spacedock in the sky.

Once you’re all kitted out, you can choose a mission or bounty to pursue. I haven’t actually unlocked the bounties yet, so I’m not sure how they work, but the missions generally give you a bit of flavor text telling you where you are going and why, and then you jump through a sequence of jump gates, battling enemy ships along the way until you achieve whatever generic objective you’ve been given and head home. The biggest choice you’ll make as you work through the mission is which path through the gates you take, with indicators for “fastest” vs “safest” routes.

The moment to moment gameplay on the missions involves using a giant reticle to highlight whatever you want your crew to focus on (the next jump gate you need to reach or incoming enemy fighters), and then selecting individual crew members to assign them to new stations or use unique abilities to keep your ship running smoothly. This all feels fantastic! And the game is really fun when you’re trying to shoot down incoming fighters while your oxygen generator is on fire and a squad of enemy combatants has boarded your ship. And it’s all on you to help your crew manage all of those crises at once.

From a gameplay perspective, the only real complaint is that the game seems hard. Like, really hard. Missions are sorted by low-risk, medium-risk, and high-risk. I’ve so far lost two ships to low-risk missions and one to a medium-risk mission. Granted, I’m a relative newbie to this sort of genre, so it may be that I’m still getting my sea space-legs, but I can’t even imagine what sort of pressure the high-risk missions would put on the player.

Unfortunately, the story hasn’t really done much to hook me in yet. The narrative seems to be exclusively delivered through the briefings on the mission select screens, and it doesn’t seem like there’s an ongoing plot so much as just a series of reasons to get your ship into scrapes.

Are You Ready to Join the Space Crew?

Space Crew has been a delight for me to dig into over the past few days and is definitely something I’m going to keep grinding through. The gameplay is remarkably smooth on the Switch considering how much you have to do, thanks to a clear interface that reminds you what button combs will open what menu. The chunky, cartoony visuals belie the chunky, intense strategic gameplay. The story hasn’t hooked me so far, but the fun of pretending I’m in command of my own Starfleet strike team is enough to let me look past that and focus on keeping as much of my crew alive as I can on each mission. Or, you know, keeping any of them alive.

Check out a recording of Troy’s first session playing Space Crew on his YouTube channel.