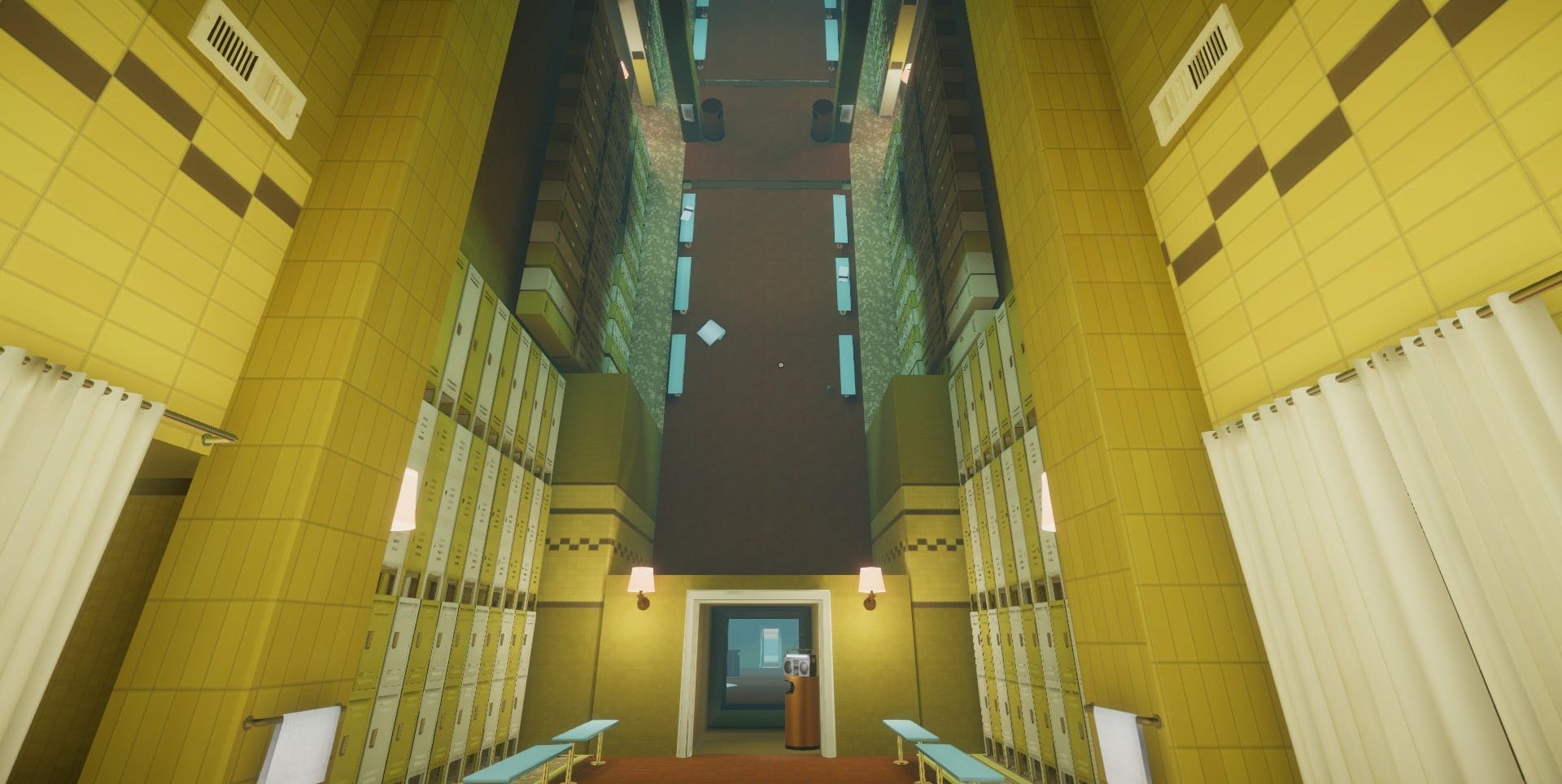 Puzzle games are almost inherently some of the most inventive games on the market. There are few tried-and-true “formulas” to follow in the same way as a AAA open-world-’em-up. Almost by definition they’re trying to stretch your brain in new directions. They’re just interesting buggers.

But the PC space in particular is flush with games that pride themselves on physics simulation. Some of the most distinctive games of the last two decades revolve around manipulating objects – and yourself – by bending the natural law of the world. They can still be just as unique, sure, but there’s more of a crowd to get lost in.

So, how does Superliminal distinguish itself?

The first thing Superliminal does is nail the basics of puzzling. Right off the bat, puzzles seem simple and intuitive. Usable objects are in primary colors, your cursor helpfully changes when highlighting one, and they broadly react with predictable physics. Certain puzzles are even made to “slide into place” with the genre equivalent of aim-assist. And all that is super-important to grounding the game’s central conceit:

Superliminal sells itself on being a game about “perspective”, but that’s just the core nugget. The game’s “hook”, for the unaware, is that objects are always exactly as large as they appear. The trick is that they can be grabbed from any distance, and maintain their size while they’re being held. This lets you use and abuse forced perspective – the trick behind those tourist-y “hold up the Tower of Pisa” photos. To wit:

…but the game goes much further than that. Without giving too much away, the game makes its fun with navigating non-linear space, manipulating your field of vision, and inviting you to step out-of-bounds. It’s a delightfully imaginative way of interacting with an world through a first-person view.

And if that sounds familiar… it certainly is.

Sometimes, that’s not a bad thing. If it ain’t broke, don’t fix it and all.

But Superliminal is so eager to stand alongside other physics-narrative-puzzle games that it tips its hand right away. Likely within your first fifteen minutes, you’re made captive to a gauntlet of test chambers. The illusion is immediately broken, and it’s all too clear where this train is headed:

It’s also oddly inconsistent with how it does and doesn’t carry concepts forward. Often, you can carry objects between rooms where you don’t need to. Technically this is harmless, but it being useful just once or twice trained me into typical slow-moving pack-rat behavior. On the other hand, I was certain one puzzle late in the game was building on the concept of manipulating space to shrink yourself. Instead, it wanted me to “take the third option”, so to speak, without much signposting.

It felt fantastic when I pulled it off, sure. But I’m not sure moving in circles for ten minutes of an otherwise-brisk experience was worth it.

That said, Superliminal doesn’t spend all of its time tripping over itself. In fact, most of my time in its gauntlet was fun and playful. Y’know, that thing that a lot of us go to games for.

It’s certainly its own kind of fun – sections gave me a sense of mental and actual vertigo. I’d fall where I wasn’t expecting it, only to “wake up” feeling every bit as turned around as my character. I’d shuffle around a room, hunting for objects to shift, before turning a critical corner and seeing the whole room fall into place – or become almost irrelevant. And some sections asked me to navigate labyrinths that can’t possibly exist.

It’s not always as showy about it as Escher or Gehry, but re-learning linear movement is a task no other game asks of me. I’m the kind of player who loves games that play with formulas. Bash different ideas together. Stretch one end of a genre to its logical, absurdist conclusion. That kind of uniqueness sticks in my craw, and it’s how I remembered Superliminal from a single gif posted to Twitter back when it was in development.

And, for its signposting problems, Superliminal has given me the simplest feature I never knew I wanted so badly:

Most single-player games developed nowadays can gracefully suspend themselves, sure. But being able to reset a puzzle or simply close a game for dinnertime – and knowing that I’m only discarding a minute or two of progress – is assurance that puts my mind at ease.

A Lack of Perspective

Much of the game’s story – told through Audio Logs, love ’em or hate ’em – builds on a presumption that the player feels “powerless”. That presenting you with challenges to iron out at your own pace will instill or aggravate a sense of inadequacy.

This didn’t line up with my experience at all.

I felt disoriented, certainly. Amazed at all the game’s sleight-of-hand tricks and sly illusions, absolutely. But it wasn’t punishing in a way that made me lose confidence.

For as much as the developers lean into the spatial-reasoning tricks that make this game sing, the writing doesn’t quite follow along with it. It does have a few moments of genuine cheekiness that had me giggle, sure enough. But it’s not a stark black comedy like the other puzzler I’m pointedly not name-dropping.

One important note: Superliminal displays a warning screen when you start a new game. Unfortunately, it’s shown for such a short time that I couldn’t read it in full before it evaporated. I feel like it’s right and fair to reprint it here:

To show this warning only once and not wait for its acknowledgement feels short-sighted, considering that it has potential repercussions on people’s health. It unfortunately leaves a bad aftertaste to note it here.

And, while we’re at it, a quick note that this game does contain an extended horror sequence. It’s more tense than violent or scary, to be fair. Still, it is enough that some with weaker constitutions – myself included – would benefit from playing it during daylight hours.

A lot of nice things the game does do for the player, though, can be found after the credits roll. A whole roll of the digital equivalent of “DVD extras” await those who’ve completed its very short campaign.

Luckily, a three-hour runtime makes it easy to replay alongside the developer commentary track. Driven by the same audio-log format as the main campaign, the observations range from “we wanted to create this archetype of story” to insights about how its norm-breaking gameplay was built. Your mileage may vary, but I found them to be a pleasant companion to breezing through the still-familiar puzzles.

The other major option is a “challenge mode”, asking the player to find critical paths through the game’s puzzles – e.g. “beat this room in under three moves”. It’s not what I usually go for, but considering that Superliminal also has a built-in speedrunning timer, players who like learning mastery over a game are given plenty of ways to do so.

Possibly the most compelling option – albeit an unfinished one I haven’t yet fully explored – is a sort of “sandbox” mode. Here, you can basically import any object, then carry it it into any level in the game. I’d be very interested to play with arbitrary, more complex models in this game’s sense of space. Unfortunately, this requires raw files with ‘.obj’ and ‘.fbx’ extensions, or sorting through community-driven Steam Workshop creations. That still puts a high ceiling on how far this game can stretch – basically, as far as your imagination takes you.

Like with any recommendation, it’s hard to nail down if any given player will like Superliminal sight-unseen. Doubly so when you’re talking about a game that, for its follies, successfully steps outside the usual boundaries. I can’t put a value on how, even for a few key moments, I was genuinely second-guessing the very space around me.

Superliminal could absolutely be a game that gives the same thing to you. If you value unique experiences over the amount of time you spend with a game, you’ll enjoy what it has to offer. If you’re comfortable enjoying the tactility of a game while overlooking its framing, you won’t mind its shortcomings. But as a bang-for-your-buck, total-package puzzle-adventure, you may find yourself wanting more from Superliminal.