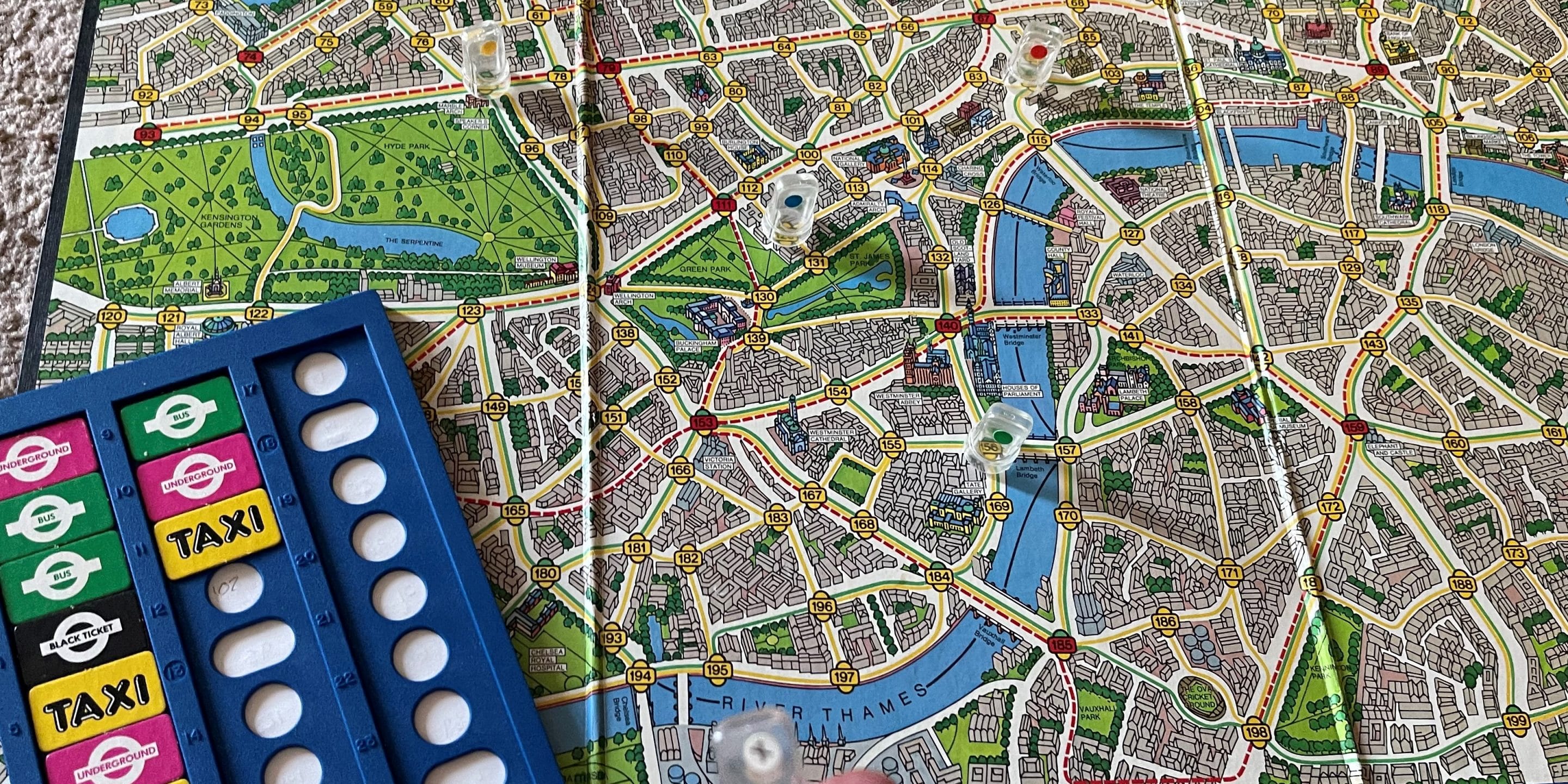 Scotland Yard: The Board Game

I love board/card games. When I was a kid, my family played board games quite often. I know that we owned lots of games and that we played a large variety… however one always stands out. Every year of my life my favorite board game has remained the same: Scotland Yard. Maybe it’s because I was pretty good at it. Maybe it’s because my dad actually did have the middle initial of X so him playing “Mister X” always made me laugh. Or maybe just because it’s a really good board game.

Scotland Yard was published in 1983 by Milton Bradley. This is the game version I own, and therefore most of the pictures in this article are of it. A newer version of the game released in 2013. From what I have heard and read, it appears to simply be a reskinned version of the original.

So what is it?

The premise of the game is that Scotland Yard detectives are chasing down the elusive criminal, Mister X through the streets of London.

One of the players is chosen to be Mister X for the game, while everyone else takes on the role of a detective. My favorite is always to be Mister (or Miss) X so you can be sneaky.

On the board there are hundreds of places scattered across London with numbers assigned to them to keep track of locations. At the beginning of the game, everyone draws a card that says what number they will start on. All of the detectives place their marker on the spot they are standing. Throughout the game they will move their little marker each turn and all can see where they are. The detectives discuss together aloud what their plans are and work to find Mister X. Meanwhile, Mister X only shows him/herself on rare occasions!

Every turn as Mister X moves, they write down what number they move to on a special move tracker and cover it up using a token to show if they traveled there via taxi, bus, underground, or a special black ticket. Each route available on the board is shown by colors (taxi lines by yellow, bus by green, etc). Using these clues, the detectives try to corner and eventually capture Mister X and win the game. Or, Mister X successfully gets away if they make it to the end of turn 24 without being found.

I have always preferred to play as Mister X. To me, it is all about the secrecy and eluding capture. My dad felt the same (and he was really good at it). However, I have since learned that we are a bit in the minority. Many of the players I have talked to actually prefer to play Detective. Being able to discuss strategies and tactics with the other players as they hunt down the criminal is where the fun is for them. Additionally, many say that playing as Mister X can be somewhat boring as there can be a lot of downtime. Generally, as Mister X, your turn goes rather quickly. However, the detectives can take a while as they debate amongst themselves and take each of their turns.

Perhaps I just like listening to their discussion and laughing silently to myself as they are completely going the wrong direction.

I have never been to London. I am fairly certain that the board for Scotland Yard is not entirely accurate however. Regardless, it is interesting to see all the little details they have included in it. As a child I was completely entranced with reading every single location. As I grew older and would read books or watch shows set in London, these names would ring familiar. So, while it may not have been accurate, it still became a foundation of my love of England!

Favorite game with dust on it

As I said at the beginning, Scotland Yard has always been my favorite game. Yes, there is probably an element of the nostalgia factor. However, Scotland Yard is legitimately a really good game as well. One that I recommend to anyone who has not played it before. Or even if they have. I have successfully gotten other friends and relatives to play it and love it enough to purchase for their own families.

For myself however, it has been years since I have been able to play. Even before the Covid-19 pandemic, it was difficult to find people in my new city who would play board games. So, my favorite game sits on the shelf gathering dust until the next time I can bribe people with treats to come over and play games with me. And then I know they will love it as well.

Elinzia sews, she crafts, she crochets, and she plays a LOT of video games. She is the co-host of The Nerdberg Review podcast, host of My HGTV Addiction podcast, and runs the Etsy store, TheCraftingRogue. You can also find her RPG musings on SwitchRPG.com