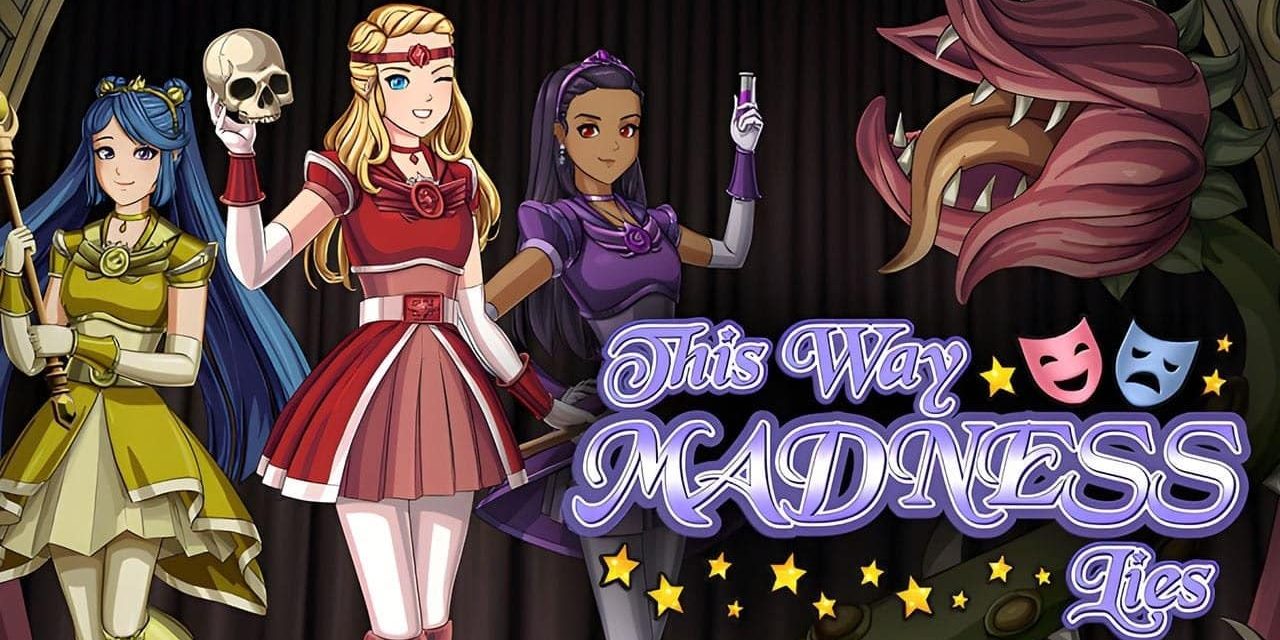 Taking inspiration from an unlikely pair of sources, Shakespeare and Sailor Moon, This Way Madness Lies is a quirky, charming, turn-based RPG!

Here at Geek to Geek Media, we’ve been following the work of Zeboyd Games for many years. (Check out Steve’s review of Cthulhu Saves Christmas for a recent example of our coverage.) Thus, I was very excited to receive a preview copy of their latest game, This Way Madness Lies. Considering that it’s a 16-bit-style game featuring anime magical girls, it couldn’t be more inside my wheelhouse.

This Way Madness Lies is a pixel art turn-based RPG in the style of retro classics like Dragon Quest and Final Fantasy. The game tells the story of the Stratford-Upon-Avon High Drama Society. By daylight, this group of teen girls performs the works of Shakespeare in their high school theater. However, by moonlight, they fight evil as a squad of magical girls that can travel into a parallel world where the works of Shakespeare come to life.

Considering this game’s two very different literary inspirations, Shakespeare and magical girl manga, it has to juggle two completely different writing styles at once. From what I’ve played so far, it pulls off both quite well! In particular, I appreciate the Shakespeare “translation” feature. With the press of a button, you can swap out any Elizabethan English text for a completely accurate modern English translation, often to hilarious effect. I also liked the banter between the girls in the squad; each has their own unique quirks that play well off each other, just like you’d expect in a classic anime.

This Way Madness Lies is a pretty game, combining elements of SNES and Genesis pixel art with some extra flourishes that only modern hardware can realize. Particularly eye-catching is the game’s battle screen, with its Sailor-Moon-meets-Shining-Force-2 aesthetic. During dialog, there are detailed character portraits that add an extra layer of expressiveness to the banter. And of course, there are magical girl transformation animations to hype you up for battle. Overall, this is a very stylish game.

Topping off the artistic package, is the game’s soundtrack. Some standouts include the hard-hitting vocal title track as well as the magical girl transformation music, which has unique instrumentation for each girl in the crew. Since you’ll be spending a lot of time in battles in this game, I’m also happy to report that the battle music is a bop.

This Way Madness Lies features a refined version of Zeboyd’s battle system previously seen in Cosmic Star Heroine and Cthulhu Saves Christmas. Each character has an arsenal of skills that can only be used once before needing to be recharged. Thus, this is a game that rewards making use of every move in each party member’s repertoire rather than relying on the basics; you can’t just mash “attack” to win fights as you can in Final Fantasy and Dragon Quest. Each magical girl has their own specialty, with some more straightforward than others. In the parts I’ve played so far, some of the more technical characters, like the buff/debuff-reliant Miranda, I still haven’t fully mastered.

With how tricky the game’s battles can be, I was grateful that the difficulty can be adjusted at any time, even in the middle of a dungeon. So far, I’ve found that somewhere between “Moderate” and “Challenging” has been the right fit for me. A good approach I’ve found is to lower the difficulty for regular enemy encounters and then bump it up a notch before a boss so I can really sink my teeth into the strategic gameplay. Of course, there’s also a generous “Easy” mode for those who are just there for the story.

Between dungeons, there is downtime for character interactions and classes. After all, these heroines are still in high school! During classes, the player may be prompted to answer questions from the teacher (similar to Persona). The player can also occasionally influence what the characters eat and what kind of pets they adopt. I haven’t played far enough to see what impact these decisions have, but they definitely provide a nice change of pace.

While This Way Madness Lies would make a fantastic Nintendo Switch game, it is currently only available on PC. Thankfully, there is a viable alternative to getting your handheld gaming fix: the Steam Deck. Despite not having an official Deck Compatibility score, I was pleasantly surprised to find that This Way Madness Lies runs great on Valve’s handheld. I spent an hour with it on the Steam Deck and was able to play the game without issues using the default settings.

At the time of writing, I’ve only had the opportunity to spend a few hours with This Way Madness Lies. In its first 3 acts, I’ve traveled through worlds based on Romeo and Juliet and The Winter’s Tale; it’s been a fun ride! In a short amount of time this quirky, charming game has really gotten its hooks into me. I can’t wait to play more!