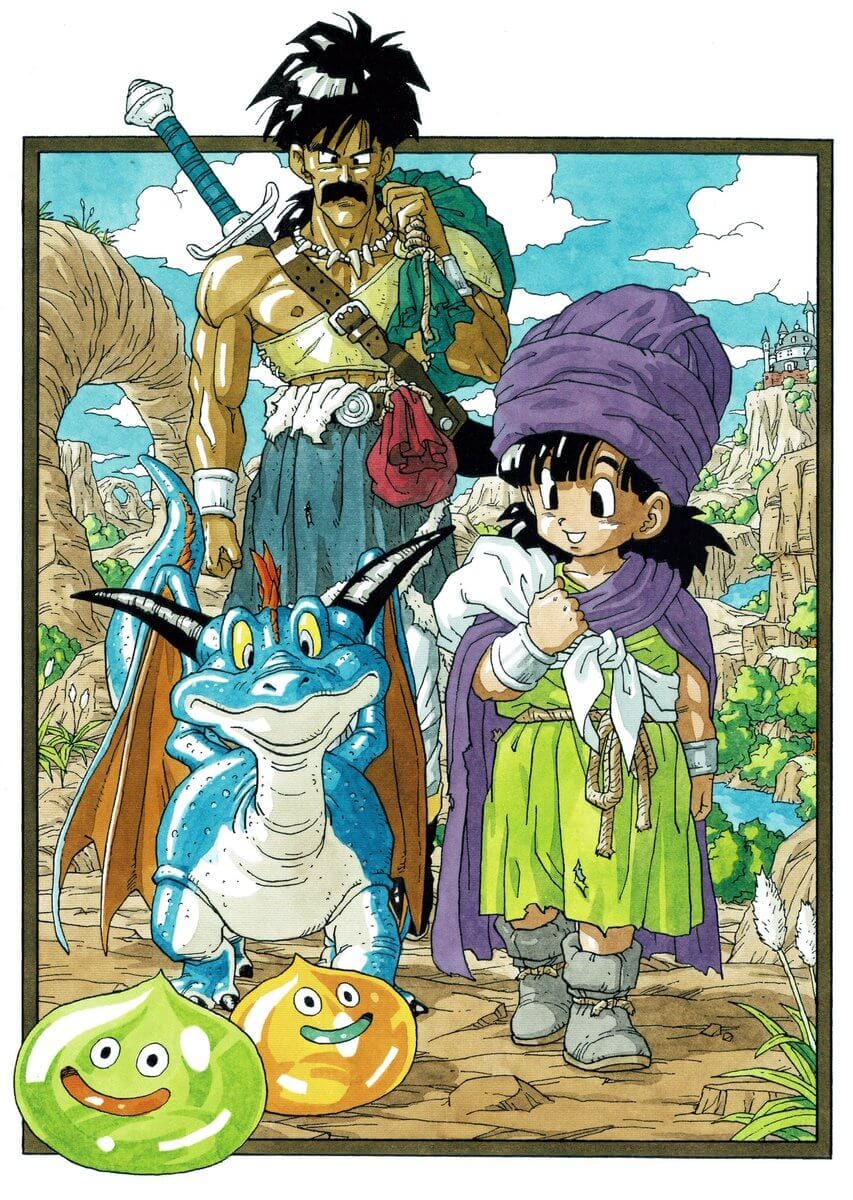 Before we dive into the awesomeness that is Dragon Quest V: Hand of the Heavenly Bride, let me mention two things. First, this is probably my favorite DQ game besides XI, so you won’t find many complaints or criticisms here. Secondly, the main story is split into three parts, so I’m splitting up my posts like that, too.

This first part deals with the hero’s childhood, so naturally that’s where we’ll begin!

The world of Dragon Quest V is different from IV, although the kingdom of Zenithia and the Zenith Dragon are found in both. The game centers on our Hero, a prince who is wandering around the world with his father, Pankraz, and looking for his kidnapped mother. Throughout the game, players will choose a character to marry (hence, the name of the game) and start a family of their own.

The battle system is different from previous games in that you can tame monsters in battle and then recruit them to fight for you as if they were human party members. Pretty cool, huh?

If you’re a fan of Pokemon, Digimon, Yo-Kai Watch (etc., etc.), then this is where it all began.

While I didn’t spend the time and effort recruiting every single recruitable monster, I finished the game with around 25 different ones. It was a fun mechanic that made combat ever-evolving, since you trade out human and monster party members quite often.

Welcome to the World

The story of Dragon Quest V is both romantic and heartbreaking; it’s a revenge tale with an emphasis on love and family. The story is extremely personal. The game even starts out with the main character’s birth. It’s also probably the best story of any Dragon Quest game.

The first part of Dragon Quest V deals mostly with introducing the main cast. Some of these characters, like Nera, you won’t see again for a long time. Others, like your father’s trusty sidekick Sancho, will be important sooner.

This first act also introduces your childhood friend, Bianca, and the two of you go on a memorable excursion to a haunted castle. There, you find a golden orb that seems to be important. Hmmmm. We’d better hang onto that. Afterward, you rescue a cute little saber cub from some village bullies. All of this, of course, is building up for later in the game.

I won’t go over every plot point, but you have to think of the “Childhood” section as Act One of a play. The characters are introduced, the villain and overall plot are at least mentioned, and then the whole thing ends on cliffhanger. If this were a book, you’d definitely stay up all night reading it.

Near the end of the Childhood section, you and your father, Pankraz, will be tasked with watching over Harry, a prince and a spoiled little brat. Not long after, you’ll have your first confrontation with Bishop Ladja and his goons. Remember these guys. You’ll run into them quite a bit.

A lot of stuff happens. Some of it’s nice; most of it is heartbreaking.

The beginning of this section starts off innocently. You are a baby, after all. Even as a child, you get the feeling Pankraz and Sancho might be shielding you from some terrible truths. A short trip into the fairy world near the start of the game also plays into this theme of innocence.

As you explore the world with Pankraz and your saber cub, you begin to see darker edges. And by end of this act, all innocence has been lost. You’re no longer a bright-eyed boy with big dreams. Oh, no, no. You lose your father, you lose your saber cub, and you’re sold into slavery with that brat Harry. You can’t get much darker than that. All hope seems to have been lost.

But…wow! What a way to end your childhood, huh? Don’t you want to keep playing and see how things turn out? I certainly did.

Like I said earlier, I loved this game. For this first section, I’m not sure I found anything to gripe about. The story and characters are instantly likable (yes, even young Debora; she’s comic relief). Next week, we’ll explore the “Young Adulthood” section of the game. So, get your hormones pumping and get ready to fall in love!