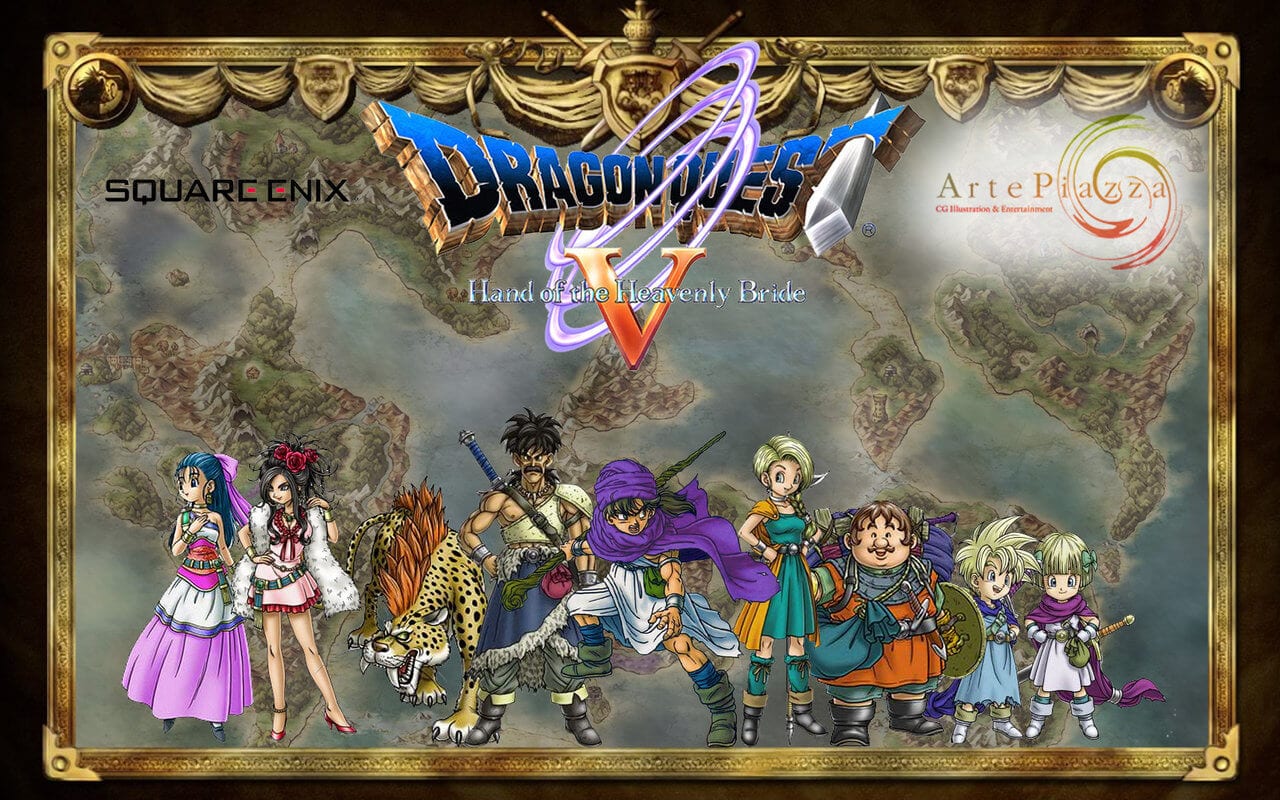 This week, I’m talking about Dragon Quest V: Hand of the Heavenly Bride! The game is divided into three parts, based on the hero’s age, so the posts are divided up that way, too. You can find the first part, detailing the hero’s childhood, right here. The second part, dealing with young adulthood, is here.

Today, I’m exploring the final act of the game, which covers the hero’s adulthood and fatherhood. In this last leg of the game, we get to know our kids, collect some fancy armor and weapons, rescue our bride (again!), and take on the ultimate bad guy. There are going to be lots of reunions, too! So I hope you brought your hankies.

Fair warning: there are some spoilers ahead!

From Slave to Shepherd to…Stone?!?

Act Two ended on a major cliffhanger. The hero and his bride were turned to stone, separated, and sold at auction as sculptures. After a few cutscenes, Act Three opens up with our trusty friend Sancho and two little kids. That hair looks familiar…

That’s right. Your kids (now about eight), Parry and Madchen, have come with Sancho to rescue you! It’s taken a long time, but they’ve finally managed to track you down and turn you back from stone!

That’s the good news. The bad news is that no one knows the whereabouts of your wife/their mother.

You’ve already rescued your bride a couple of times, so you should be used to it by now. You’re going to have to do it again. Along the way, maybe we’ll track down that Zenithian equipment and sword. The hero still can’t use it, but it looks like Parry can!

That’s right, folks! Parry is the legendary hero who you and your father, Pankraz, were searching for–like, almost twenty years ago. Better late than never, I guess.

Your journey will lead you lots of places. You’ll find Zenithia equipment along the way, and you even get to restore Zenithia itself! It’s a fun, jet- setting trip across the world. The dungeons are great, and I always enjoy the parts of these games that involve collecting legendary equipment and weapons.

The final act introduces a few memorable characters and scenes as well: first, there’s Dr. Agon, a guy who talks like Ned Flanders from The Simpsons–but without all the religious stuff. His name also seems suspiciously like dragon. Hmmm.

Secondly, there’s a giant moose-demon called Bjorn the Behemoose. Nera’s dad will task you with checking up on a pot inside a cave. Trust me, it’s more interesting than it sounds. It all ends with the Behemoose being resurrected. If you’re lucky, you can defeat Bjorn before he destroys all of Mostroferrato.

Late in the game, the party will find their way to the occult temple the hero and the other slaves were building in Act Two. It’s all finished now, and dozens of the Lord of the Underworld’s minions are here, worshipping a guy that looks a bit like King K. Rool from Donkey Kong.

Ultimately, you’ll rescue your bride and encounter both Bishop Ladja (again) and his lackeys (again).

Most of Act Three, however, focuses on the restoration of Zenithia, the floating holy city. It’s almost exactly like the Zenithia seen in Dragon Quest IV, with only a few minor changes.

There are plenty of twists and turns along the way (which I won’t spoil here), but once you’ve gathered the Zenithian equipment and sword, and after you’ve restored Zenithia and rescued your bride, it’s time to face the final boss.

Remember in my first post, I said that this game is all about romance and revenge? Well, it’s been a long time, but we’re finally about to avenge all the terrible stuff that’s happened… kinda.

First, we get to take down Bishop Ladja once and for all (this was especially satisfying, by the way). Then, it’s time to dispose of his goons. After that, it’s a short trip to our final encounter with Grandmaster Nimzo, the bad dude who’s behind all the world’s woes.

The final boss is good. However, after the seven phases of Psaro the Manslayer in Dragon Quest IV, Nimzo felt like a bit of a pushover. After beating him, you’ll get a satisfying ending that sees the hero and his family flying all around the world and meeting back up with friends you’ve met along your quest. I highly recommend talking to your bride and children at each of these stops, since you get some really good dialogue here.

There’s plenty of postgame goodies, too. While I didn’t spend as much time in V‘s postgame as I did in IV, I played around for a bit before moving on to playing VI. I tamed a few new monsters and explored at least one of the postgame dungeons. I did not, however, take the time to grind up enough levels to take out Estark (he’s the Underworld baddie in the mines in Dragon Quest IV, the one whose resurrection you prevent).

I’m 100% sure I will replay Dragon Quest V again, and I will probably do more with the postgame then. For now, I was just eager to get to VI to see what it had to offer.

Dragon Quest V is probably my favorite game in the series outside of XI. It probably has the best story, though, and some of the most memorable characters. I’m cannot recommend this game enough. If you haven’t played it, go play it! For now, I’m excited for the upcoming movie based on V, and I look forward to replaying it again once I finish the rest of the series.