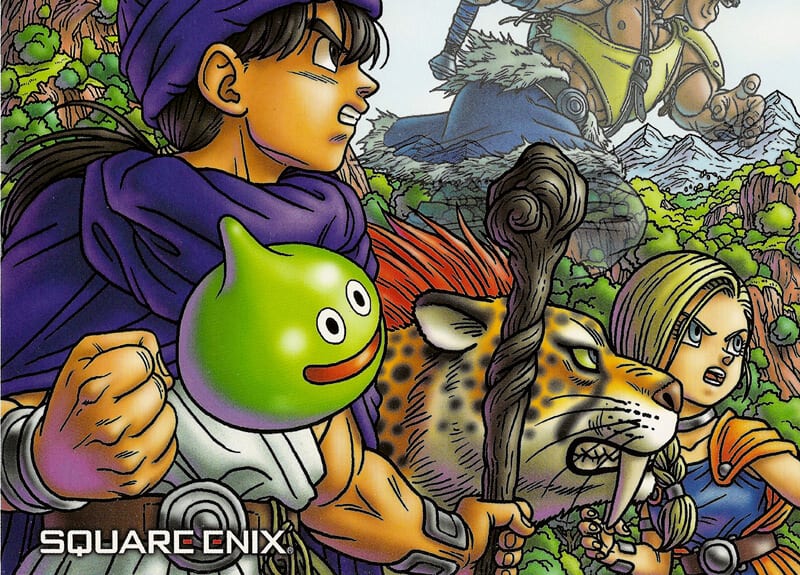 This week, I’m talking about Dragon Quest V: Hand of the Heavenly Bride! The game is divided into three parts, based on the hero’s age, so the posts are divided up that way, too. You can find the first part, detailing the hero’s childhood, right here.

Today, I’m exploring Act Two of the game, which details the hero’s young adulthood. In this section, we make new friends, tame monsters, get married, and even have a couple of kids! It’s a lot of stuff to cover, so let’s go ahead and get started!

Fair warning: there are some spoilers ahead!

A Slave and a Shepherd

After the cliffhanger ending of Act One, Act Two begins roughly ten years later. You and your friend Harry were sold into slavery, remember, and now you’re both working with other slaves to help build some kind of occult temple. Luckily, you manage to escape early on and get Harry back on the throne where he belongs.

During these past ten years, a lot has happened. The most immediate thing you’ll notice is that Harry isn’t such a jerk anymore. Instead, he and the hero are both friends. I guess ten years of slavery can do that…

The outside world seems a bit darker and more fearful now. People are a bit more cautious. There are rumors of the Lord of the Underworld coming back to power. And while we don’t quite see the darkness of Act Three yet, there certainly seems to be something malicious looming about. I guess we’d better get prepared.

Not long into Act Two, you can start recruiting monsters into your party. It’s an interesting mechanic, and it’s also one of my favorite mechanics in any of the Dragon Quest games. I mentioned in the last post that this was a precursor to Pokemon, Digimon, Yo-Kai Watch, et al. So, if you haven’t played DQ V yet, keep those games in mind here.

Not every monster is recruitable, and some (like slimes) seem much easier to tame than others. I think by the end of the game, I had tamed three different slimes and sent several more back into the wild.

You tame monsters by defeating them in battle. Occasionally, a monster will hang around after the fight and ask to join you. The monsters can be equipped with weapons and armor–just like human party members–and can also learn some valuable abilities and spells. You can trade out monsters as you tame more. Hopefully, you’ll like this mechanic (and you should) because for long stretches of Act Two, you’re only playing as the hero and tamed monsters.

I was often reminded of a shepherd during this section. The hero even carries a cane that’s similar to a shepherd’s crook. When he’s hobbling around the over-world with three monsters and a wagon behind him, it’s easy to picture a shepherd leading sheep around.

This also marks the first time in the series that our main hero isn’t dressed in armor and/or carrying around an impressive sword. Instead, you spend the game dressed in rags and a purple turban, all while leaning on your walking stick. Our hero is quite the humble guy.

This was likely done for two reasons: (A) to play into the shepherd vibe, since you’re taming monsters already, and (B) to show that the main character is both an exile and an outcast, who’s wandering the world in search of his kidnapped mother and his own birthright. There’s no pretty armor or legendary swords for this guy. That cool stuff will have to wait for someone else, especially since it’s made clear early in the story that the hero isn’t a descendant of THE hero of legend who will vanquish evil from the world.

It’s a real bummer. I guess that pretty Zenithian armor and sword will have to go to someone else…

Besides monster taming, the biggest focus of Act Two is the story. Act Two is all about romance. Early in this section, you’re tasked with finding two rings for Rodrigo Briscoletti, a rich guy who talks in puns that are all related to Italian foods. If you find the rings, you can marry his pretty blue-haired daughter, Nera. You met them both as a kid, during the first few minutes of the game, so you should recognize them here.

Not long after starting your search for the two rings, you run into Bianca again. She accompanies you on your quest, and it’s just like being kids again. After finding the rings, you’re faced with an important decision. It’s so important, in fact, the game is named Hand of the Heavenly Bride. That’s right–you have to choose who you want to marry.

Besides Nera and Bianca, the DS and iOS versions also let you choose Debora (Nera’s comically mean sister). Personally, I have no clue why anyone would choose Debora unless you’re some kind of masochist. I chose Bianca because she was my favorite character in Dragon Quest Heroes (and because Nera is so obviously in love with that goober Crispin instead of you).

It really doesn’t matter. From what I’ve read, it doesn’t change the game at all. I saved right before the wedding and married them all just to see what it was like (pretty sneaky, sis!). Nera has better magic stats and seems perfect for healing, Bianca is more useful with physical attacks, and I’m assuming Debora is a hybrid of the two. I don’t know. I married Debora and never went back to that save file.

After the wedding, you and your bride will head out and continue your journey to find your missing mother and avenge your father’s death. We’re nearing the end of Act Two now, and you may have noticed that your bride is acting kinda funny. Hmm, I wonder what that could be about…

In case the game was too subtle (and it isn’t), you probably know your bride is pregnant before the big surprise. Along the journey, she has several spells that cause her to fall down, pass out, or become bedridden. Thankfully, no babies pop out until you reach the kingdom of Gotha. Wow, what luck!

And speaking of Gotha, this section isn’t titled “Gettin’ Busy” just because we’re popping out some babies. It’s also because you’ve returned to your kingdom, and (drum roll) you’re the rightful king! Lots of stuff to do. Busy, busy, busy.

You have to prove yourself, of course, to get the throne, but your uncle is more than willing to hand it over. I was convinced the hero’s uncle had ulterior motives, but I was proved wrong time and time again. I guess he’s just an overly nice dude who really hates ruling over Gotha.

Not long after, Bianca will collapse and the big day has finally arrived. Hope you’re ready to be a papa!

Oh, and I hope you’re ready for twins because–ta-da!–you got twins! A boy and a girl. The DS version gives them the default names Parry and Madchen, so that’s what I’ll stick with here.

A celebration follows. Uh-oh. Remember in an earlier post, when I said celebrations were never a good thing in Dragon Quest games? If not, you find that post right here. But, seriously, celebrations are never good. Something bad always happens that night.

In Dragon Quest V, some monsters break in and steal your lovely bride. Thankfully, the nurse managed to hide with the babies, so they’re safe for now.

But this means going into the heart of darkness with your monster friends and rescuing your wife. After a series of events (and some more confrontations with Bishop Ladja and his lackeys), the Hero and his wife are turned into stone.

Some cutscenes follow. A nice little mini-story is told. It’s a bittersweet vignette that jumps the story ahead by another eight years or so. Our hero and his wife are separated and still turned to stone. Like Act One, Act Two ends on a bit of a cliffhanger. Thankfully, we can play straight through into Act Three.

Act Two was a whirlwind of storytelling and gameplay mechanics. The world really opens up in this chapter, and players can begin to see the larger, overall story. During this time, you are reunited with the saber cub you had as a child (although Saber is much bigger now), and if you can recruit a Slime Knight, I highly advise it. I played through most of this section with our Hero, Saber, Slime Knight, and Bianca. I also managed to get an Orc King early on, which meant I had access to the Zing spell (super useful).

I’ll start with Act Three next week. Act Two covers a lot of story. I had to cut a lot of it out because this post is getting long, but it’s some of the best storytelling I’ve ever seen in a game. If you haven’t played it yet, please pick it up. You’re in for a good time.