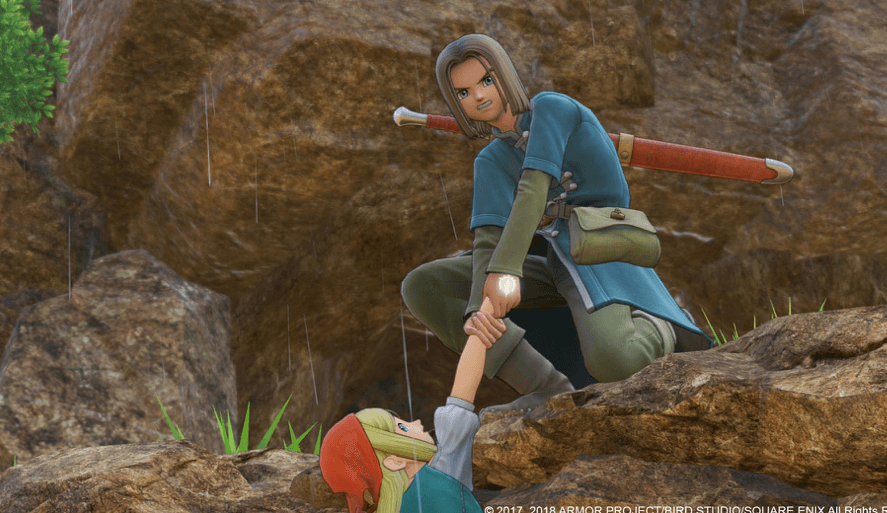 As promised, I’m here to write (A LOT!) about Dragon Quest XI: Echoes of an Elusive Age. This is going to be as close to spoiler free as possible. There are characters and events I’d love to talk about, but…the game is only six months old and I don’t want to ruin it for people. And if you haven’t played it, go play it! Right now. Stop reading this and go play Dragon Quest XI instead!

Are you still there? Did you go play Dragon Quest XI instead? I hope so.

The world of Dragon Quest XI is called Erdrea. It’s a sprawling world with a vast desert, snowy mountains, lovely meadows, quaint villages, epic kingdoms, and a giant French prep school for girls–even zombies and talking slugs are welcome there. French prep school for girls? Zombies and talking slugs? Yeah, that’s right. You heard me. It was weird and I loved every minute of it!

Speaking of turn-based combat. OMG, the combat in this game is so good! Dragon Quest XI is the turn-based RPG I’ve waited over a decade to play. I was super disappointed in Octopath Traveler for the Nintendo Switch: the battles were fun but got repetitive, the storylines were generic, there wasn’t a big villain, and the characters felt as bland as Piers Morgan in front of a beige wall. But Dragon Quest XI feels completely different.

First, DQ11 has totally contemporary graphics. Purposefully cartoonish? Totally. But beautiful nonetheless. I feel like so many games (cough, Octopath, cough) seem to rely heavily on nostalgia by using sprites and pixelated graphics that resemble something you might find on the SNES. Personally, it gives me a headache. I’m not a fan.

DQ11, though,feels like one of those mid- to late ’90s JRPGs we all know and love, but it looks like something distinctly contemporary.

Secondly, DQ11 comes with the ability to change your party members’ tactics. For example, you can keep their tactics on “Fight Wisely,” which means they fight by themselves. And the AI is incredible! I was very impressed.

Most of the 106 hours I spent playing the game and getting a Platinum Trophy on the PS4, I had my party’s Tactics set to Fight Wisely and let the AI control them. I know that’s probably sacrilegious to some of you, but the AI was seriously great and it definitely helped when I had to grind levels in the postgame to get all those Level 99 trophies.

You can change Tactics easily, with options ranging from “Don’t Use Magic” to “Focus on Healing” or “Show No Mercy.” Other than Fight Wisely, the only one I used was Follow Orders, which lets you control each party member individually. A lot of bosses in the postgame required this Tactic, by the way.

Wow. I just spent a crazy amount of time talking about the combat system. Let’s move on.

The characters in Dragon Quest XI are well-rounded and complicated–especially for JRPGs, which tend to rely on archetypes and stereotypes too often.

The main hero is the Luminary. Like other Dragon Quest games, you can name him whatever you want. Name him Hero (most people seem to), name him after yourself (another common one), or name him something filthy that makes you giggle every time you load up your game.

At first, I thought the healer, Serena, was a bit flat. Her twin sister Veronica is a loud-mouthed, sassy mage who’s been turned into a child. Maybe Veronica’s loud personality and backstory just overshadowed Serena. I don’t know. For whatever reason, I didn’t like Serena very much. The others seemed much more interesting. But then…

Uh oh. Got really close to spoilers there.

Let’s just say that Serena gets a lot better, if you think she’s boring in the beginning. By the end of the game, I loved every single character. They all felt like my friends. Cheesy? Yes. Truthful? Yes. And after spending over 100 hours with them, that’s probably a good thing. I’ve spent just as long on other games that had characters I liked a lot less.

My favorite character was probably Sylvando. He’s a flamboyant juggler/entertainer from the circus with a secret past. He’s silly and has a terrible accent that sometimes sounds Spanish, sometimes German, and sometimes French. He calls almost everyone “darling” like he’s Elizabeth Freakin’ Taylor, and he has the perfect combination of smarmy wisecracks and endearing pick-me-ups.

Every time Sylvando spoke, I found myself wearing a sloppy grin on my face. Sometimes, he made me (and my wife, who watched me play a lot of this game) laugh out loud. Literally LOL. I don’t laugh out loud at games very often, but Sylvando made me cackle a lot.

Getting Carried Away Again…

I could spend hours just talking about the characters. And maybe I will. This is, after all, a 47-part documentary narrated by Ken Burns.*

My early thoughts while exploring those first few hours of Erdrea might even be best described by snippets of texts I sent to B.J. while I was playing:

(1) “It’s turn-based combat, but you can move around like an action RPG. Idk. It’s weird. I don’t think there’s a reason for it.”

(2) “You can start with the clothes from DQVIII‘s hero!”

(4) “Uhhhhh. This healer is so boring. Why are healers always so boring?”

(5) “I miss Helix from Dragon Quest Heroes and all his goo puns. Every one of these games needs a slime sidekick. It’d be goooooood.”

Those weren’t made up. I literally went through my phone and found five good texts that summarize my early experiences in Erdrea. Like I said earlier, some of these changed. I actually came to love the healer, Serena. But I stand by the slime sidekick. Slime sidekicks are always gooooood.