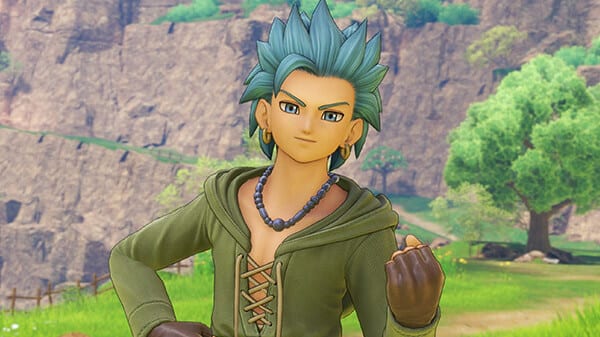 Update: As of the DQ 35th Anniversary livestream, we know this title has become Dragon Quest Treasures and not a new Dragon Quest Monsters game. The post still references it as Monsters, but the ideas are the same. When we know more, we’ll definitely be writing about it. In the meantime, be sure to listen to DQFM to hear us talk about this game and more!

And if there’s one character I feel like I see people using as their online avatars and profile pics on Twitter, it seems to be Erik. I don’t remember him being quite as popular when the game originally released on PS4 and PC, but it seems that with Dragon Quest XI S coming out, Erik is popping up all over the place.

Thankfully, we’re getting a spin-off game with him. And, hopefully, it’s coming soon.

It’s been over a year since we got the announcement that Erik and his sister Mia would be starring in their own Monsters spin-off game, and we’ve had very little news since.

Outside of some Toriyama art, which has made the internet rounds since late 2018, we haven’t seen anything. All we have at this point are rumors and speculation.

Since the other Monsters games have all focused on mainline characters as kids, it’s not surprising that the new one focuses on Erik and Mia as children.

The two had interesting plot points in the main story of XI, but Erik’s childhood is wide open. We don’t know much about it at all. We got a prequel one-off manga in V Jump, which I bought and read with the help of a translate app. Other than seeing Erik in a new outfit and getting some background info on the fun-sized forge and how Erik wound up in the dungeons beneath Helidor castle, the manga didn’t offer many insights into Erik’s past.

Because of the lack of information about Erik’s childhood, the new Monsters game could do just about anything. We know Erik and Mia were raised by vikings and weren’t treated very kindly, but that’s about it.

So, with information so scarce, why the heck am I so excited for it?

I’m excited for a lot of reasons. But the first thing I want to touch on is the new story content we got for Erik in XI S, in which he’s paired up with Healijah, a friendly healslime that is more than he seems. Although it felt like a callback to running around with Ragnar and Healie in Dragon Quest IV, it also sets the stage for what a Monsters game starring Erik could feel like.

I’ve loved the slime sidekick Slib in the Monsters+ manga series, and if we could get that kind of repartee going with Erik and a new slime sidekick, I’d be all for it.

This reason is obvious. The monsters in Dragon Quest games are great. They look awesome and whacky, and they even have distinct personality traits. Whether it’s the “goo” puns in slimes, the “hAvE yOu eVeR sEen a mEmE uSe tHiS fOnt” speech of the zombies and other undead enemies, or The Godfather-esque plattypunks in Rocket Slime–Dragon Quest has done a great job of giving its monsters distinct and anthropomorphic traits.

With the Tickington content in XI S, we were able to access past DQ worlds via the Altar of Ages. The Monsters games use a similar type of inter-world traversing by having its M.M.s (Monster Masters) using Travelers’ Gates. These gates allowed Terry to travel to other worlds in the first Monsters game, and it allowed Kleo to travel to past Dragon Quest worlds in the Monsters+ manga.

So it’s not hard to leap from there and hope that the new Monsters game will see Erik and Mia trekking through some old stomping grounds of past Dragon Quest games.

I would love to see them encountering some M.M.s from other games, like Terry and Keifer. Will that really happen? Who knows. But based on what we’ve seen in past Monsters entries and in XI S, I’d say it’s certainly possible.

Timing, as they say, is everything.

And the timing is perfect for a new Dragon Quest Monsters game to be a hit. Despite some fan backlash, Pokemon is as popular as ever (just look at those sales figures), and I think a game like Monsters could really benefit from that. It is, after all, another monster-recruiting/monster-fighting game.

Dragon Quest Builders 2 was also a hit this summer and seemed to make some new converts to the DQ fandom here in the West. With the release of XI S (and I still haven’t seen sales figures in the West for that), the momentum seems to just keep building.

We’re thankfully getting a Western release for Dragon Quest of the Stars in 2020, and while that’s on mobile, I still think it can help keep the momentum going.

I hope Square Enix/Armor Project takes advantage of this momentum and doesn’t sit on Monsters for too long. A new console release like Monsters could really help out the franchise (and, let’s be honest, I’m dying to play it). However, I’d much prefer Armor Project take their time and give us a quality game that’s fun to play.

The best things, as they say, are worth waiting for.