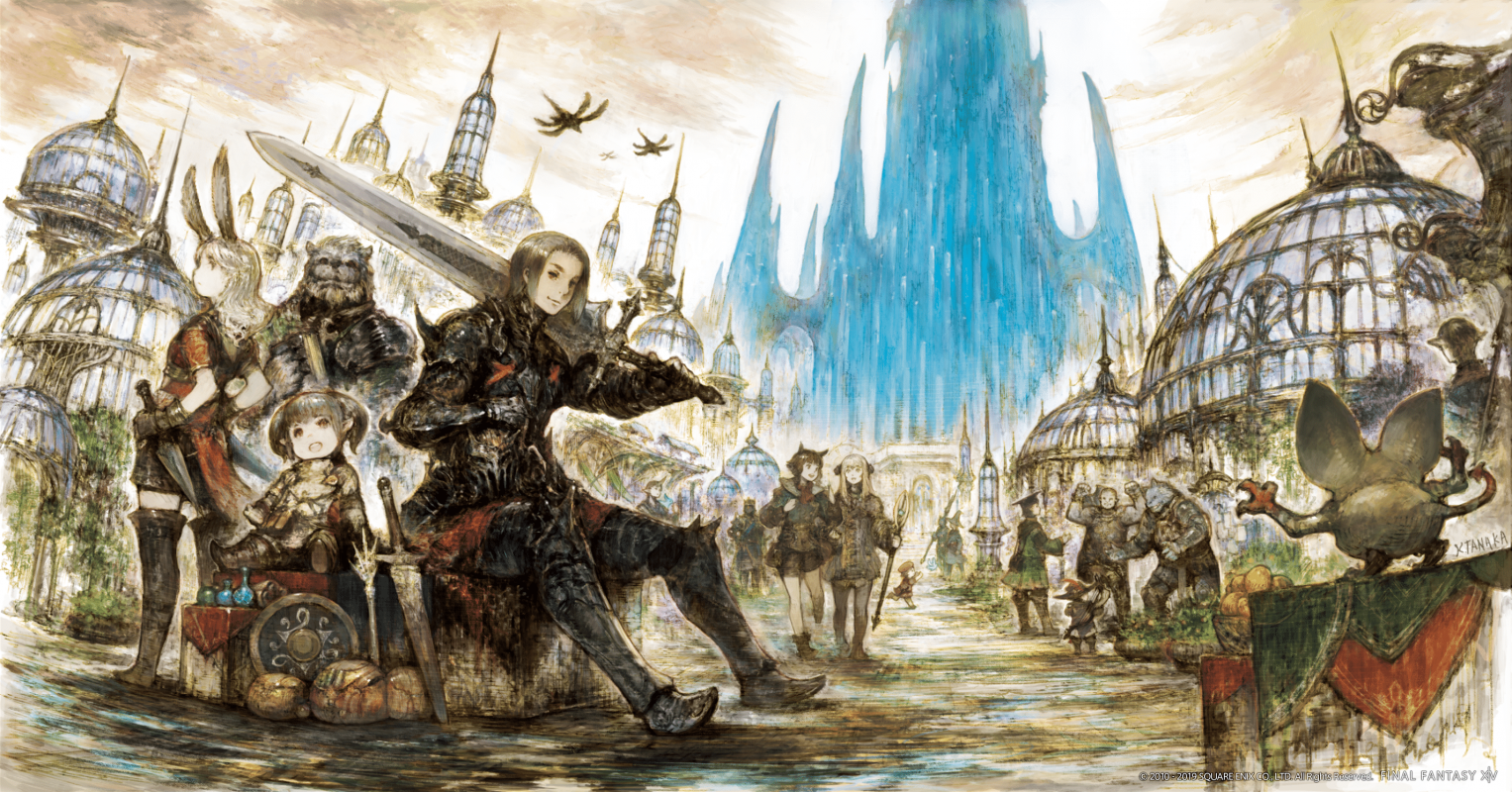 An MMO got its claws in me.

Makes some sense that it’d be Final Fantasy XIV.

To be clear, this isn’t the first time I’ve made a pass at this particular MMO, let alone the genre as a whole. What with entirely too much wasted spare time in college, I tried to get into the lot in about five different ways.

The Old Republic promised something focused and story-driven. Vindictus broke away from the genre-standard “action hotbar” in favor of arcade-y action. Even LEGO had a thumb in that pie for all of fourteen months.

And yes, I tried the original release of Final Fantasy XIV. In its Beta stage, if I recall right. I still have a distinct memory of the game struggling to walk under its own weight, and a curious roommate assuming that my PC just wasn’t up to the task. Time has more or less proven that one out.

So why does Final Fantasy XIV work for me now?

Well, for one, I’m just more of a Final Fantasy fan than I was even three or four years ago, when I last got curious (back around the first time Geek to Geek talked about it – I even submitted listener questions!). I’ve played the other half of the series since, and I’ve got a craving for a new mainline entry that likely isn’t coming for a few years yet.

I’m invested in the series’ development now, down to a sweet tooth for Akihiko Yoshida’s art and designs.

And man, is the development for this game a doozy. I could make a good case that half of what finally drew me in was a dive into all the stories around the game’s relaunch, from the expert NoClip documentary to scattered amateur footage of what actual gameplay was like in the death throes of the original game.

For the uninitiated, the original release of Final Fantasy XIV was… famously clunky. But to pull out of the nose-dive, the development team didn’t just take a hiatus and re-launch. Instead, they wove it into the game’s ongoing story. They took the time to patch and wind down its famously-disastrous original version. Then, as a “season finale”, they constructed a literal “End of the World” scenario inside the game to tie into its retirement, experienced live by its players.

And that’s still a driving force in the story I’m playing through right now.

Do you know what feels like a genuine and authentic-to-its-roots role-playing experience?

One crafted specifically for the players by a cunning Game Master.

As stupidly obvious as that sounds for a Massively Multiplayer online RPG, it’s the glue that’s finally stuck me to this game and its decade of lived-in history. Somehow, it took me three strikes to finally internalize that this isn’t meant for solo play. That the point isn‘t to clear every single quest in every hub like a chump.

When you’re dropped in a new city, be it New York or New Gridania, you might as well be alone. There are another dozen people around every corner, each nose-down in their own tasks. I’d hardly feel more comfortable interrupting another player than a stranger downtown.

In that way, it kind of is just a slow single-player game while you get your bearings. One-on-one fights with hotbar-driven combat feel like slowly, pulling, teeth. Even if you’ve got someone else on board with you, you’re likely not always on at the same times.

Now, I tend to gravitate toward Support roles in other multiplayer games. Of course cresting that particular hill, where the game finally feels comfortable letting you play with strangers, is where it finally “clicked” for me. It’s where the game goes from tedious, routine struggles to managing a whole field of monsters and allies, like I’d finally left a long tutorial.

In short, I finally got to play an MMO in the form that’s always been promised to me. I guess I just had to muscle down that first ten hours for the game to finally resemble the experience I expected.

Then again, that’s the entire length of another game I might have played that month.

But parties are just the thin end of a wedge here.

Cooperative Play is the Entire Frame

In short, I’ve never had such a high ratio of pleasant player interactions in this game.

The meat and potatoes – the dungeons – really show this. Some players will push to move as fast as possible, sure. But they always seem to have self-awareness about when they’ve pushed too hard and far for others to keep up. Even high-level players retain an understanding of how new “sprouts” need leeway to watch cutscenes and be told the mechanics; whenever our parties fall, I’m rarely revived before there’s already a “sorry; that’s on me” in the chat.

And it just extends outward from there. If you take a second to look, it really shows that this is a “forever game” for some folks. One that they pour hundreds to over a thousand hours into over the course of years.

Last week, I ran into a Miqo’te crafting and handing out cosmetic glasses for free. To level up her smithing skill? Possibly. Just for fun, or because they like the look of them? It seems just as likely at this point.

There’s a specific spot in the server I’m on where in-game dancers show up. Every day, on a reliable schedule. Not because the developers put them there, but because of some very dedicated player logs in with that level of consistency.

And that’s to say nothing of the Bards.

Bards might be my favorite part of Final Fantasy XIV.

When I heard about the Bard’s unique “class feature”, I instantly put this class in my list of things to level up when I had downtime.

It’s been one of the best decisions to engage me with the game so far.

They get a unique “performance mode”, where typing certain keys will play certain notes on an in-game harp or flute or one of a dozen other instruments. It’s a cute little idea.

And so, of course, people have seriously exploited it for the better.

You could, with some elbow grease, hook an electric keyboard up to your game and play music directly, for all the world to hear.

You could just get really good at practicing specific songs on the letter keys as a pseudo-instrument.

But by far it seems more common for people to compose music out of the game, then use special tools to automatically play them in-game. It’s like a subclass in wizardry. And, obviously, there’s an entire pocket community around Final Fantasy XIV based entirely around it.

…I may or may not have spent another ten hours on the game that way without ever opening the launcher.

And then, when I got back in, I could sit aside the town square and watch the people wander by, playing my lute. Some stop by and listen a while. Others give a little cheer and walk on. On occasion, some even offer to play for me, a song for a song.

Turns out, busking can be a fun hobby.

But I don’t have to.

There’s just too many reasons to fall in love with Final Fantasy XIV.

I haven’t even gotten yet to Zach. Zach was my best friend in the world for eight weeks each summer in college, when we’d work as camp counselors together. As recently as a few weeks ago, I hadn’t seen Zach in six years.

Next week, we’re running dungeons together and catching up.

This hasn’t happened for me to this extent with any other video game.

Which just makes an eighth reason why this has finally clicked with me. Or maybe tenth? I’ve honestly lost count.

Because when I say this game has its hooks in me, I mean it has a large number of hooks in me, none of which might have kept me individually.

And I can absolutely see more to come. The game’s famously-rich housing system is still off-limits to me. I can only yet equip a corner of the game’s gorgeously-designed armory. And I’m endlessly told that the core story positively soars in later chapters.

Sure, I don’t nestle in and tune out the rest of the world when I play. Maybe I’m not “in the zone” like I tend to get when I’m seriously absorbing a normal single-player campaign.

But balancing Final Fantasy XIV‘s different systems and draws at once – even just a small set of them – is a different kind of engaging.

It’s like a microcosm of a Sunday afternoon. I could go tackle a to-do list, or practice music, or take in a story, or anything that catches my fancy. Each option is as rich as the last, and there’s a legion of people to share each with.

Almost to the level of Animal Crossing or Rune Factory, this truly feels like a space that I could just live in, or even just visit for a few months every year.

And I’m excited to see how that continues to unfold.