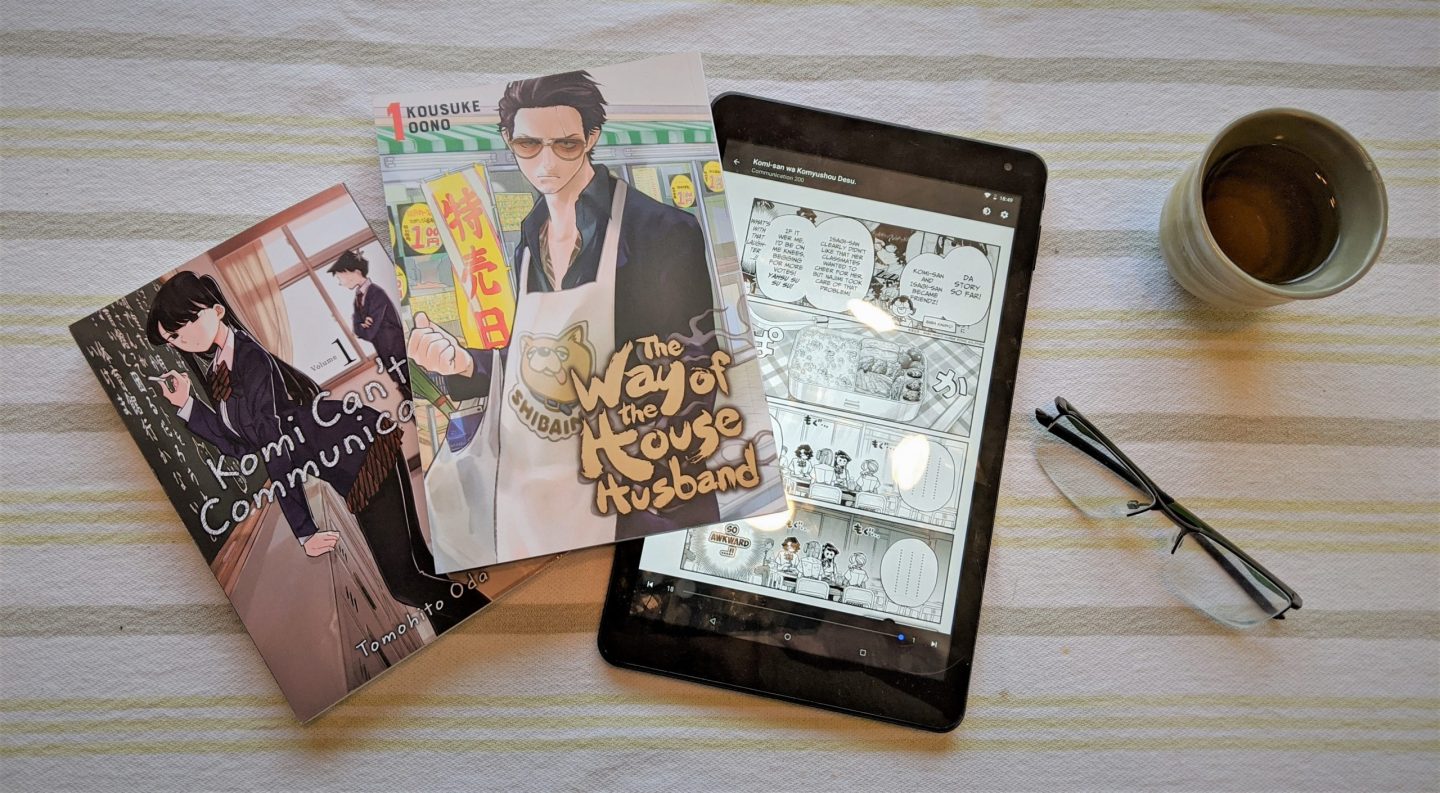 Komi-san Can’t Communicate and Gokushufudou: Way of the House Husband are available from libraries or your local book shop, both of which could use your support and are probably taking online or curbside orders.

While a lot of comedies out there rely on a bevy of humor and dig deep into the styles to bring new jokes to the audience, both Komi(-san) Can’t Communicate and Gokushufudou rely on one-joke conceits to keep the audiences engaged, entertained, and coming back for more. But does it work?

Gokushufudou: Way of the One-Note Comedy

I adore Gokushufudou, Way of the House Husband. Its main character is charming and endearing and has me regularly and audibly laughing as I read.

But, as put by my favorite reading advocate: you don’t have to take my word for it. Just watch this promo video for the manga. Even without proper English subtitles, it’s pretty clear what this manga’s single gag is.

In case you’re not keen on watching a four-minute video that some Internet Stranger threw at you), the central conceit of Way of the House Husband is this:

A retired Yakuza hitman now lives as a stay-at-home husband, which he treats with the exact same deathly seriousness as a mob drama.

That’s it. That’s the whole series.

Every single joke the manga has ever told for its fifty chapters so far stems from “thug does housework”.

And yet Gokushufudou has a fervent following online, sells millions of copies and has an official English release.

So what’s going on here?

It’s not like this is the first manga to thrive by hammering on a single point. It’s become something of its own genre in anime. Some new show each season revolving exclusively around a form of “this same situation keeps repeating itself to comedic effect”.

(Those examples are overly-reductive, of course, but you get the point; some series will really wring a gag for all it’s worth.)

And it’s not like it’s even a feature particular to manga. Tom & Jerry and Wile E. Coyote were typecasting themselves way back in the 1940s, and they’re basically evergreen because of it. That kind of longevity doesn’t come in spite of a stale joke. It comes from that core being so strong that you can twist and turn it until it’s inside-out. And the darn thing still works out of sheer silly-putty resilience!

Likewise, Gokushufudou has something of a joke that bites at both ends:

It’s exactly the kind of central concept that you can spin so delightfully from either end.

House-husbandry is obvious enough. The very fact that it’s playing on the deceptively-broad field of “the mundane day-to-day” gives Gokushufudou a wealth of options to cycle through. From grocery shopping to child-sitting to balancing budgets. It could be hundreds of chapters before the author runs out of G-rated topics to inject with an R-rated intensity.

But that’s all still pulling from the same side of the joke.

So every half-dozen chapters or so, the author flips the table and starts from the mobster end. Gives us just a whiff of a backstory, like a gag series might finally be developing a serialized story, as these things tend to do after a while. But just as we get a visit from an old boss, or former enemies come in with knives drawn…that boss turns out to be just as retired and domesticated, or our main character disarms the whole situation with some freshly-knit gloves.

It’s regular enough that you can see the pattern just as well, sure. But by cycling the reader through just a few different patterns, it strikes that crucial balance between a comfortable familiarity and a pull of which wacky situation is on tap this week.

So that’s how one manga gets away with a supposedly-narrow thesis.

It shares a similar problem on its surface. Much like a long list of light novels I might name, its entire premise is contained in its title: Komi(-san) Can’t Communicate. Or, as a fuller thought: “The class’ star student is too deeply awkward tho speak with her classmates.”

So you have a manga that stretches over hundreds of chapters and well over a dozen volumes. Yet Komi-san has a pretty simple joke at its core. And it’s not even a twist one way or the other in the same way that Gokushufudou can claim. After all, social anxiety is far from a straightforward issue. It’s not exactly a way to reverse expectations on most situations. Komi-san still manages to stay arguably even more fresh with a few years’ head start on exhausting its material.

And once again, it’s all in the formatting.

For one, Komi-san chapters are short.

Alarmingly short. A running count of over 250 chapters as of writing can be a little misleading. Especially when those chapters are routinely between three and eighteen pages. For reference, most manga, even ones that aren’t particularly story-heavy, tend to hover between 30 and 45 pages per chapter.

And, to be fair, Gokushufudou similarly clocks around 18 pages per chapter in its first volume. But even that gives it a sense of regularity and routine.

By comparison, Komi-san feels like it knows when to let a joke rest. If a deeply-episodic comedy is bound to a dozen pages per installment (or, say, twenty-one minutes of airtime), the material may have to be stretched to fit that runtime. If the author of Komi-san feels like a specific idea will stop being funny on page six, that chapter will only last six pages. And it’s that kind of self-control that helps keep the manga from becoming stale.

Now, it doesn’t hurt that Komi-san is keying in on social anxiety as a core theme, something felt so widely that it’s at once relatable in a protagonist and cathartic to be able to get a sympathetic chuckle about. Leaning into that sort of awkwardness while neither condemning it nor writing it off as just a cute character tic is going to earn a lot of brownie points from a lot of readers. But its treatment of emotional stuntedness is both well above my ability to tackle in any real depth and also not a direct part of how it’s fixing the “wash-rinse-repeat” joke cycle.

One of those more structural things that does help Komi-san break that routine is that it plays with the “narrow concept” format a bit. It’s not exactly playing with just variants on the one joke, per se. It’s working through about a dozen individual jokes.

Which is admittedly a bit of weird phrasing, but it’s also a fairly apt description of the manga’s approach. Of its ever-growing cast of characters, each one is defined a single personality trait that they embody to its logical end. So you get Komi-san can’t communicate next to Tadano is uncannily average and Is Katai a thug? and so on until you’re rattling off a laundry list of absolute stereotypes.

But Does It Work?

So while you get a few chapters at the beginning for the core joke to fly solo, the writer comes in and puts more wind beneath it before the momentum can peter out. You get a few jokes with how the titular Komi plays off of the nearly-as-anxious Agari. Then a few chapters later, they mix in the overly-possessive Yamai.

By chapter thirty, it already has a healthy rotation of mix-and-match traits that are all deathly predictable. You always know exactly how a conversation will go based on which two characters are in-panel. Bbut they cycle in and out often enough so as to keep the pot perpetually fresh.

There’s even a point some way into the series where the author basically brings in an entirely new cast to pick on different one-note characters for a couple of years.

And the end result, much like Gokushufudou, is just familiar enough to keep the reader on the hook while not being so familiar as to lose them. It’s a tricky balance, especially without any obvious narrative draw to pull you back from chapter to chapter. (Well, there is a minor will-they-or-won’t-they, but shoujo manga and magazine-style publication has made clear to readers by now that kind of plot can and will continue indefinitely.)

It’s a testament, especially in Komi-san‘s case, that these things can keep churning out chapters for years while still trying at least in part to be written with a normal comic-page layout. It’d be all too easy to rattle the same stablel of gags off like a four-panel funny-pages strip. After all, Hidamari Sketch and Monthly Girls’ Nozaki-kun and Calvin & Hobbes do this thunderous success.

But instead, each pulls some clever tricks to succeed in a format normally reserved for something more dynamic and dramatic. The stories bring us in that little bit more and use that space to really emphasize their core strengths. Just so they can give us the same, good ol’ honk of the nose, time after time.

What do you think about Komi-san and Gokushufudou‘s one-joke comedy style?