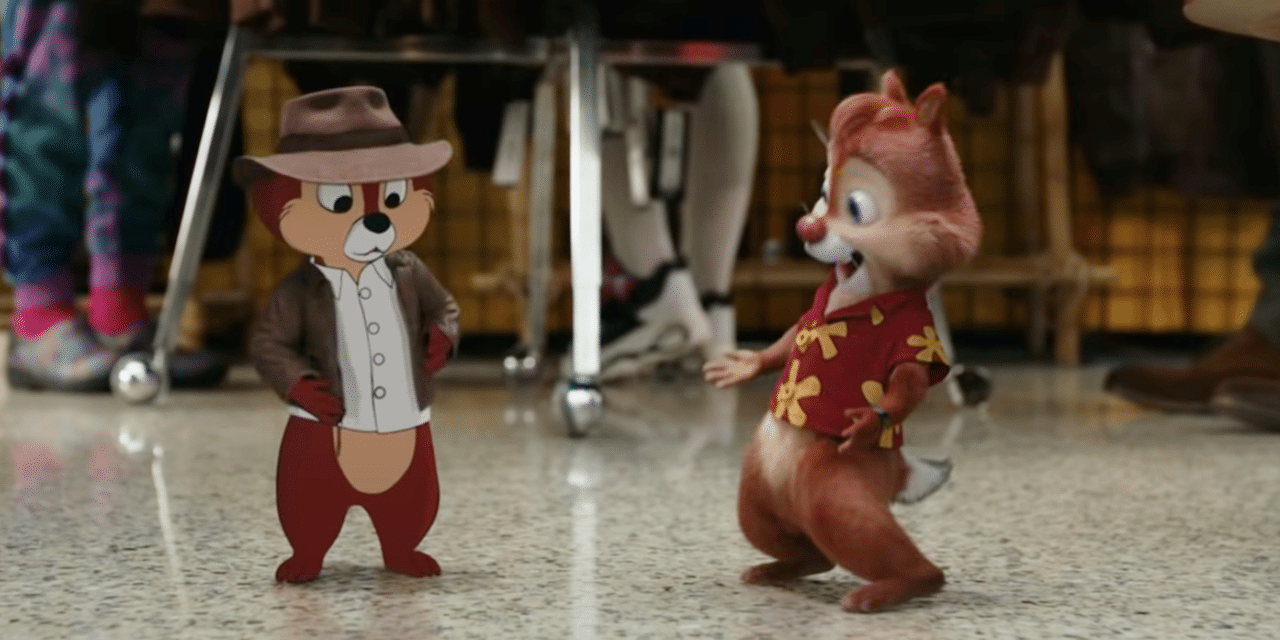 Chip ‘n’ Dale Rescue Rangers is available on Disney Plus.

If I told you that a Danger Mouse movie was coming out next week, you’d probably be able to picture it already. The titular hero, probably voiced by Ewan McGregor, would be a six-inch-tall CGI creature in a live-action buddy comedy with an affable audience surrogate. Opposite them would be a well-known actor, playing a character named Greenback but probably looking very little like an actual toad and out-hamming every hog in the tri-state area.

There’s a bit of a song-and-dance to these nowadays. Alvin & The Chipmunks did it four times. Sonic the Hedgehog technically did it, for how well that turned out.

But luckily, the Rescue Rangers dodged that particular bullet.

Slipping Through the Cracks

To be clear, 2022’s Rescue Rangers isn’t must-see film, and I’ll be the first to say so. Heck, it barely runs in the same circle as Roger Rabbit, the thing it’s most clearly trying to emulate.

Because, ultimately, it still leans into some obvious steps you see in every other thirty-year-old property given the Hollywood reboot treatment. Big on-screen personalities – rather than voice actors – head up the cast, and they do play opposite human characters. The movie squeezes some easy fish-out-of-water comedy from this, like a mouse’s “high-rise” being barely higher than a cat tree.

But gosh-darnit, I’ll probably still remember it next week, and that’s more than I can say for The Smurfs.

And yes, a big part of that is that Rescue Rangers was my go-to Disney Afternoon ‘toon, so I’m biased.

But an equally-big part of it ain’t.

Picking Up the Slack

The thing that works first and foremost is that, of the ten-or-so characters important enough to have names, one plays a live-action character.

And that means that, believe it or not, it gets to double down on the reason why I love watching the cartoon – namely, that cartoons are effortlessly fun, and we get to see them bounce off each other from the word go.

I never once felt bored by an excuse to slot animated chipmunks into modern-day Los Angeles, or check up on Neil Patrick Harris’ human subplot. In fact, their nemesis Fat Cat only shows up indirectly, leaving the script free to go with antagonists that both feed some goofy antics and – get this – help tell a coherent story.

Side note – the live-action Sonic sequel is currently the best-performing video game movie of all time, and easily its most boring twenty minutes are focused on humans not named Robotnik. Draw your own conclusions there.

Which I suppose you could say for a few of the other cartoon-to-live-action “adaptations” that we dread. I mean, “coherent” and “by the numbers” fit the same bill, after all. But the saving grace, probably the most obvious zinger about the movie that I still somehow haven’t mentioned?

It’s that Rescue Rangers has stuff like this in it:

The Wheres and Whys and Whos

More than anything else, Rescue Rangers is kind of just a celebration of stuff we love – or at least know. And, better yet, some with an uneven sort of humility around it.

Yes, part of the story revolves around meta-references to the original cartoon as it exists within the movie’s showbiz setting. But there’s at least three points where it almost directly calls out that it wasn’t especially popular as the crow flies, and that this is almost a property running on fumes.

So it brings more into the fold, until the movie just becomes about throwing spaghetti at the wall until it sticks – the other strength of a weekday-afternoon ‘toon.

You think claymation is cool? Great – there’s a whole character about that. Don’t care for it? Neither do I; but he’s used in such wildly inventive ways, from stretching to breaking to picking up fingerprints, that I enjoyed every minute that he’s on screen.

And the movie is chock-full of that stuff, in the same way Into the Spider-Verse parades through a million and one thoughtfully-conceived animation tricks. Except here, instead of that being the world’s greatest stylistic choice, it’s a core that the whole movie can spin out of, from its perpetual gag engine to the story at its backbone.

Again, we’re dealing with the 2022 equivalent of a straight-to-DVD movie here; we’re not talking about the kind of invention to set an industry on its ear. But that means there are whole unique trains of logic departing from their ToonTown that they barely spend a scene on, but make for great “what-if” scenarios to stick in your craw.

I can hardly say that for any other animation-to-live-action revival I’ve ever seen.

It has a bit of that Hollywood adaptation energy of forcing a peg into a hole. But thank goodness this is at least a wonky, trapezoidal hole that I haven’t seen a hundred times before.

Most of what I’m getting at is, Rescue Rangers had every reason fall into the boring formula I wrote it off for before its trailer. To retrofit things and make itself “more palatable to general audiences”.

But one of these movies actually made a swing over the fence for once.

Did it quite get there? Eh, not so much the point.

What it did do is create a live-action cartoon that I was actually excited to watch with people. That can carry a conversation further than “isn’t Bill Murray a funny guy?”. It took even a modest amount of risk, and whether or not it objectively pays off, it finally pushed one of these movies in a direction with its own personality.

Chip ‘n’ Dale to the Rescue.