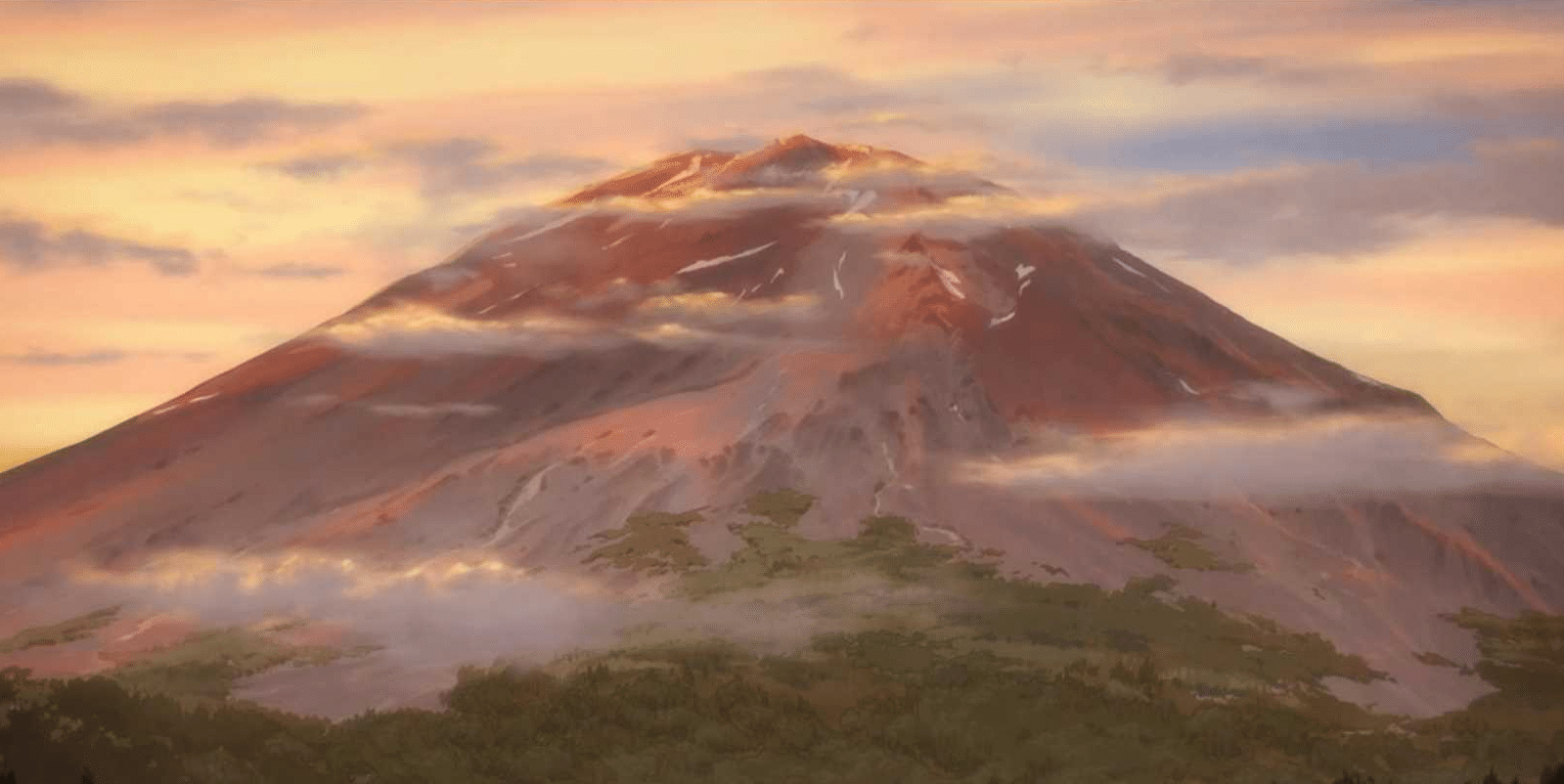 [Keywords] Super Cub and The Mountain

Super Cub is available to stream on FUNimation.

I can’t stop thinking about Episode 5 of Super Cub.

The funny thing is, normally Super Cub isn’t something I think about much at all.

It’s a dreadfully simple premise: the main character, Koguma, buys a motorcycle for cheap, and her life is all the better for it.

That’s it. Every storyline in the show is a tiny little expansion on Koguma’s relationship with her Honda Super Cub, from using it for courier jobs to learning care and maintenance to how it helps her connect with her classmates for the first time.

Charitably, it’s the very definition of a “slow burn” show. Less charitably, it can be a “nothing really happens” show.

That’s the sort of anime I tend to love the most, though.

Yes, even with the very aggressive brand deal at Super Cub‘s core.

There’s no complicated plot I have to wrap my head around when I’m watching something like this, or Yuru Camp, or Non Non Biyori, or any number of slice-of-life stories. Sometimes they’ll hit a pocket of information, like when classmate Reiko starts gushing over engine modifications, but usually that just washes over me. It’s not what I’m there for.

I’m there for the slow moments, and for the atmosphere. For the wonderful instances of restraint where the show goes a minute at a time focusing on a single vignette, with no dialogue at all. I feel so much more connection with a character that way; a quiet scene following Koguma’s morning routine gives the most earnest view possible of what she devotes her care and attention to.

But sometimes, show-don’t-tell screenplays give us a story that lingers far, far longer than the writers may have intended.

I intend to spoil the entirety of Episode 5 of Super Cub following the below image, and a little of Episode 6. Be forewarned.

Reiko’s Summer is a prime example of my favorite archetype of TV episode: the Day in the Limelight. Take a side character, and let the episode revolve around them rather than your Regularly Scheduled Protagonist. It can be tricky – some characters just don’t have the depth to carry as interesting of a story, or stay interesting precisely because they’re vaguely-defined.

Luckily, the chipper mentor Reiko is every bit as nuanced a character as Koguma, our charming fledgling. And that means she’s loaded up with her own baggage as the resident self-sufficient expert in motorcycling (and Super Cubs in particular).

For those who haven’t seen it, the framing device for Reiko’s Summer is as follows:

Reiko invites protagonist Koguma over for dinner at the end of summer break. While chatting, Reiko regales her with the story of her summer job, working to resupply bases at the foot of Mount Fuji. The real reason she took the job, though, was the duty of checking the trail for obstructions before sending up industrial-size vehicles – the exact kind of thing a light motorcycle is perfect for.

And each day is a new, convenient excuse for her to try and summit the mountain, solo, on her Cub.

An awful lot of screen time is spent on Reiko’s dogged attempts to climb the side of Mount Fuji, seemingly with the self-imposed restriction of making it without wiping out.

And on how she fails.

And harshly. To the point that the animators seem to revel in it.

There aren’t even any fancy slides or quick movements in Reiko’s climbs – just arduous, determined navigation. Every moment is a struggle, right up until she inevitably slides into a tumble after pitching against some stray rock. And each one not only leaves her with bruises, but accrues a new scar on her motorcycle that steadily brings it from “well-loved” to “on its last legs”.

Really, it’s a marvel that Reiko herself doesn’t tumble down the mountainside nor walk away with a broken bone. Super Cub may be (mostly) insistent on showing characters following safety guidelines, but this is firmly in “don’t-try-this-at-home” territory.

But Reiko insists, to the point that her supervisor has to take her aside and give her a stern talking to. To wit:

You can’t stand yourself up to the mountain. You have to bring yourself alongside it.

And here’s where the beef with Reiko’s Summer starts.

Ordinarily, when main character Koguma has a moment of clarity or joy, the show undergoes simple but effective changes. The soundtrack changes gears a little bit. Her face seems to gain a bit more detail. And, crucially, the show’s color palette saturates. The normal day-to-day grey of her life gains color, and it’s a little cheesy, but it’s enough to lift the spirit.

That doesn’t really happen after Reiko hears her supervisor’s wisdom.

Her next push up the side of Fuji feels the same as it ever was. The rock-inspired background music is still there. She’s still as leery-eyed as ever through her visor. And the trail is still pitched in a dour, foggy grey.

All signs point in one direction: Reiko may say she’s not treating Fuji like an opponent any more, but she’s still assaulting it like one.

She has yet to internalize those words.

And so, of course, she pitches backward off the Cub, failing as badly as she ever has.

She didn’t “lose the competition but gain a friend”. She seemingly didn’t even learn something new along the way. Nothing was gained here besides a story to tell over dinner.

At least for now, Reiko’s day in the limelight ended in failure.

Here’s the crux: I still don’t know what to make of this whole parable.

Reiko failed to learn her lesson despite trying to proclaim so. When we return to the two girls gabbing in her cabin, she doesn’t even have a proper response to the accusation that the whole endeavor was “silly”.

Ultimately, though? That’s fine. Living on her own or not, Reiko is a still high school student, no older than seventeen. She punched above her weight, and she got knocked back down – the way “David and Goliath” stories tend to actually play out.

But this time, at least, it was a resigned loss, not a frustrating one.

Maybe, just a little bit, she’s actually brought herself alongside Fuji. It’s bigger and more powerful than her, and bounces her away. But with just a little bit of humility and perspective, that’s obviously the expected outcome, anyway.

And an expected, failed outcome still isn’t an inevitable one.

People should be allowed to utterly fail, anyway – especially fictional ones.

By the time we hit credits, Reiko seems to have at least internalized that much. Which lets her reach the most important step:

She ate dirt, and now she has to eat the larger consequences. Motorbikes can be rugged, but they’re hardly invincible; ultimately, she abused hers. Its nearly totaled, and she has to dig deep into her pockets to replace it. You don’t repeatedly throw yourself at a wall like that without getting a concussion.

But Reiko hasn’t lost her fire – she still intends to summit Fuji on a little underbone motorcycle, as ridiculous as she personally knows that is. But at least she’s moved a little bit away from the aggressive framing. Now, it seems more like an inevitability to her; it’s been done by others, and she at least knows how not to do it next time. She’s been given half a clue, and has to figure out how to properly unpack it.

Then, sometime not too far from now, she can make find a way alongside the mountain.

She has a whole life to spend learning, after all.