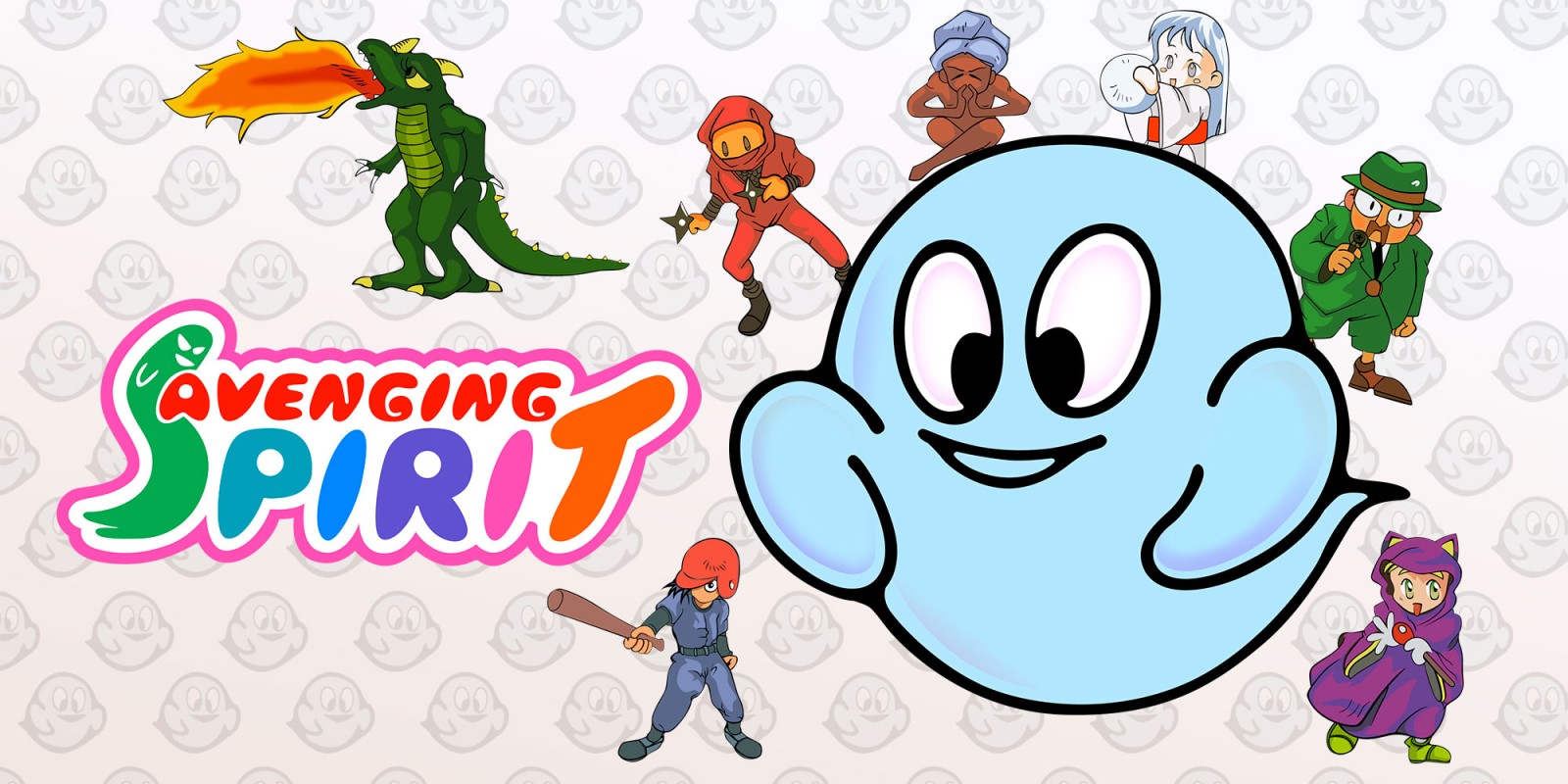 Avenging Spirit is a retro Japanese arcade game that plays like a traditional action-platformer with a unique twist, allowing you to possess enemies.

Jaleco wasn’t one of the more prolific arcade publishers of the ’80s and early ’90s, but they did manage to release a handful of gems such as City Connection (1985), The Astyanax (1989), and Avenging Spirit. The latter, which was released in 1991 to little fanfare, was a creative action-platformer that came and went. An “enhanced” Game Boy port was released the following year with rebalanced difficulty, but that was shortly forgotten as well. Now, over three decades later, publisher Ratalaika Games is giving Avenging Spirit the respect it deserves.

Being an early ’90s arcade game, Avenging Sprit doesn’t have much of a story. What it lacks in narrative, however, it more than makes up for in weirdness. You play as… some dude… who, while walking with his girlfriend, is ambushed by armed goons. Dude dies, girl gets kidnapped. Smash-cut to dude, who is now a cartoonish ghost in a tank, being told by his girlfriend’s scientist father that the armed goons were part of a secret society who are now holding ghost-dude’s girlfriend hostage in exchange for her father’s research on ghosts. Our ghostly protagonist must use his spectral powers to possess enemies and rescue his girlfriend.

How Does Avenging Spirit Play?

Avenging Spirit might look like any other 2D action-platformer from its era, but it has some very unique mechanics. Upon starting the game, the ghost floats about as its energy gauge slowly depletes. If you run out of energy completely, it’s Game Over. With only two buttons – action and jump (ghosts don’t jump, bro), it doesn’t take too long to figure out what to do next. Hover over an enemy, press the action button, and voila! You are now in control of the enemy!

Possessing an enemy removes a chunk of your spectral energy, and your newly-possessed character is given their own health gauge. If the possessed character runs out of health, you return to ghost form to seek out a new host. With over 20 possessable host characters, there is a lot to experiment with.

A Short but Sweet Arcade Experience

Don’t expect a full session of Avenging Spirit to last longer than 30 minutes. With six stages, each with its own boss battle, you can (literally, if you want) fly your way through the entire game very quickly. The less-imaginative player can possess “not-Metal Slug guy” and jump and shoot their way through the game with ease. But where is the fun in that? As a traditional quarter-muncher, the game encourages you to try other characters by, well, killing you quickly. Even with the occasional health/energy pickup, a single credit will likely not last more than a few minutes after the first couple of stages.

This port allows you to add unlimited credits, so give as many hosts as possible a try! Armed soldiers run ‘n gun, but have limited mobility. Fighter girls are fast and mobile, but have low health. Dragon-men are slow, but breathe deadly fire. Some hosts even bring more complex mechanics to the table. A yogi-like host can meditate and float about by tapping the jump button, and a folklore-inspired snow priestess can roll several large snowballs at foes. For a real challenge, try using the baseball player to bat projectiles back at enemies.

Even considering the variety of hosts, it won’t take long to get through the entire game, but there are thankfully multiple endings. A couple of stages in, it is revealed that the protagonist’s girlfriend is held behind a door secured by three locks. The keys are scattered about the stages and become increasingly difficult to locate. Seek out all three keys to achieve the “good” ending, or leave your girlfriend behind – the choice is yours.

Avenging Spirit lives up to the reputation of ’90s Japanese arcade games with plenty of large, detailed character sprites. Character art looks ripped straight from the pages of a manga, adding a lighthearted tone to a strangely morbid premise. Animations are appropriately fluid, with each enemy/host exhibiting their own physical quirks. I especially admire little touches such as an enemy ninja mounting a gigantic toad as he is being possessed.

Music and sound effects are… adequate. The limited musical compositions are catchy-yet-repetitive, but don’t become too annoying due to the game’s short length. Sound effects are as loud as you would expect from an arcade game fighting to be heard over a dozen other noisy cabinets. They do their job, and nothing more.

Ratalaika Games has been doing an excellent job of re-releasing forgotten ’90s classics recently, gussying them up with a bevy of modern options. Avenging Spirit is no exception, granting players the ability to rewind gameplay with adjustable speed when things get too hectic for starters. This feature is somewhat negated by having unlimited credits, but provides a simple way to “try out” a host without committing to the possession. There are also DIP Switch, Control, and Video options, along with the ability to create multiple save states. A two-player option is present, though players have to take turns rather than play simultaneously.

Rounding out the package are two alternate versions of the game. A home-friendly version adds additional difficulty options and excises the need to add credits. The Japanese version of the game, titled Phantasm, is pretty much the exact same game but with Japanese text in the cut-scenes, but it’s a nice addition nonetheless. Sadly, the Game Boy port isn’t included, which is a shame for multiple reasons. The rebalanced difficulty makes it a more enjoyable experience, and the physical cart is also an exceedingly expensive collector’s item. The Game Boy version is available for the 3DS Virtual Console, but you’d better nab it quickly because it’s going away soon!

Avenging Spirit might not be one of the very best action-platformer arcade games, but it is absolutely one of the most unique. Ratalaika Games should be applauded for making it (and other gems) available to a wider audience at the affordable price of $5.99. That’s a fair price for a weekend of throwback fun and a glimpse of a fondly-remembered era of arcade video games.