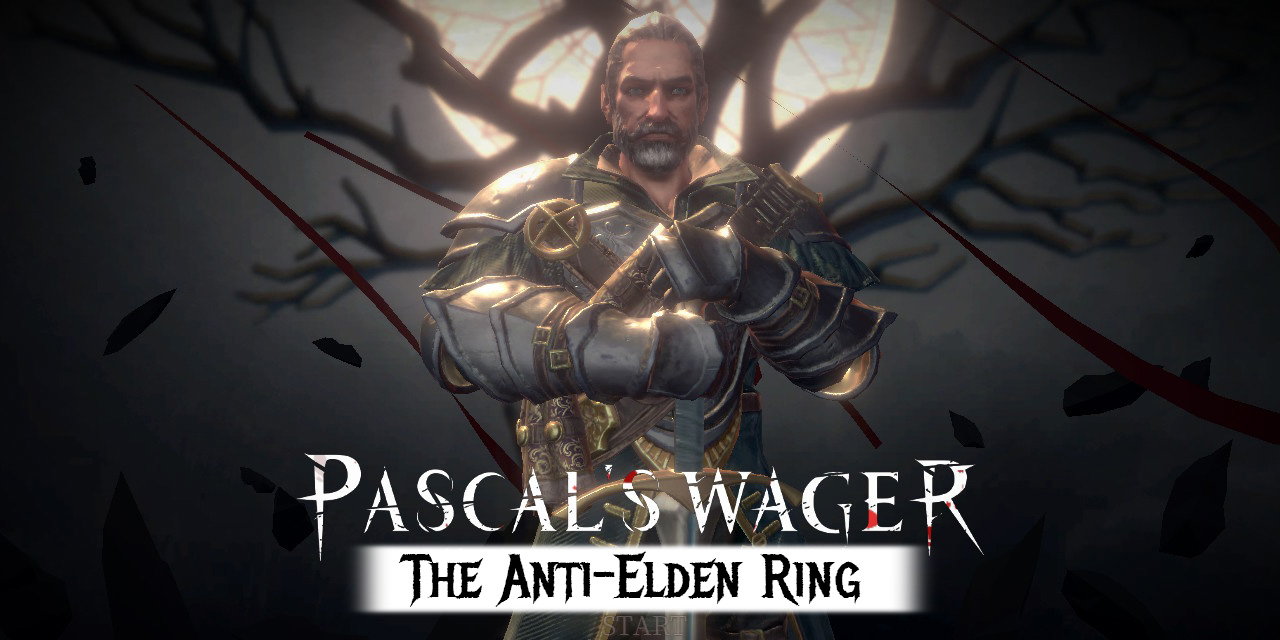 A mobile take on the Dark Souls formula becomes a surprisingly fun Soulborne alternative in Pascal’s Wager: Definitive Edition on the Nintendo Switch.

Before this year, I had zero interest in the Dark Souls franchise, and even less in games that were described as “Souls-like”. To me, that just meant a game was punishing, obtuse, and grim. Then, when everyone was talking about how great Elden Ring was I dipped into Dark Souls Remastered, and then played through Bloodborne and Dark Souls II. I was totally hooked and can’t shake these sorts of games! I’ve already got Dark Souls III purchased and installed, but decided I wanted a palette cleanser, and that’s when Pascal’s Wager: Definitive Edition dropped into my lap.

I think I’m nearing the end of the main story of the Switch port of Pascal’s Wager, and I’m really, really digging it. This game isn’t quite as Souls-like as it looks, but I’ve found a fairly linear game with cool level design, varied combat, and nightmare-inducing enemy design.

The main playable character and driving force of the plot in Pascal’s Wager is Terrance, a white-haired man who travels the world with a white-haired female apprentice and a job title that seems to be synonymous with “killer of monsters” while he tried to track down his love interest turned existential threat. He’s not a Witcher though; he’s a Courier.

There’s a lot of lore in this game, and I’m sure somewhere along the way there’s been an explanation for what exactly a Courier is. However, even though there are a lot of voice-acted cut scenes, most of the plot has washed me by. All I know is Terrance travels from town to town in an awesome carriage piloted by a spirit that often turns into a crow. He stops in each town to stomp out monsters and yell about his missing wife like so much Harrison Ford. Along the way, he levels up by sacrificing the remains of his enemies at altars and recruits new allies to his cause.

The plot is fine and the writing is passable, it’s just never really hooked me. I do kind of love the voice acting, though… even if I’m often loving it for its campiness as much as its quality.

Thankfully, the action and the level design both hooked me way more than the story did. Pascal’s Wager is divided into a series of distinct levels, which you have to jump back into your carriage to travel between. Each level is a twisting labyrinth through a different town. They are all grey and grimy and full of monsters, but at the moment there’s a good amount of distinction between each one.

Like Dark Souls, a lot of the sense of progress in Pascal’s Wager comes from finding keys or elevators or ladders that you can use to create a shortcut back to the last checkpoint. This is crucial because enemies can hit hard and fast. Most of the time you venture out with a “party” of Terrance and one other character, though only the one you are playing as is actually on screen. Outside of a fight, you can switch between the two characters in preparation for your next encounter. In a fight you’ll switch over to your backup when you die, giving you an extra life of sorts.

When you stop in at an altar you can heal up and cause the enemies around you to respawn. You can also customize your character with a variety of different trinkets. Enemies’ remains are sacrificed for straight-up stat increases, like so many souls. Then you can also equip different relics for combat boons, and can then sacrifice unused relics to boost those benefits. There’s also a skill tree per character where you can use a whole other collectible to modify stats, abilities, and the healing potions that are for sure not filled with Estus.

Okay, fine, there’s a lot of Pascal’s Wager that borrows from the Dark Souls formula. However, the relatively small and disconnected levels give the game a different sort of feel, and the story actually being told to the player in the game instead of in a tidal wave of YouTube theories is refreshing.

On the combat side of things, each of the characters you unlock plays just a bit differently. Terrance wields two swords with a light and heavy attack, a dodge, and a block. His protégé wields a bayonettaed blunderbuss and can dodge much faster, but has no block to speak of. A big hulking masked man has a horribly slow dodge but can use the coffin chained to his back to block almost any blow.

The variety is really fun to play with, but it’s a bummer you can’t actively switch characters in the middle of a fight. Being able to use your two party members to chain combos together would be outstanding. Also, the combat is always slow. Even with the characters who dash more than they dodge, the pace is slow and thoughtful, rather than Bloodborne-like aggressive.

The neat twist on combat is that every time you engage with an enemy you lose a little bit of a sanity meter. When that gets low enough it triggers an effect that makes things just a bit harder for the player. Each character has a unique consequence, but no matter who you are using losing all of your sanity to a boss is a major mistake. Each boss has a second state that they enter when you drop to the “Lunatic” status. If you can manage to keep your sanity through a fight, you absolutely should.

The design of Pascal’s Wager feels like it pulls from Bloodborne a bit. It’s not quite Victorian, but the constant references to “The Church” as a ruling power help it feel like it falls somewhere between Dark Souls and Bloodborne. The enemy designs are all gross and grotesque in a really wonderful way. I’ve encountered people who have transformed into sunflowers, genuflecting horse-headed monstrosities, and a helpful NPC in an egg. There are weird frog creatures who will reward you for letting you eat your items. There’s a race of merchants that are like the cat people in Monster Hunter, except bald and awful.

The second town you visit literally gave me nightmares. Without getting too explicit, some sort of being arrived in town and coerced the people into worshiping him as The Holy Father. Then he convinced the women of the town that they had to bear his children in order to preserve their bloodline, to the point that his reproduction became the horrifying obsession of the entire town. Every enemy in this area is designed based on that backstory and it’s really, really upsetting.

Overall, I’m really digging Pascal’s Wager. I never played or even heard of the mobile version of the game until I got my hands on the Switch port, but I’d wager it’s fantastic there, too. The slightly methodical combat would probably work great with touch screens controls, and the segmented world makes short gameplay sessions feel good. On the Switch, it’s fantastic. The game doesn’t look as good as Dark Souls Remastered, but it runs well with a good frame rate and very little pop-in, which is really all I want.

The loop of getting to a new area, encountering fresh horrors, getting stuck on a boss, and then coming back after a break and destroying them is great. If you’re looking for a bit of Soulsborne in a more straightforward and story-focused package, then Pascal’s Wager: Definitive Edition is a safe bet.

Geek to Geek Rating: 4.5 out of 5 Sacrificial Souls