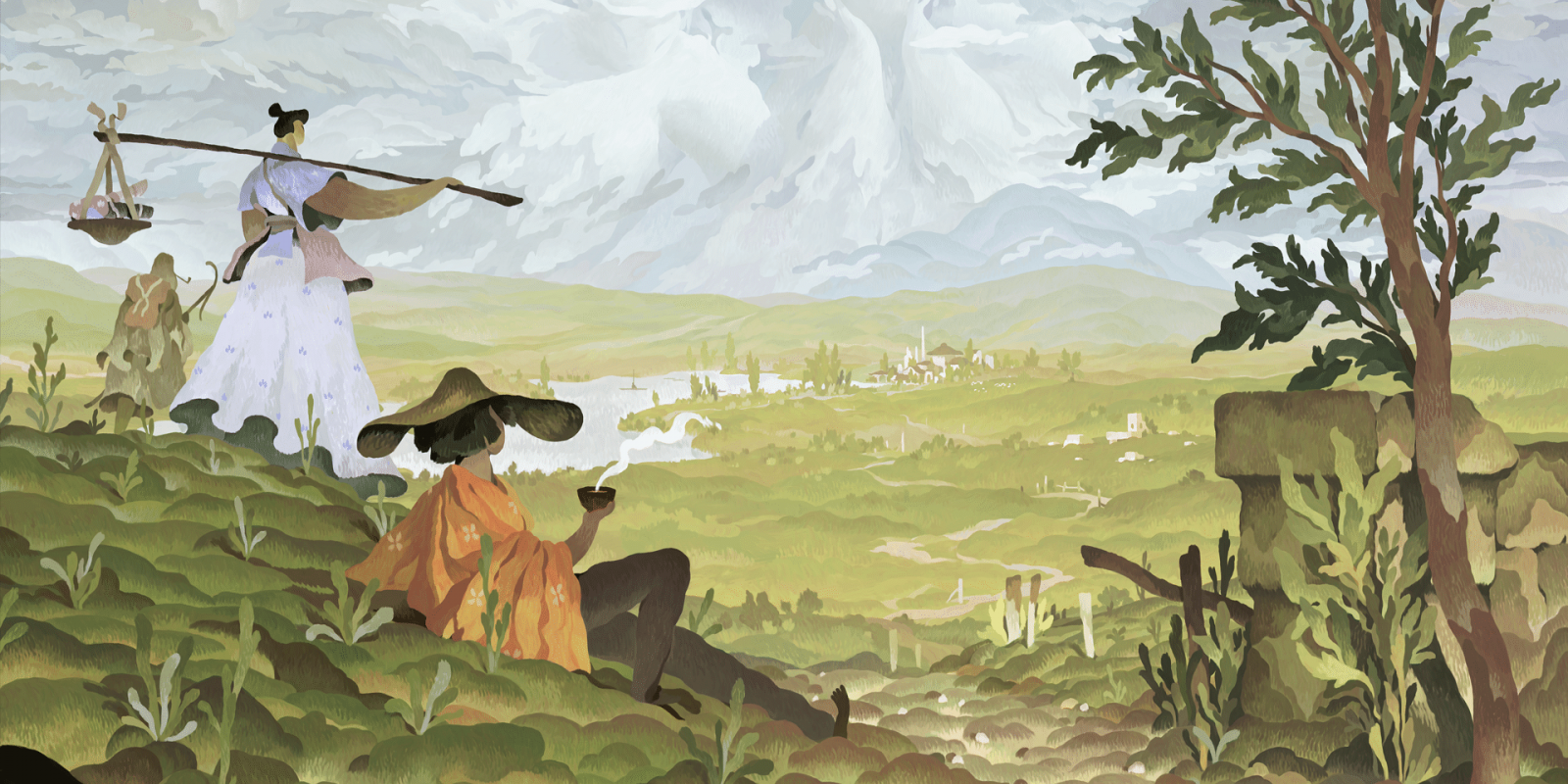 A code for this game was provided by Might and Delight.

I’ve been playing Book of Travels for days now, and I’m still not quite certain what I’m supposed to be doing in it.

My character has trekked over a whole peninsula – and its outlying islands – largely on foot. She’s traded knotted ropes for a recipe on spiced tea. Learned to read a once-foreign language.

And only one of those felt like I was led to it. After the inaugural hour, I’ve been ambling my way through its world with hardly an end goal in sight.

But I’m loving my time with it all the same.

Book of Travels sells itself as an “Atmospheric Online RPG”, and to be frank, I can’t really think of a better thing to call it. My experience mingling with the early-access playerbase hardly paints it as “massive”, and neither does it have the defined mechanics or endless questing associated with a persistent multiplayer games. Instead, it’s stripped down to that core that oh-so-many cite as a hook into other MMOs:

Book of Travels defines itself as much by what it omits as what it contains. And what it omits, mostly, is explicit answers.

The first step of any role-playing game is character creation, and the process here feels more like a tabletop role-playing game than in most video games. Except here, it goes even further, with your character’s “form” and upbringing and even the shade of your iris described through flavor text rather than as a +5 to a statistic.

You see that text box in the lower-right below? The game very much expects you to be creating a concept rather than picking a stat spread. It’s a very different mentality, especially given that you’re committing to a build with little context.

And after that, they set you loose. There’s a nudge toward an early-game “quest” – nothing that the game tracks for you in an itemized journal – but within the hour, you’re asked to make your own fun. There are some suggestions, but the game is very open as to how to pass the time. You can scavenge the wilds and barter with merchants. Or try to document every major landmark along the Braided Shore. Perhaps see if you can’t coax a passing traveler into helping you repair an old temple mechanism.

But the game’s verbs are almost as tightly-limited as its emote-driven communication system. All in all, playing Book of Travels is as much about simply being present in its painterly, diorama-like world. Experience comes everywhere – from exploring, from trading, and even just from conversation. So whether you’re a cross-country sightseer or growing your tea-brewing repertoire, it’s up to each player to find their own motivation.

And yes, there is a “fight” option in this game. But you’re never once required to touch it, and swords are an expensive purchase besides. It’s there on the side, to maybe have a bit of as a treat – though, like in real life, the risks are dire.

To its credit, going for a lower-key, mechanically-light gameplay loop helps other elements of the game shine through.

For example, the presentation – easily the shining star of the game. Its pan-Eastern flavor, heavily-textured art direction, and penchant for prose are all what caught my attention to begin with. Despite being a smidge difficult to parse at times, it hasn’t stopped charming me yet, especially not when backed by a scene-setting score and just the occasional dash of magic. It both draws in from elements I’ve seen before, and feels very much like a land all its own. Which, as it so happens, is exactly the kind of place you’d want to explore.

And since the game is so big on self-driven exploration, it feels all the more natural for your brain to fill in the blanks in your character sheet as you stroll down the main road. In most games, role-playing elements feel meant to inform why you roll a die or swing a sword. Here, where half the game feels like empty space, they’re on a more equal footing.

Perhaps that’s just how my brain is geared, to spin up a reason why my mountaineer might have traveled so far just to scrounge for dandelions rather than totally space out during the downtime. But if that’s your bag, Book of Travels will certainly oblige you with the opportunities for it.

There’s a whole school of thought as to whether elements outside a game should affect our opinion of the game itself, but I wanted to note here all the same:

Book of Travels has a very dedicated community.

You’re not obligated to engage with it, of course; you’ll do fine enough just emoting to strangers. But with the game’s often-vague NPCs and some mechanics left implicit, there’s a regular buzz of players online, trying to collaboratively discern what makes this world tick. How does time pass? Does a person’s eye color affect them in a measurable way? What’s the in-character reason for the travel embargo past Obo’s Blade Pass? All opportunities to sit around the digital fire and have a chin-wag.

As to other elements not quite in the game yet, the developers at Might and Delight have a declared long-term plan to support this game. Areas and character archetypes to be revealed over time, additional gameplay effects to fill in, and more and more story threads to weave in on top of those already present. So the current state of the game is by no means its final state.

On the other hand, this means that things may feel a bit lean. As of writing, many character traits bear a note of “not yet implemented”. The sparse inclusion of quests feels as much deliberate as it does something not-yet-fulfilled.

And bug-squashing is an ongoing process. While the developers are gracious and communicative, I still found myself trapped in the bay after falling through the floor of a ferry – twice. I have no doubt in my mind that its technical issues will be ironed out in the fullness of time. But at launch, they’re still present, causing me the occasional mental mis-step when I’d otherwise be fully engrossed.

If you play Book of Travels, you’re likely to have one of two reactions:

And that will tell you immediately whether you’re likely to fall in love with the painterly charm of the Braided Shore, or bored to death by it. Like a cup of bitter tea, Book of Travels is aesthetically gorgeous, but decidedly “not to everyone’s taste”. And, in all fairness, I’m probably predisposed toward its brand of non-gameplay. I do love hikes in the wilderness and stories where very little happens.

To that end, my giving a score here is purely out of tradition. I would handily label it one of the most unique gaming experiences I’ve had all year, and am itching to get back on its dusty roads. You may find that this all sounds like the last thing you’re interested in, and I could hardly argue. It’s a difficult experience to pin down in an objective way.

But, if nothing else, Book of Travels has its sights on a horizon hardly-traveled by other games, and I think that’s worth tagging along for.

Geek to Geek Rating: 3/5 – Your Mileage Will Vary