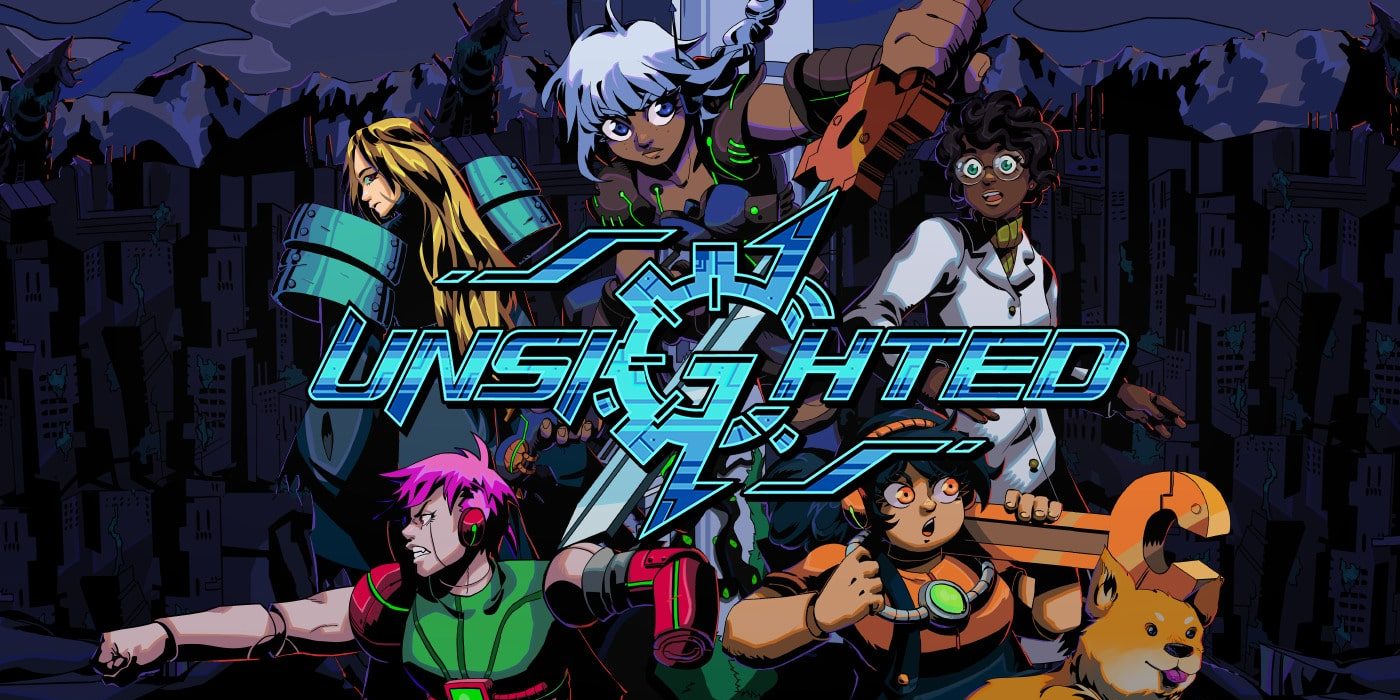 A code for this game was provided by Humble Games and Studio Pixel Punk.

I love me a good cyberpunk game. Doubly so when it’s coming from a small creative team with a strong vision.

And that’s exactly what Unsighted is, from start to finish.

That’s not all that it is, but it’s a solid foundation for a tight ten action-packed hours of story. Every moment playing, it feels like a well-tuned machine, each piece serving a specific function. From the depressive setting and moody soundtrack down to the snappy swordplay, it can hit you with any number of hooks and let the rest keep you on the line.

It wouldn’t be unfair to say that a lot of Unsighted takes inspiration from older games. The whole map is a series of sprawling, interconnected rooms with certain barriers in place and a running tally of map completion. You delve into six dungeons with a somewhat-loose order, each granting one item for use in overcoming traversal puzzles. Then you go back to town and hit the weapon shop to cash in your chips for a sharper sword.

Unsighted is one of those games that, while not totally beholden to them, feels aimed at lovers of now-retro action-adventures. Even its art style is built around elements that evoke the SNES and Genesis era, even if it’s unclear whether Unsighted would actually work on the hardware. But the letter of that law isn’t important; its spirit is, and boy howdy does this game have spirit.

It’s a synthesis of hardy, time-tested game elements that you might have seen before in a different context, with more than a dash of its own flair. A sprinkle of spice on top of the existing game knowledge that you likely already have if you’ve found it in the first place.

In fact, it assumes enough game knowledge that it had me turned around at one point. When you die in Unsighted, you drop half your currency – coupled with the rest of the game’s unforgiving nature, I assumed that was a hard penalty. What the game doesn’t tell you is that it’s left on the ground, From Software style, waiting for you to pick it back up, should you explore in the same direction twice.

The game is oddly inconsistent in its communication that way. In some cases, if you explore the wrong way, your cyber-fairy companion will chirp up with a “no no”. In others, I’m left delightfully free to navigate a railroad maze in the dark. And if you struggle with iconography, it’ll take you two hours to realize that the little sweat-drop icon next to a sword denotes how much stamina it uses per swing.

The game doesn’t have a ton of these hops in logic, I’ll grant you. But maybe it’s because the rest of the game is so seamless that these few hiccups stand out all the more.

While it may have a few gaps in catching certain players up, Unsighted gratefully does a lot of work to make sure players can at least keep up.

I’d wager Unsighted does a better job of providing accessibility than some high-budget, headline games that I could think of. It supports three of the four common game inputs with full remapping out of the gate – I don’t doubt that a Switch configuration is in the works. It allows you to resize text and convert between “pixel art” and “high-readability” typefaces before you ever get into the game, where most games would lock you in.

And, in a very important nod, Unsighted has its own version of the much-praised “Assist Mode”. While it locks a few achievements and knocks your save file status down to show the lowest difficulty, it also lets you choose which levels of the game you want to engage with. For example, you can tune combat difficulty, stamina use, and invincibility options separately, or leave those alone and just disable the game’s ticking clock (more on that in a moment). Between just four options I felt like I had enough control that I could play in a way that suited my personal comfort.

Which is good, because otherwise this game is tough as nails.

On what the game self-identifies as its “intended” difficulty, it’s tough to get through the world unscathed. Enemies hit hard – your six pips of health are effectively three, and you need to parry every hit to preserve them. It’s a risky business, and Unsighted thrives on the notion of risk-and-reward.

From the very start, your single health phial only fills up when you do damage, forcing you into a Catch-22 where the only way to heal is often to dive into more danger. So, what’s a robot girl to do?

The game gives you a few answers before you hit your first dungeon. Lowest-impact are “upgrade chips” you plug in like equipment. They run the gamut, from simple stat upgrades to fun effects like using sword-swipes to reload your pistol. They’re a start.

The very next are consumable “cogs”, temporary power-ups that you can choose to turn on at any time, or craft new ones at a save point. And I’ll congratulate Unsighted in that, for once, my “Defense Up” items didn’t just stew at the bottom of my inventory. But the most crucial of these, the Revive-On-Death cogs, aren’t renewable at first. So you’re still left with the lingering doubt of “is it worth betting on this one particular life”?

The harsher, longer-form bet is on time. Some games might give you a slightly-nicer ending for completing the game in under four hours. Unsighted requires it to a degree. The world here is dying, as are its inhabitants, and you’re grimly reminded so every time you strike up a conversation, right there in the NPC’s nameplates.

You can stave this off with “Meteor Dust”, found in chests across the world. But it’s a very finite resource, forcing the perpetual dilemma of whether you can afford to give it away rather than preserve your own lifespan. Or you could use it to buy the ever-crucial second health phial, throwing away three potential days of someone’s life.

There’s just never enough to go around, and that’s kind of the point.

The game’s other, fluffier way of lightening the load also roundly lightened my mood, which deserves a mention. One sidequest sees you save caged dogs throughout the world, after which you can bring them along. They’re a nice little addition, jumping at enemies to distract them and do a nibble of damage. I named mine Simu.

But like so many other things, they require upkeep. Every few minutes, they get hungry. Or they beg for your attention with a sad little emoticon. And, every so often, they’ll need to sleep away three precious (and deserved) hours.

Yes, you can pet the dog in Unsighted, and you’re encouraged to do so repeatedly.

While the game offers a few other play options, I couldn’t spend as much time with them as I might like.

I could see myself digging its rogue-adjacent “Dungeon Raid” mode. Nothing but you, randomly-chosen loot, and an ongoing gauntlet of “slay-the-enemies” rooms. There’s just something nice about a bottomless game. Its “Boss Rush” mode is a lot more straightforward in that regard, but I imagine no less satisfying. It’s never really been my thing, but many people thrive on that challenge.

Then there’s the sneaky suggestion of mastery around every corner. An NPC hints that the labeled numbers on the dungeons are “only a suggestion”. The game offers a speed-running timer in the core options menu. You can even outright skip picking up your first health phial to deliberately play an “iron man” run. All this on top of an initially-locked “Apocalypse” difficulty – the world is yours to make as harsh as you like.

And everything lets you plug in a second controller for local multiplayer. Given that the backup player takes reduced damage, it could be a nice addition for drop-in play, especially in the tougher extra modes.

But for all that elbows-deep discussion of the moment-to-moment gameplay, I have to pull back and say that Unsighted is a well-built package. The art and sound are top-notch. The story feels the right amount of heavy, but the individual characters in it are endearing. And once I got into the thick of it, I had one of those wonderful “oops-it’s-1-AM-and-I’m-playing-a-game” moments.

But it took me a while to finally get there with the world pressing in on me from every side.

For some, that’ll be stressful, and even exhausting. For others, it’s a thrill that they’ll thoroughly enjoy.

I hardly think it’s the wrong choice – a harsh post-apocalyptic world should feel harsh to survive in, after all. And the hack-and-slash-and-shoot gameplay is, once again, rock-solid from start to finish.

Still, you absolutely have to know what you’re in for. Unsighted will challenge you to enjoy it at times, to wrest your “good time” from the jaws of defeat.

But sometimes, you’ll want to have to fight for it.