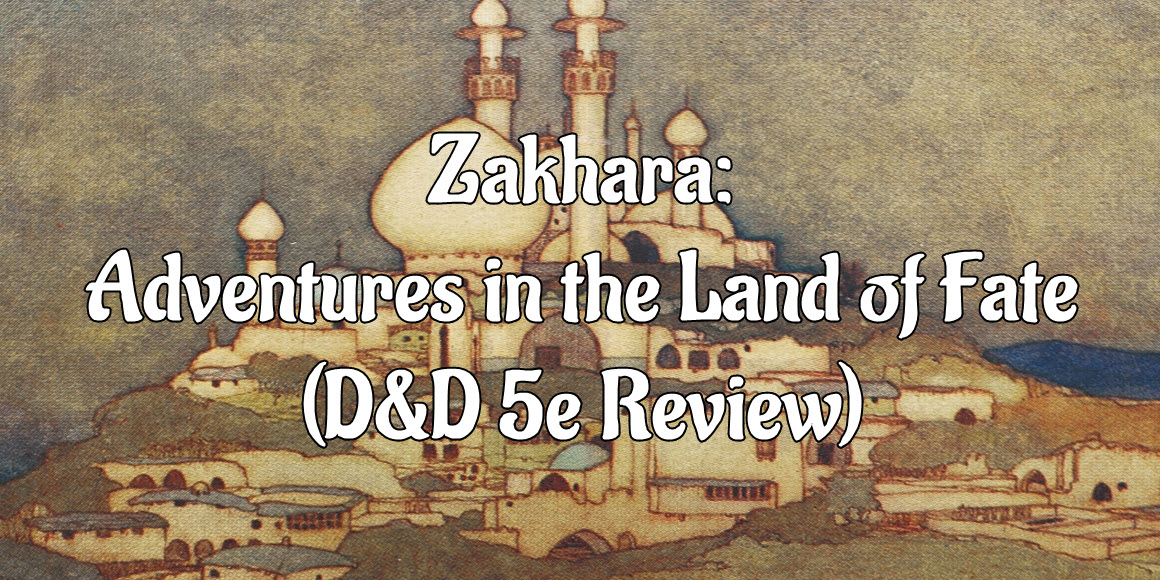 Zakhara: Adventures in the Land of Fate does Al-Qadim 5e Right

Disclaimer: The writers provided a review copy of this book via Dungeon Masters Guild. It has in no way affected the outcome of this review.

One of the worst things about coming to tabletop gaming and Dungeons & Dragons when I did (when D&D Third Edition was new) is that I missed out on a lot of the now-classic settings that older editions had. Settings like Spelljammer, Dragonlance, and Planescape have been left behind to make room for expanded Forgotten Realms lore and newer worlds like Eberron.

One of these left-behind worlds from AD&D days is Al-Qadim, a desert-themed setting full of genies, flying carpets, and seas of sand as far as the eye can see. The Zakhara Campaign Setting, though, revivifies it and updates the Land of Fate with new art, new mechanics, new player options, lore, monsters, npcs, and so freaking much more. This is Al-Quadim 5e. And it is glorious.

To say that Zakhara: Adventures in the Land of Fate is anything less than spectacular is an understatement.

As a non-Kickstarted, non-official, small-team sourcebook, GM Lent and Brock Sayre have put together something of higher quality than I’ve seen from high-profile campaigns. That is something to be heckin’ proud of.

Above, you can see the table of contents for everything that Zakhara brings to the Forgotten Realms. And it’s a lot.

Reading through this book is like reading a storybook in a lot of ways. It draws heavily on the Arabian Nights (or 1001 Nights), and I taught various stories and versions of that in my sophomore lit surveys for years. So while I don’t have first-hand experience with 2e Al-Qadim and miss out on a lot of nuance there, it kind of feels like coming home as I read about the Land of Fate.

Culture Shock: The Elephant in the Room

I first learned about Zakhara before it was released through a Discord server discussion about a Middle Eastern-themed sourcebook that a couple of white people were putting together. That could be a hot mess. But there was a good discussion where the authors chimed in with their processes, their sensitivity readers, and numerous other multicultural eyes they’ve had on Zakhara.

Ahmed Aljabry, a well-known and respected member of the TTRPG community, served as transliteration and cultural consultant for the book. This sort of thing is literally what he does.

So if you’re already thinking about cultural issues with Zakhara: Adventures in the Land of Fate, rest assured that the team has certainly done their due diligence.

Very briefly, I want to talk about the layout of the book because it’s beautiful. Even reading this PDF on an iPad feels like I am reading a storybook. I remember as a kid checking out The Arabian Nights from my public library, and it was a large hardcover with gilded pages. It was awesome. And that same feeling of texture comes through with the layout and design of Zakhara.

The art in the book itself is interesting. Color maps, parchment-backed letters, and full-page paintings break up the text every few pages.

I think even more impressive than the paintings and such are the black-and-white art inserts. These are reminiscent of the storybooks that I read as a kid and the old 2e Al-Qadim art that others hold just as dear.

All of this put together makes Zakhara one of the most pleasant campaign setting books to just scroll through and look at that I’ve seen in years.

D&D books live and die by their player options. And this one should live a pretty long life, I think. I’m a language nerd (I was an English teacher, so that’s a given), but I love that there is a table of Zakharan Archetypes where you can go through and see what different types of characters are called in the area.

This sort of table increases immersion for me, and honestly helps me think of new characters. And maybe more importantly–new ways to play them.

For instance, the Spellslayer is a “magic user who hunts and kills other magic users”, the Sa’luk is a “soundrel or general rogue,” and the Ethoist is a “preacher that acknowledges and tolerates many gods and/or faiths.” My favorite, though, is the Sha’ir, an “expert in genie lore and communication.”

With those in mind, you have kits, which are basically quick-build guides to these sorts of characters. You get a name, prerequisites, skill and tool proficiencies, and so on. Basically, these serve as backgrounds for the Al-Qadim 5e Zakharan characters.

There are also a number of new subclasses in the book, and while the book even says that “characters in Zakhara are not too different from those found in other settings” that doesn’t mean there aren’t cool new things to do.

My personal favorite is the Warlock Pact of the Lamp/Genie Patron. Maybe it’s because my own highest 5e character is a Warlock in Icewind Dale, but the idea of a genie-based Warlock in the sands of Zakhara is pretty appealing.

With a friggin’ genie familiar (!) and cool boons that let you use it for things like getting spells that aren’t on your list and that you couldn’t normally cast…I am in love. I want one. Now.

There are also Sand Sorcerers and Flame Wizards and…so much more. You really do need to read this book, is what I am saying.

And like any good campaign setting book, Zakhara: Adventures in the Land of Fate has a pick-up-and-play scenario called The Rat Catchers that will get you acquainted with the setting.

Ahlan and well met, my friend!

This 1st level starter adventure is set in Golden Huzuz, the City of Delights, and is intended as an introduction to the lands peoples of Zakhara! The party is hired to catch minor elemental creatures in some warehouses, but in the course of doing so they stumble across a far more sinister operation.

Featuring fire mages, ghuls, and other staples of Arabian Nights style fantasy, The Rat Catchers will entertain your group whether this is your first visit to the Land of Fate or your 1,001st!

Includes 6 pregenerated characters to help get you started.

While I haven’t had a chance to personally play it, it’s very well put together. I will most likely be pulling elements from it whenever my players make it to a desert area. (Which is incredibly likely to be Zakhara, to be quite honest).

The maps are high-quality and in color, already gridded, and…not just square with sharp edges! They have shape! Some of the rooms are round! I didn’t know how much that mattered to me until I saw it.

Heck, even the pregenerated character sheets have a ton of style. This is the sample they give on the Rat Catchers product page:

Wrapping Up with Zakhara’s Take on Al-Qadim

If you can’t tell, I am a really big fan of this book. I admit that I haven’t had a chance to use any of it at a table. But reading through it sure makes me really want to. In one of my campaigns, I have been planning to introduce a desert area for my players. Initially, I was going to use the Kobold Press Southlands setting. However, GM Lent and Brock Sayre’s Zakhara: Adventures in the Land of Fate makes me want to jump in the Al-Qadim 5e pool feet first.

This review didn’t even touch on the bestiary or a lot of the other fantastic content in here, though. But it’s there. And it’s great. Saying much more than that would make this review (even more) unwieldy. All that said, I think it is perfectly safe and reasonable to say that Zakhara rivals, in every way, any official WotC D&D Fifth Edition content out there.

Want more awesome Dungeons & Dragons content? Check out our review of Spelljammer: Adventures in Space and our list of the best Halloween adventures on DMs Guild!